No, the world around Floyd Mayweather isn’t crashing down because Marcos Maidana lost a way-too-close decision and gave him a real, actual busted-lip, bloody eyebrow fight.

Many of us, despite predicting Mayweather to beat Maidana decisively, acknowledged the fact that the Argentine’s unorthodox style and “who gives a fuck” mentality could present the five-division world champ with some troubling moments.

Nobody predicted, though, that Maidana would nearly beat Mayweather and give the sport the biggest upset since Buster Douglas beat the lisp out of Mike Tyson.

What was disturbing to see last Saturday night at the MGM Grand in Las Vegas was the degree with which Mayweather felt entitled to a victory without having to do much to get it. 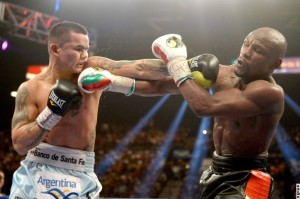 For much of the first six rounds of the bout, Maidana bullied Mayweather up against the ropes and punched at everything he could hit. Mayweather, in response, did little more than complain to referee Tony Weeks, occasionally throwing punches out of necessity, but otherwise waiting for the rounds to end.

And even when Mayweather began to create some distance and offer some offense, he seemed more peeved at actually having to work than focused on beating up Maidana. Truthfully, Mayweather has shown flashes of this entitlement attitude for a long time now, but never was it so highlighted than when matched up against a fighter with no pretense or sense of entitlement whatsoever.

But Mayweather has every right to feel entitled at this point. Really, how can he not feel entitled when judges and media are eager to give him any round not a total blow-out in the other direction?

On Saturday, he actually had every right to feel that way as two of the three judges somehow managed to give him four of the first six rounds. (My mega-unofficial scorecard had Mayweather down 2-4 after six– and I may have been somewhat generous myself)

The heavy betting favorite stepped up a bit, reluctantly so, in the middle rounds, but it was hardly a bull rush comeback. Mayweather just did a little bit more than the nothing he had been doing earlier, relying on his hand speed to land quick, easy to notice, and easy to score single right hands.

Mayweather did this from rounds seven to twelve, avoided getting beaten up along the ropes as much as possible, and exerted not a single bit more energy than absolutely necessary. There were flashes of brilliance and of what lurked beneath the surface of his indifference, but Mayweather looked to be merely putting in an appearance– a necessary evil in order to collect his check and keep playing celebrity.

Saturday’s performance was not a case of simply seeing chinks in the knight’s armor, it was a case of the knight not even bothering to put on his armor before battle. It was the first time that Mayweather, a fighter who always treated the sport with reverence and professionalism, just didn’t seem to care.

It looked as though he had to drag himself from his limo and suffer through this tedious boxing nonsense in order to get back to his back rubs, pedicures, and inane banter with the brain dead Justin Bieber and Lil Wayne. One never got that feeling before when Mayweather fought.

Afterwards, Mayweather talked about letting this fight become a brawl because he wanted to give the fans an exciting show. He talked about his new fan-pleasing style. The truth would’ve been a lot less appealing, but we won’t ever know the truth behind this showing. Maybe he just didn’t care one single bit about getting in the ring with someone he felt was so inferior. Maybe he couldn’t get motivated for what he thought was such a minimal challenge.  Maybe he just doesn’t care anymore..period. Fuck you, fuck your 70 PPV bucks, fuck what you think. You got to see him fight for twelve rounds, consider yourself lucky. Now, he’s back to the mansion, reminding his driver to pick up 500 Chicken McNuggets on the way.

A rematch with Maidana in September is likely and it won’t be hard for Mayweather to top Saturday’s dreary performance. A shutout next time is very possible because even a diminished Mayweather is still good enough to do it, but it won’t erase what we saw already. The king has grown jaded and complacent and holding the throne will be that much more difficult from this point forward.

The end of the “Money” era may not be here just yet, but it’s coming. And like most empires, it’s more likely to collapse from within than be destroyed from beyond.

You can email Paul at paulmagno@theboxingtribune.com or watch as he outrages boxing nerds everywhere. You can also buy his book, Notes from the Boxing Underground! Paul is a full member of the Burger King Kids’ Club, a born iconoclast, and an ordained minister in the Universal Life Church.