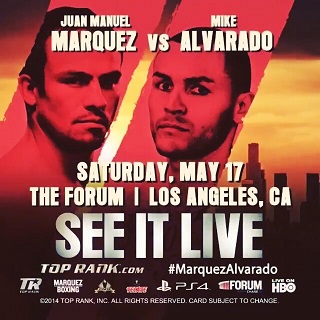 Marquez will be seeing his first in-ring action since dropping a split decision to then-WBO welterweight titlist Timothy Bradley. Not surprisingly, Marquez vehemently disagreed with the decision, but has not let it distract from his goal of becoming a four-division world champion. One of the big storylines hovering around this promotion (and around Marquez over the last two years), is his bid to become Mexico’s first five-division world champion. Marquez, who now enters the 22nd year of his career, has won world titles as a featherweight, junior lightweight, and lightweight. As a junior welterweight he won only the interim version of the WBO’s belt, meaning his claim to four world championships doesn’t quite pass the smell test. In any case, Marquez’s career is worthy of a hall of fame induction some five years after he finally chooses to hang up his gloves and boots and walk away from the sport.

Alvarado, like Marquez, comes into Saturday night’s fight coming off an October loss. Alvarado was stopped in ten rounds against a hard-charging Ruslan Provodnikov, just one week after Marquez’s loss to Bradley. Alvarado, who looked like proof of living death at the weigh in for his fight with Provodnikov, has moved up in weight and says he’s more comfortable and will be stronger at welterweight. Alvarado’s career briefly stalled when he was twice sent to jail after violating his probation stemming from “traffic- and driving-oriented offenses and an earlier domestic violence charge”. He returned after missing most of 2009 and the early part of 2010 with quick stoppage win over Lenin Arroyo. It was his 2011 come-from-behind stoppage win over Breidis Prescott that started Alvarado’s ascent to the big stage. He followed up the win over Prescott with a decision win over Mauricio Herrera before going 1-2 against Brandon Rios (1 win, 1 loss) and Ruslan Provodnikov.

The winner of this fight will have likely punched his ticket to Macau to square off against Manny Pacquiao in the fall. The pool of viable Pacquiao opponents has dried up and more closely resembles a small puddle at this point – and Marquez and Alvarado are the top two contenders.

Marquez was long known for his counter punching and somewhat cautious approach to his offense. But as he’s aged and moved up in weight, he’s shown a greater proclivity to throw caution to the wind and slug in the trenches. He’s still a great counter puncher with a knack for setting traps that lead to big highlight reel counters (see Pacquiao-Marquez IV, round 6), and he still possesses the ability to get up from big knockdowns, survive, and even come back to win.

Alvarado has the height and reach advantages over Marquez. He should be looking to use those to his advantage, and lay down a solid foundation of jabs, jabs, and more jabs. But even as the taller, longer fighter, he must be wary of getting lazy with his jab and eating a Marquez counter right over the top. And along with the right hand counter over the top of Alvarado’s jab, Marquez should look to dip inside of his jab and throw his counter-right short and down the middle, followed up with a left to the body. If Alvarado is able to establish an effective rhythm with his jab, he should be able to land his right hand behind it from range, as Marquez is very hittable when he’s on the offensive. Alvarado should avoid getting drawn into a firefight, as he’ll only fall right into Marquez’s traps. He won’t be able to outbox Marquez, but he should look to use his height and reach and every available inch of the ring.

Mike Alvarado showed he has the boxing acumen to ignore his brawler’s instinct and effectively outbox his more aggressive opponent. But that was against base-level brawler Brandon Rios. Juan Manuel Marquez is a master technician with more than 20 years’ experience, and even at 40 years of age he’s shown few signs of decline. The natural size and strength advantages will reside with Alvarado, but Marquez will control the action and dominate the fight, cruising along to a unanimous decision win and an eventual fifth fight with rival Manny Pacquiao in the fall.