As one of my fellow-writers recently and correctly asserts, a power outage seems to exist among today’s boxing stars: see http://theboxingtribune.com/2014/05/power-outage-boxings-biggest-stars/ but if its power and excitement that is in short supply, Argentina (and, of course, Easter Europe) might have what the fans crave.

“Abregu may not have the same big wins Maidana has, but he is every bit as exciting.”—Sean Gibbons, Abregu’s agent 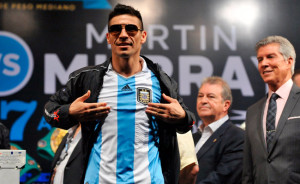 Luis Carlos “El Potro” Abregu has shown that he is willing to fight outside of Argentina and has run up a 36-1 mark with his lone defeat coming at the hands of Timothy Bradley in 2010 in California. The combined record of his last three opponents (Jean Carlos Prada, Antonin Decarie, and Thomas Dulorme is 73-1-1. He has a KO percentage of 78.39% and won the vacant WBC Silver welterweight title with his win over Canadian Decarie.

Sergio “Maravilla: Martinez (51-2-2), the heavy-handed WBC middleweight title holder needs no narrative. Suffice it to say that he will cement his place among Argentinian legends if he can beat Miguel Cotto (38-4) when they face off on June 7 in what should be a Garden barnburner.

Lucas Mattysse (aka La Máquina -The Machine) is at 35-3, has an astonishing KO percentage of 84.62%, and showed that he is ready to rock and roll and fight like a wrecking machine after his Fight of the Year-type war with John Molina on April 26. Matthysse was down in rounds 2 and 5 and cut over his left eye in round 3 from an accidental head butt. Molina faded and went down in rounds 8 and 10. Finally, Referee Pat Russell waived off what has become e slaughter despite the recalcitrance shown by Joe Goosen, John’s “brave” manager.

“I will be happy to give Mayweather a rematch”—Marcus Maidana
Like Martinez, Marcos “El Chino” Maidana (35-4) needs little introduction. This exciting fighter has gained lasting fame for his focused and non-stop mugging of the brash Adrien Broner (27-0) and shocking near-mugging of the great Floyd Mayweather Jr. Not since the first Jose Louis Castillo fight has anyone given Mayweather so much trouble. The interesting thing is that Chino went the distance both times but still has a gaudy 79.49 KO percentage. And like “El Potro,” he will fight anyone anywhere in the world.

Narvaez (42-1-2) was the first boxer from the 2000 Olympics to capture a major world title. Overlooked and underrated throughout his 14-year career, he currently holds the WBO super flyweight title which he has defended successfully 10 times. He also won the WBO flyweight title in 2002 which he defended a remarkable 16 times surpassing the record of the immortal Carlos Monzon.

When he stepped up to bantamweight in 2011 and lost a one-sided, jeer-generating decision to Nonito Donaire in New York City with the WBO bantamweight title at stake, it prompted vicious insults from the always noxious Bob Arum and the equally insulting (but newly minted journalistic giant) Dan Rafael.

However, it was not nearly as bad as Arum and Rafael made it out to be. The southpaw technician and defensive wizard Narvaez took away Nonito’s signature left hook but could not mount any offense of his own. If the Argentinian was playing it safe (by using a Clottey-type turtle shell defense), so was Donaire who was expected to blow away Omar but chose to box instead. It takes two to tango and “the Flash” simply did it much better.
Over the course of his career, the 38 year-old Narvaez has fought solid opposition showing a propensity for equal opportunity victories. Among his victims was the infamously dirty “El Mosquito,” Louis Alberto Lazarte, the talented ex-world champion Brahim Asloum 21-1), Feliciano Dario Azuaga (67-7-2), Russian Alexander Makhmutov, Felipe Oracular (27-1), and Ceasar Seda (20-0).

While the Donaire affair was a bad one, 42 wins and 2 draws against just one loss cannot be ignored, nor can his record breaking number of title defenses. Moreover, the high ranking Omar might just do something spectacular during the remainder of his career—like waxing Daiki Kameda, or taking the measure of the winner of the big Carlos Cuadras vs. Srisaket Sor Rungvisaiin fight set for May 31 in Mexico City.

Reveco (33-1) is currently the WBA Regular Flyweight champion. In June 2007, he knocked out undefeated Nethra Sasiprapa to capture the Vacant WBA Light Flyweight Title, but lost the title in his first defense to Brahim Asloum on December 8, 2007 in a close decision in France. He won the Vacant WBA Interim Light Flyweight Title on December 18, 2009 against Ronald Barrera, and was later promoted to full champion In February 2011, he vacated his light flyweight title in order to be ranked in the flyweight division In a letter to the addressed to the World Boxing Association, Reveco requested to be made mandatory challenger in the 112 lb category, and then waxed WBA interim titleholder Jean Piero Perez to win the interim WBA world flyweight title. He has since protected his title six times; twice as an interim crown and four times as the sole champions.

Like Narvaez, Revco is no monster puncher but he is an excellent boxer who knows how to win. His upcoming match with Nicaraguan mini-bomber Felix Alvarado (18-1) on June 6 will determine for certain whether Juan Carlo’s inclusion in this group is justifiable.