It sure would be nice if the boxing world could unanimously agree that a fight like Juan Manuel Marquez vs. Mike Alvarado last Saturday was “just” and “only” a boxing match. This would mean that the issue of performance enhancing drugs (PEDs) would not be an issue. In a perfect world the suits behind the scenes would actually be screening for such things and organized in such a way as to be able to take quick, decisive action if any red flags pop up.

But boxing is far from a perfect world and it doesn’t take a BWAA decoder ring to realize this. The lack of centralized authority and a failed state commission system has turned the regulatory business of the sport into pure chaos. 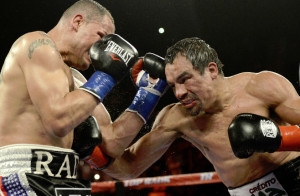 And this chaos presents the opportunity for creeps, crooks, and grandstanders to do whatever the hell they feel like, with few repercussions.

Max Boxing’s Gabriel Montoya, who has written extensively on the PEDs issue, recently wrote an article that pretty much sums up all that’s wrong in a sport that refuses to regulate itself and leaves everything up to suspicion and accusation.

Humorously, Montoya begins “Marquez-Alvarado: from Chemical Warfare to Collective Amnesia” with the sentence “I’ve never been into character assassination” before assassinating the hell out of Marquez’s character through catty insinuation throughout the article. Characteristically devoid of any sort of self-awareness, Montoya plays through the teenage girl pathology that has, in my opinion at least, defined his professional career– Friends and partners can do no wrong, while enemies and outsiders are forever shadowy figures, up to no good and worthy of scorn. Bring his attention to this odd tic in reasoning and, now, you have become the absolute enemy.

Montoya points an angry finger at the media for not asking the “tough question” about PEDs, yet the “PEDs Guy” doesn’t really practice what he preaches in the area of hard-hitting media scrutiny.

To be completely fair, on a list of dubious, red flag-generating physical achievements from dozens of fighters over the last several years, Marquez’s KO of Pacquiao is just one of several.

But Marquez works with Angel “Memo” Heredia, an aforementioned one-time confessed PEDs cheat, and more importantly, one who has had several heated back and forth exchanges with Montoya via social media and is squarely playing the role of “us” to Conte’s “them” in the Montoya pathology.

For those familiar with my weekly Rant, it’s safe to say that it is never my intention to defend the often shockingly stupid and compromised boxing media. But maybe there are some writers—like myself—who feel awkward about insinuating guilt on another man without having any proof whatsoever. Maybe some are indeed afraid to ask the “tough questions,” but maybe some are just trying to be decent, fair-minded human beings. What kind of professional drags a fighter’s name through the mud because he looks like he may be guilty?

The point of this week’s Rant is not to spotlight my disdain for two-faced creeps, although it’s surely not breaking my heart to do so. Guys like Montoya are merely the unfortunate byproduct of a sport without regulation. The truth is that in a boxing world doing its job, there’d be no place for well-placed innuendo or self-righteous finger pointing because we’d trust that the regulators would be regulating so that all we had to do was focus on the actual sport.

The point is that in a world where there are virtually no rules and standards, taking anything but the most general of moral stands is an intellectually dishonest exercise in ego. If Marquez, Pacquiao, etc. are on performance enhancing drugs, we surely have no definitive proof of it and there’s no mechanism by which we can really tell, given the woeful lack of regulation in the sport and the ability of the cheaters to perpetually stay two full steps ahead of the system. We may have our suspicions and those suspicions may be well-founded, but only a true creep would be willing to crucify a man and publicly soil his legacy based on suspicion and suspicion alone. It’s a classless move aimed at drawing attention to the accuser rather than actually work towards the truth. It’s a desperate stab at stroking one’s ego at the expense of the cause you purport to support.

By turning PEDs into a my camp vs. your camp pissing contest, Montoya, and those with a personal interest in fogging up the debate, have made this very valid discussion point into a meaningless screaming match, second in intensity to the mindless Pacquiao vs. Mayweather chatter on just about every boxing message board these days. Montoya’s initial positive efforts in educating the boxing public on the technical aspects of the PEDs problem are now lost in a haze of VADA vs. USADA banter, laced with diva drama with other writers and a more than occasional hissy fit to emphasize that as one veteran scribe once told me, “He’s not all there.”

Much of the problem regarding the current DIY trend in PEDs testing comes from the fact that in pure voluntary mode, the inmates are pretty much running the asylum. With promoters, fighter management, and even shadowy third parties handling all the particulars, how can the process NOT be tainted? No centralized authority and no across-the-board standards in the area of PEDs reform have been established throughout this whole discussion. And while writers and fans hurl accusations and engage in social media flame wars over the most salacious aspects of this spectacle, the reality of the situation gets further buried in the mess.

The temporary appeasement offered by voluntary PEDs testing is a typical boxing response to a major issue—the appearance of propriety being the chief aim of the sport’s power brokers. But, like suspending an occasional inept judge has done nothing to fix the sport’s judging issues, voluntary testing is merely a deflection.

In a land where there are no real answers and not even the slightest hint of confidence in authority, rumor and distrust rule. And from that atmosphere of rumor and distrust, creeps of all sorts tend to pop up, some with nothing but self-aggrandizement in mind, some with more devious goals, but all actually adding to the problem. Boxing has had similar problems from the very beginning, but no issue has been quite as life-and-death important as the issue of doping.

If anything, the mess created by pointing fingers (but never attempting to address the actual regulatory issue at hand) is probably convincing more and more fighters that PEDs are a must in order to stay competitive.

You can email Paul at paulmagno@theboxingtribune.com, just be aware that he doesn’t really care about your fraternal secret society, your need for a hug, or any unresolved Daddy issues you may have. But you CAN buy his book, Notes from the Boxing Underground! Paul is a full member of the Burger King Kids’ Club, a born iconoclast, and an ordained minister in the Universal Life Church.