Carl Froch vs. George Groves: The Cobra vs. The Saint Part 2

When Carl Froch (32-2, 23koes) and George Groves (19-1, 15koes) face each other in the ring again this Saturday, May 31, at Wembley Stadium, London, to compete for Froch’s WBA and IBF world super-middleweight titles, it will be the most anticipated clash between two British boxers since the rivalries of Nigel Benn, Michael Watson, and Chris Eubank in the 1990s. The controversy of the first clash last November between the pair, has served only to heighten the intrigue and anticipation that surrounds this match. In addition, it underlines the genuine animosity and dislike which seems to visibly seep from both fighters when they are together. After all of the drama and excitement of the first fight, the rematch does not really need the 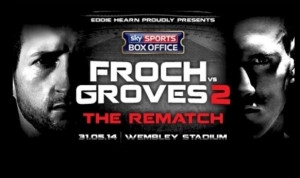 extra publicity provided by both men not liking each other, (although promoter Eddie Hearn would probably disagree). But the dislike is there, and it is real. Sometimes uncomfortably so. In a sport where serious injury is always a dark possibility, there is something unsettling about seeing such intense ill feeling between both men in the run-up to their rematch.

These are two men who seem to genuinely want to harm each other in a fight in which the stakes couldn’t be higher for either man. For Froch, victory will wipe out the controversy of their first bout last November, and be another step to cementing his legacy as one of Britain’s most outstanding fighters of recent years. However, defeat at the hands of Groves, would be a disastrous result for ‘The Cobra’, underlining the controversy of their first fight, and signalling the end of Froch’s time as, not only one of the elite 168-pounders in the world, but most damagingly, his status as the best super-middleweight in Britain. While Froch’s defeat to Andre Ward, rated one of the best fighters pound-for-pound in the world, was not overly damaging to his legacy, defeat to Groves, until now a largely unknown domestic fighter, and would be far more detrimental. The stakes for Groves, on the other hand, are equally high. Victory on Saturday will be seen as vindication of his claims that he was robbed of a probable triumph in November, and will catapult Groves onto the world stage as one of the elite fighters at 168. A loss for Groves would also be a severe setback, although he has youth on his side to come again at world level, a second loss to Froch will place Groves back into the queue of contenders waiting to receive their title shots.

Whoever loses on Saturday will take a blow to their prestige, even more as the fight has become such a personal matter between the two men. Defeat for Froch, depending upon the manner it comes, could mean the end of ’The Cobra’s’ career. Would Froch at almost 37-years-old want to put himself through it all again even if there was a proposed third fight?

The conclusion of their first fight is still highly talked about and controversial. After flooring Froch heavily in the 1st round, Groves went on to largely dominate the next 5 rounds, before allowing himself to being dragged into a brawl in the 7th and 8th rounds, as if to show that he could out tough Froch as well as outbox him. This was a bad mistake on Groves’ part, one that led directly to him being prematurely stopped by the referee in the 9th round, when Froch seemed to have finally got him into some trouble.

The ending of their first match, at such a crucial point in the contest, left many questions unanswered. Had the fight been allowed to go on, would Groves have recovered his composure and gone on to score the upset win, or was Froch on his way to grinding his challenger down, like he has so many other opponents in the past?

Six months later, how will champion and challenger approach the rematch and what adjustments will they make? Out of both men, Froch is the one who seemingly needs to change most when the two clash again this Saturday. Froch is in the rather peculiar position of having had the worst of their previous fight, despite emerging the winner. Froch was quite clearly both out-boxed, out-punched, and the change of the course of the fight in the 7th and 8th rounds seemed to come as much from an overconfidence on Groves part, as it did from anything that Froch was doing.

On one hand this could bode well for the champion, as he simply cannot have a worse start to the rematch than he did the first fight, then again, there remains a chance that ‘The Cobra’ has simply met his match in ‘The Saint.’ Have all of the wars of the past half dozen years, fighting at world level, finally taken a toll upon ‘The Cobra’. Father time catches up with everyone in the end, and Froch, despite his dedicated fitness, will be a few days away from his 37th birthday when he meets Groves for the second time on Saturday.

Against Groves, he is facing someone who is younger, faster, rangier, and a technically better boxer. For much of his career, Froch has overcome his technical deficiencies through his sheer toughness and fitness. In November, Froch looked sluggish and wild, with his footwork flat and uncoordinated and his reactions slow. Froch’s defence, which has never been his strongest asset, seemed to be at times almost nonexistent. The crucial question hanging over the champion is whether he still has more to give than he showed in November, or is the well finally running dry? There is a chance that Froch will get into the ring on Saturday and find that it is just not there anymore.

It would seem that Groves only needs to repeat what he was doing in November up until the 7th round, until he allowed himself to be pulled down into a brawl by Froch. The major question for Groves is was his descent into a brawl with the champion due to overconfidence and inexperience, or, a lack of stamina and durability. Groves seems to have the upper hand over Froch in most areas, including technique, age, speed, and size. The one crucial area in which he may be weaker than Froch, aside from experience, is stamina and durability. Saturday’s rematch will tell us much about whether Groves has the durability to succeed at the top level, or whether he is a little lacking in this area.

There seems little possibility of Saturday’s fight being anything other than dramatic and violent. The controversy stemming from the first fight, plus the animosity felt by both men for each other; seem certain to produce a showdown full of emotion. This may well suit the champion, far more than the challenger. The key to victory for Froch is to drag Groves into a slugfest, just as he did in the later rounds of their first fight. Groves, despite his first round knockdown of the champion in November, needs to stick to using his superior boxing skills and speed, rather than trying to prove that he can out-slug and out-tough ‘The Cobra’. Froch, even if he is in decline, still looks to have too much experience and durability for the challenger if the fight becomes one of trench warfare again. The challenger’s recent claim that he will finish the champion in 3rd round this time, could be a clue that ’the saint’ is perhaps over confident.

There seems to be two most likely possible outcomes to Saturday’s showdown. The first is that Groves utilizes his superior boxing skills and boxes his way to a point’s victory and the second is that Groves ends up going to war with Froch, either from his own choosing, or from Froch’s constant pressure. In this instance, a win for Froch via a late round stoppage or a close, perhaps controversial point’s decision is a strong possibility. One hopes that whatever the final outcome of this rematch, there is no room for controversy this time.