This Friday in Moscow, heavyweight contenders Alexander Povetkin (26-1, 18 KO’s) and Manuel Charr (26-1, 15 KO’s) square off in a scheduled 12 round contest at the Luzhniki Stadium. Up for grabs is the vacant WBC International heavyweight title. Also at stake for the former Klitschko victims is a shot at the WBC heavyweight crown, recently won by Bermane Stiverne. It would be a second shot at world honors for Charr and a chance for Povetkin to become a two time title holder having been a former WBA champion. 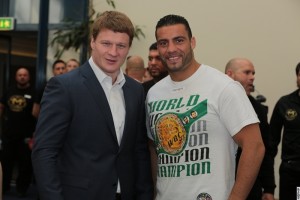 Save the knockout tally, both fighters come in with identical records and with the same last name accounting for their lone defeat. Charr fell victim to Vitali Klitschko in 2012 in his challenge for the WBC heavyweight crown. After being dropped in the second frame, the fight was stopped two rounds later on a cut despite Charr’s protests. Klitschko himself wasn’t thrilled with the stoppage, but shrugged off a protest filed by the challenger, stating to Boxingscene.com, “Another round or a maximum of two, and Charr would have been on the floor”. The loss didn’t appear to have any lingering effects on the regional title holder, he went on to rack up five wins, four by knockout, and win four regional belts: the WBC Baltic, WBC Mediterranean, WBC International Silver, and the WBC CISBB heavyweight titles are all in his possession. Last month he scored a wide decision over former world title challenger Kevin Johnson, one of the better fighters on his resume though Johnson is steadily gravitating towards “opponent” status as of late.

This being his first bout since a one sided loss to Wladimir Klitschko in October, it’s a bigger test for Povetkin. The former WBA World title holder hit the canvas four times that night en route to a shut out decision loss. Prior to Klitschko, Povetkin had a decent run as “one of” the heavyweight champions; winning the vacant title in mid-2011, he went on to make four successful defenses scoring three by knockout. Overall, his list of opposition reads better than that of Charr; Eddie Chambers, Marco Huck, and Ruslan Chagaev among his more notable victories.

It’s a winnable fight for Povetkin if he can put the Wladimir loss in the rear view mirror and move forward, something Charr’s already done. It certainly appears that the Russian contender is in top form and highly confident in a victory, calling Friday’s contest a “tune up fight”. Charr is just as confident, and can be the one that jumps ahead in the world title picture if Povetkin doesn’t bring his “A” game.