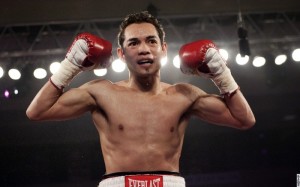 The melee began honest enough with both men forgoing the feeling out process in order to crush each other’s faces with their fists. By the conclusion of the first round, the combatants began flinging Hail Mary shots as the bell was sounding – causing a deep gash on the eyelid of the challenger Donaire. Whether that shot was caused by accidental clash of heads, elbow or legitimate punch remains to be seen as the camera angles were wonky at the time of the impact.

Obviously bothered by the ineffective cut work done in his corner, Nonito Donaire took it upon himself several times throughout the course of the fight to halt the action (a move which was apparently encouraged by referee Luis Pabon) and take a leisurely visit to the ringside doctor for a quick clean up…

By the fourth frame – and with the help of several doctor visits to cleanse the gashed eye of blood – Donaire managed to score a solid knockdown of Vetyeka whilst both men were swinging wildly against the ropes, the champion managed to regain his composure and smother the rest of the Filipino’s work.

After what ended up being the fourth and final round of action, the referee somehow stopped the bout – even though Donaire had stated several rounds earlier that he was unable to see – and the fight went to the cards conveniently after the round that was needed for the match to go from ‘no contest’ and into the judge’s hands.

To his credit, Donaire seemed unhappy with the outcome and offered to give the now former champ a rematch. With that victory, Nonito Donaire’s record advances to 33-2, 21KOs.