Often times in boxing, things aren’t really as they have been hyped to be. Bad guys can be good, tough guys can really be weak, and the weak can find strength from somewhere deep inside their being. 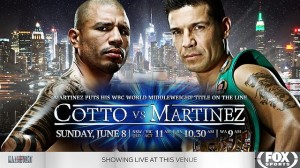 Sergio Martinez (51-2-2, 28 KOs) and Miguel Cotto (38-4, 31 KOs) are both, to a great extent, not the men boxing’s publicity machine has made them out to be. Their strong characters and well-established back stories have created the myth around their realities, but the reality is a lot more complex.

And when they meet this Saturday night at Madison Square Garden in New York, fans will likely see a bit of both fighters in all their complexity.

The square-jawed Martinez, for example, with his movie star smile and penchant for designer clothing, has been frequently portrayed as a vacuous diva by a disturbingly image-obsessed boxing media and called “Zoolander,” in reference to the Ben Stiller film about a dim-witted, self-obsessed male model.

And while this image has persisted, influencing the way many ultimately judge Martinez’s ring work and legacy, the truth is far from that easily-made, poorly-conceived dig.

One looking for a glimpse into the heart and soul of the Argentine southpaw need look no further than his last bout in April of last year.

Fighting in Argentina for the first time in over eleven years and with 40,000 fans on hand, the weight of the world was on Martinez’s shoulders as he dragged a broken-down body through a war with the tough-as-nails and legitimately well-regarded Martin Murray. Martinez fought hard and fought bravely with a knee and hand that would have to be surgically repaired after the bout.

Despite the pressure and despite suffering a knockdown and despite the sheer pain of trying to get some sort of traction from a torn-to-shreds right knee slip-sliding on a rain-soaked canvas, Martinez not only fought on, but established his dominance in the last two rounds of the fight to secure the unanimous decision.

As a matter of fact, going back a bit, if one overlooked the awful scoring travesty of his first bout against Paul Williams and the brutally inept officiating of what should’ve been a KO victory over Kermit Cintron, Martinez should be undefeated since losing to Antonio Margarito in 2000.

And in that span of fourteen years, Martinez, despite having received a reputation as a slick boxing stylist, has faced some tough opposition and some tough moments that a “Zoolander” could not have handled. To make matters more complicated, up until fairly recently, Martinez has had to make a name for himself in a middleweight division lacking in depth. Assembling a mix and match opposition hit list of wildly varying styles and abilities, Martinez has mostly fought for short money against the dreaded “best available opposition.”

From Kelly Pavlik to Paul Williams to Darren Barker and Matthew Macklin, Martinez never had the luxury of picking the “right” opponent for his style. He’s always been at the mercy of nobody-left-to-fight destiny and had to doggedly pursue the one big money fight available to him at the time, against Julio Cesar Chavez Jr. in 2012.

As luck would have it, though, fighting a twenty-something human wall like Chavez, who has been known to rehydrate into a cruiserweight by fight night, may have led to Martinez’s career-threatening recent injuries.

After cruising through eleven and a half rounds of domination over the befuddled and paralyzed Mexican star, Martinez would get caught by a skull-crushing shot that put him down and nearly out. The consensus middleweight champ, who possessed no recognized world title at the time, would have to muster up the resolve to survive. After the bout, it was revealed that he had sustained serious damage to both his hand and knee, presumably from years of wear and tear, aggravated by the drain of being a small middleweight having to fight a cruiserweight.

Now, at 39 years of age, Martinez is likely one or two bouts away from either ending his career or being forced out. His injuries may or may not have completely healed and, by the time his bout is over with Miguel Cotto on June 7 at Madison Square Garden, we’ll likely see more grit than flash from the WBC titlist. Yet, still, in some pockets of the media, his toughness will be called into question and the picture will be painted that Martinez somehow bedazzled his way to favorite son status without really earning it.

Miguel Cotto Has A Bit Of The Jackrabbit In Him

Unlike Martinez, Puerto Rico’s favorite active battler, Miguel Cotto, will always get the benefit of the doubt when it comes to his career and legacy.

Cotto,33, is the stoic, ass-kicking archetype of a million macho boxing fantasies and has left behind enough broken bodies to deserve the fawning praise of bloodthirsty fight fans everywhere.

The one constant in Cotto’s career has been that, if you’re not really ready for Miguel Cotto, he will eat you alive.

From Rocky Martinez in 2003 to Delvin Rodriguez in 2013, Cotto has butchered opposition that shows the slightest hint of flinching and, very often, beats the “flinch” into those who don’t.

Cotto is and has been what a fighter is supposed to be, at least to those looking to boxing for the bad-ass hero proudly walking into battle. Even when showing that he may be both more and less of what the boxing world expects of him, Cotto’s offensive mastery and tough guy demeanor have allowed him to keep playing the role he has played for much of his fourteen-year professional career.

Those with a deeper understanding of Cotto as a fighter will recognize the stylistic schizophrenia that has kept him one notch below the true elite of the sport like Floyd Mayweather and Manny Pacquiao.

Essentially self-trained for most of his career and left to run his workouts the way he likes, Cotto mastered just about everything, but has, at times, had trouble integrating all the parts into a cohesive whole.

The biggest chink in his armor– a slight, awkward hiccup between shifting from offense to defense– has been exploited to some degree by everyone with at least a hint of the world class in them. To Cotto’s credit, though, the openings may be present, but it’s a time-tested fact that very, very few are good enough to exploit those flaws consistently.

Dig a little deeper, though, and you’ll find that one of boxing’s baddest assassins can be beaten into retreat mode and almost falls into an instinctive, frantic scurry for safety when hurt or threatened to be hurt. In more colloquial terms, Miguel Cotto has a bit of the jackrabbit in him and, because of that, has a career defined by going as far as his opponent allows.

More than just a fluke occurrence, bouts with Bazan, Mosley, Margarito, Clottey, Pacquiao, and even Mayweather have shown glimpses of varying lengths into Cotto’s flight over fight reflex when hurt. And it’s no coincidence that these moments have mostly come against bigger opposition at increasingly higher weights as his defensive liabilities have met with the natural limitations of a fighter moving from junior welter to welter to junior middleweight.

But still, even with a bit of the jackrabbit running through his soul, it takes a mighty specimen of a fighter to bring out the worst in the Boricua battler.

What Cotto does well, he does almost flawlessly well and with Freddie Roach working to smooth out some of the rough edges, it may be just a little bit harder to push him to his breaking point. At this point, nothing can really change Cotto all that much and it’s debatable whether a man’s character, once already formed, can be changed at all. But it is possible to hide some of the defects and mask the character flaws behind some boxing sleight of hand. Roach may or may not be able to do this.

Cotto is fighting this Saturday for his place in history. He wants to become the first Puerto Rican fighter to win world titles in four weight classes. Because of this, there may be some real urgency and extra raw ambition behind his fighting– which could be either a good or bad thing, depending on how Martinez handles himself.

The Fight, The Outcome

On Saturday at Madison Square Garden in New York, what we’ll be seeing is a battle between two fighters who are easy to label, but hard to pigeon hole.

It’ll be Martinez, as the cautious boxer, who becomes deadly when pushed into being the proud warrior vs. Cotto, who stalks his prey as the fearless hunter, but falls back on absolute caution when hurt. Both are killers, both are divas, both are looking to cement their legacies with this high profile bout.

Miguel Cotto is not as fearless as billed, nor as brutish as labeled; Sergio Martinez is not as much a ring stylist as he is a precision brick thrower.

Conventional wisdom may lead us to believe that Cotto-Martinez will begin with Cotto stalking and Martinez boxing– and that would be very good news for Cotto, who prefers to come forward and hunt his prey rather than be pressured.

However, the winner of this bout may be the fighter who comes out of his comfort zone to take away his opponent’s advantages.

Martinez will need to hit and hurt Cotto early to keep the younger challenger from turning the fight into a battle of attrition inside the pocket. Cotto, on the other hand, will need to use his footwork, reflexes, and laser-sharp jab to always have a glove touching Martinez’s head or body. Simply put, the winner will be the one who executes this identity swap the best.

Martinez’s injuries are a major intangible in this fight and, given the fact that he won’t be allowed to use his knee brace for the bout, things could get real ugly, real fast if the 39-year-old begins to fall apart (UPDATE: The NYSAC has ruled that Martinez can use a “sleeve” on his knee, but no brace). All it will take for Martinez’s reflex-based style to become a detriment is a slowdown of a fraction of a second– and that could happen from injury or just, plain age.

But taking all things into consideration, this should be Martinez’s fight to lose. If he does what he can do and manages to land something big early in the fight, he can control the space and pace of the bout for as long as it lasts.