I believe Martinez will press Cotto early to try and impose his size on his smaller foe. But If the champ fights the way he’s always fought, with his hands down and face exposed, he’ll be a 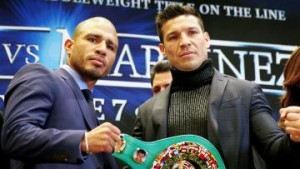 perfect target for a Cotto jab that knocked down an iron chinned Joshua Clottey and bloodied pound for pound king Floyd Mayweather. I see Martinez— a southpaw—giving Cotto trouble with his speed and punches straight down the middle, the same way Manny Pacquiao did in 2009. Cotto’s jab will make it interesting, but even with his injuries, I think Martinez has enough in his tank to win one last big one. Sergio Martinez wins via split decision.

The outcome of this contest is all up to Martinez. With the advantage in height, reach, and hand speed, the outcome will hinge on how much he has left in the tank at 39 years old, after knee surgery and over a year out of the ring. Though the middleweight champ has shown signs of decline recently, Cotto hasn’t beaten a prime world class fighter in years and while Martinez isn’t in his prime either, he has ruled the middleweight division since 2009 while this is Cotto’s first trip past the 154 pound class. Cotto’s best chance is in the later rounds when Martinez has shown to be most vulnerable but as the smaller fighter I can’t see him having a real shot at scoring a knockout when bigger, stronger fighters have failed. This one will go the distance, and Martinez will probably taste the canvas before the fights end, but he’ll outbox Cotto along the way en route to a comfortable unanimous decision.

This is an intriguing fight as both boxers are past their peak, and a lot depends upon which man has the most left from his prime. As Cotto is the one moving up it would seem that Martinez would have the size advantage, but this isn’t really the case as Sergio is a relatively small middleweight by today’s standards, while Cotto has always been a big Welterweight/and light-middleweight. Martinez’s advantage is his speed and cleverness, he should be able to outbox Cotto, but this depends on how good his legs and reflexes are now, after repeated injuries, inactivity and age. Cotto looks to be the stronger and more solid of the two men. Martinez has always had a slight fragility about him and now as he ages and his reflexes and speed fade he maybe ready for the taking. If Martinez cannot raise his form above that which he showed against Michael Murray in his last fight then I think Miguel Cotto will prove to be too strong for him and win by a knockout or stoppage in about 8 to 10 rounds. If however Martinez can reproduce the kind of form he had against Chavez Jr or Paul Williams, then he can win a hard fought contest on points or via a late stoppage.

Let’s get one thing straight, Sergio Martinez is no Delvin Rodriguez. Not only is the pride of Caguas, Puerto Rico moving up in poundage to unfamiliar territory, but he will be facing a legitimate “A” side champion – regardless of who enters the ring first. While Miguel Cotto will have some moments, particularly early on, “Maravilla” puts on a show in front of the pro Cotto crowd and reminds fans that his less than excellent showing against Martin Murray last year was due to a now (mostly) healed injury. Martinez by controversially close SD.

This one will turn on whether Martinez comes into the fight healthy and fit as Cotto could likely beat the Martinez that won a close 12 round decision against Martin Murray, but if this Martinez comes in fully fit and ready, I see a different kind of fight. Martinez will likely start slow as is his wont and allow Cotto to do some decent work from the outside including hooks to the body. However, once the Argentinian finds his rhythm and separation, he once again will become the Matador and begin throwing the heavy-handed pot shots that should tear up Cotto’s very vulnerable facial skin. At this point, Miguel will begin to back up and allow the more athletic Sergio to prepare for the kill, but unlike horrific and shameful Bull Fighting, Cotto will still have a chance in this one just as Chavez Jr. did. Still, once Sergio smells blood, he won’t make the same mistakes and will stop Cotto in the late rounds with his superior late power. An added factor: the disdain that these two fighters have for each other actually seems real for a change, especially Martinez’s.

Miguel Cotto is the best frontrunner in the game and if he smells weakness or feels he can make his opponent flinch, few are better at closing the show. However, Cotto, when he encounters problems and has been hurt, is keen on frantic flight over fight. The key for Martinez is to get Cotto’s respect very early on and prevent him from applying the kind of pressure that could force the wheels off of Martinez’s 39-year-old surgically-repaired cart late in the fight. My educated guess is that Martinez will land something big within the first three rounds which will end things early or, more likely, buy him the space and respect he needs to take a decisive unanimous decision.