Hola family and welcome to another tangy episode of the number one Sunday Brunch substitute, Boxing’s Mid-Week Meal Ticket – We are the physical manifestation of J.R.’s Pepper Power Slam BBQ Beef Jerky – in typographic format. We’re broadcasting live from deep inside of a Panamanian stone sarcophagus this week where we’re hitting on a few topics, including: Miguel Cotto’s historic victory from Madison Square Garden in New York City…Also, we will also be answering a few of your (definitely not fake) email questions regarding some of the stories swirling around boxing’s jagged landscape. So, without further ado, I gave you your instructions in the dressing room, what I say you must obey – Cuidate, escucha me, toca los manos y buena suerte…Let’s get it on! 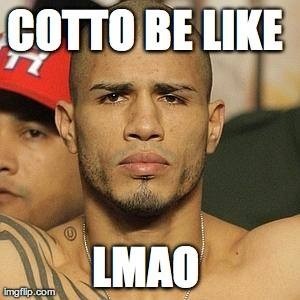 Illeism /ˈɪli.ɪzəm/ (from Latin ille meaning “he”) is the act of referring to oneself in the third person instead of first person.

First off, let me say that I was wrong.

I’d happily be the first to admit that my Martinez – Cotto prediction was way off. And if I hadn’t received so many emails from you wonderful Boxing fans reminding me how wrong I was, I’d be right there with the “YDKSAB” commenters.

Most people with an opinion declared that Martinez would be too smart and too elusive for the naturally smaller Cotto, However, the Caguas Crusher came out of the gates looking like an absolute middleweight destroying tank.

After dropping the former lineal middleweight kingpin three times in the opening round, Miguel Cotto showed everyone that at 33 years of age and with all the discombobulatingly disfiguring campaigns he’s endured – he can still shock the world.

Miguel Cotto earned the right to talk about himself in the third person.

Thanks for the email, UA. First, let me say that Maravilla Martinez had a hell of a run. Most fans got their first glimpse of Sergio Martinez around 2008 with his trouncing of Alex Bunema.

He would then go on to beat the snot out of the “Killer” Kermit Cintron, but was cheated out of a knockout win when the commission and referee apparently decided to continue the match after a ten count was issued…the Argentine then had to settle for a highly controversial draw.

From there Martinez would continue to ascend the proverbial pound-for-pound ladder, officially losing to Paul Williams in their first encounter, though most thought that Martinez was jobbed that night out of a clear victory. He would go on to win that rematch in emphatic, concussive fashion when he cracked Williams with a titanic left counter that put the giant Georgia native to sleep well before his face smashed into the canvas.

Martinez would have several career defining moments that earned him his stripes and a coveted place in the hearts and minds of fight fans, including his nabbing of the lineal middleweight crown from Kelly Pavlik.

But now, Martinez joins the once-elite ranks of fighters such as Roy Jones Junior, who relied so heavily on their extraordinary athletic ability that actual boxing fundamentals took a back seat during most of their reign. As always, once age and injury catch up to this kind of a fighter, they often don’t have anything significant to fall back on. If Martinez retired today I think he would have nothing else to prove and would have a spot waiting for him at the boxing hall of fame in five years.

Jesse, do you think Nonito Donaire is actually going to give Simpiwe Veteka a rematch? – Rasslin’ Provodnicough

No, Rasslin’, I do not think that Nonito has any intention of fulfilling his in-ring word to give Veteka a rematch. In a recent sponsored article Donaire expressed interest in facing “The Axe Man” instead. Nonito’s father, “Daddong” Donaire said that his son needed more sparring…apparently so he was able to fight for longer?

Nonito Donaire is quite good at talking loads of nonsense in between fights, especially to his eager personal reporters. Donaire would go on to claim that “…people haven’t seen my potential yet.” and that he’d love to keep going up in weight until he hits the junior welterweight limit of 140 (and that would be as easy task to achieve).

At 31 years-old, he had better step on it if he’s going to move up in weight comfortably and without excuses.

So, what’s up with Mayweather? Any idea on who he’s fighting next?? – Packie Mannyiao

According to rumors, Floyd Mayweather may chose to defend his 147 and 154 pound WBC titles in his next outing. Who he will choose to defend against is anyone’s guess this far out, though. Some say Danny Garcia will get the nod, others think that a rematch with Miguel Cotto is a sure fire bet.

I like both of those fights and while I do not see a rematch with Marcos Maidana in his immediate future, Mayweather will likely pick the fight that makes the most sense economically.

He is supposedly in some upcoming movie with a bunch of actors I’ve never heard of and got his own action figure. Don’t write to me again…

Do you think that the Golden Boy/Top Rank cold war will be over soon? – Boscar De La Goya

Anything’s possible, Boscar, but I will believe it when I see it.

Thanks for the love, Bimmy…

Here’s a few tips to close out this week’s nonsense:

Microwave a whole ear of corn and watch it slip totally out of the husk!

When adding tomato paste into a recipe you can get rid of the sharp tang it has by cooking it in a dry pan before mixing it into other liquids such as pulverized tomatoes for sauce or into a curry.

Add a 1/4 teaspoon of baking soda per pound of onions next time you’re caramelizing them for soup or for onion dip…it’ll cut your time in half!

Mix together lemon grass (the white part), garlic, ginger, shallots and green onions in the blender for a great Asian marinade. Add coconut milk to it instead and cook it over low heat for a nice braising liquid…if using for this purpose add the coconut milk in towards the end. Use this same technique but add yellow curry powder to a dry pan to briefly toast, then the blended aromatics and finally coconut milk and a touch of honey for a wonderful tasting curry base.

Plantains are an excellent substitute for potatoes in a fried application. For this you need the green plantains, some unsalted butter and oil mixed for frying. As the 1/4″ sliced plantains cook in the fat, press down so there is no raw spot in the center. Season with sea salt immediately when done.

For Cuban style plantains, use the yellowish brown plantains and let them caramelize in butter. Once they have a nice golden brown color and are softish, add a quarter cup of both sugar and water and turn the heat up until a nice slow bubbling begins. Reduce most of the cooking liquid until around a tablespoon is left and your plantains will be wonderful. Add in a pinch of cinnamon and lemon juice if you’d like, both ways taste great.

If you have stale nacho chips, spread them out on a sheet pan and cook them at 350F for 10 minutes and your shitty, stale chips will be better than when you bought them!

If you’re cooking any kind of desert and you’re planning on using that 10 month old bottle of artificial vanilla extract in your recipe, stop where you are and throw it in the garbage. Spend a few extra bucks in a couple of real vanilla pods, open them and using the back of your knife scrape the seeds out. Put both the seeds and the pod into some simmering heavy cream or scalded milk to infuse. Your desert game will improve by 700%.

Thanks for joining us again this week, we’ll be back next time talking about quantum mechanics, nanotechnology and biometric vein scanners. Thanks for all your fake emails, keep em’ coming at JESSEBOXINGTRIBUNE@GMAIL.COM or pretend we’re friends on Twitter @JESSEBOXING … Until next time, sante!