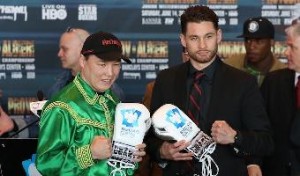 Brooklyn, New York- A sparse yet enthusiastic crowd at the Barclays Center witnessed an upset of epic proportions as a game Chris Algieri survived two knockdowns and a relentless attack by champion Ruslan Provodnikov and was awarded a majority decision victory. The nights co-feature saw Demetrius Andrade successfully defend his version of the 154-pound title against an overmatched Brian Rose; whose corner stopped the fight in the seventh.

There’s no doubt who the crowd came to see as they chanted “Algieri, Algieri” up until and after he was knocked down for the first time in round one. After he was dropped for a second time you began to hear a spatter of “Ruslan” chants in what was supposed to be a pro-Russian crowd but didn’t end up as such. The first knockdown was the result of a left hook, the second was a left cross. Algieri showed his heart in round two and boxed beautifully but couldn’t keep Provodnikov honest, even when he landed clean shots the Russian just kept coming. In both the third and fourth, when Algieri moved he had success, but every time he stopped the champ made him pay and the effects showed as his eye began to close. In the fifth Algieri had success with his jab and cross, and seemed to be steady on his feet, until the closing seconds of the round when Provodnikov landed a huge left hook that busted Algieri’s nose and sent him stumbling back to his corner. After a dull sixth, the seventh saw Provodnikov land a couple of left hooks that excited the crowd and stunned his brave opponent. At the start of the eighth Algieri appeared to knock the champ down but it was quickly ruled a slip. By the ninth, Algieri’s left eye was completely shut and Provodnikov who isn’t usually known for having a good jab began to use his to target his opponents damaged face. Algieri used his jab and lateral movement to make a good account for himself in the tenth. The champ came out charged to start the eleventh and went for the kill but Algieri, whose face was a mess at this point, landed a stiff jab and used his legs to get himself out of danger. At the start of the twelfth, the crowd showed its appreciation for the courage showed by Algieri by chanting “USA, USA”. Up until the final bell Provodnikov pressed and Algieri danced, a testament to the both fighters supreme conditioning. After the fight you knew something was up after a long deliberation and the tone of Michael Buffers intro to the card reading showed that something was indead up. One judge scored the fight 117-109 Provodnikov and two had it 114-112 for the new champion Chris Algieri.

Andrade landed a stiff jab in round one and followed it up with a straight left that dropped Rose in the first, then continued to pummel Rose until the bell sounded. The jab, straight left combo was the theme in the second as well, as Andrade picked Rose apart from a crouching position, which allowed him to paw the jab then launch his left in an upwards motion. Rose walked into a counter right in the third that sent him to the mat for a second time. The third proved to everyone watching that this was nothing more than a glorified sparring session and in the fourth Andrade reverted back to his coasting ways of admiring his work rather than trying to finish his overmatched opponent. Finally in the seventh round, Andrade gave the people what they came for and finished Rose with a barrage of power shots that left Rose defenseless and caused his corner to wave it off at 1:19 in the round seven.