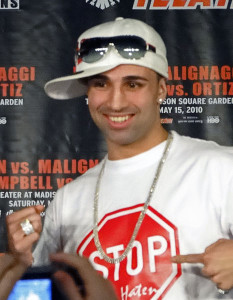 Yesterday, The Boxing Tribune ran into former two time world champion Paulie “The Magic Man” Malignaggi at the Ruslan Provodnikov-Chris Aligeri weigh-in, and he provided us with some interesting insight into Saturday night’s main event, as well as last week’s Miguel Cotto-Sergio Martinez bout. In his last fight, Malignaggi was stopped by current welterweight title holder Shawn Porter, and after suffering a concussion in the match, he has a decision to make about the future of his boxing career.

Here’s what he said;

You’re a big soccer fan and an American fighter who has deep roots in Italy, so who are you rooting for in the World Cup?

I root for the U.S. when they play but Italy is my team. My entire family are Italian immigrants and it’s a really big deal, when the World Cup comes around we watch all of the Italy games and go crazy.

You fought Miguel Cotto when he was in his prime and went the distance with him. From what you saw last week, do you believe that was a vintage Cotto performance or did he stop a faded Sergio Martinez?

I thought Cotto looked very good. I think it was a mixture of both but you can’t discredit Miguel, he and Freddy had a great game plan. Freddy has brought out the right mentality in Miguel, he’s always had the correct fundamentals but sometimes he’s been more defensive. Cotto’s best when he’s an offensive juggernaut and Freddy specializes in that. So I think Miguel and Freddy being together is a wonderful combination and it showed in the results; maybe Sergio wasn’t the same, but it was a very good Miguel Cotto that we saw.

Being that you work for Showtime, how do you think the situation with Golden Boy and the departure of its CEO Richard Schaefer will affect the network?

I have no idea, but I hope good things happen and it doesn’t affect boxing in a negative way. It’s a shame when things like that have to happen, you hope things can be handled in a good manner even when people split up. I just hope that the fighters don’t have to suffer, because at the end of the day what’s important is making sure that the fighters are taken care of.

What’s your prediction for the Ruslan Provodnikov-Chris Algieri fight?

It’s a tough call because I know a lot of people are picking Ruslan, but I know Chris and he’s a very diligent worker who has some underrated boxing skills. In ways this fight reminds me of my fight with Cotto in 2006, when I was that ESPN “Friday Night Fights” hot shot with some decent wins but nothing major. I came up and fought that offensive juggernaut and no one was giving me a shot; Chris is pretty much in that same boat. But it’s up to him to not get swallowed up by the moment, because if Chris fights his fight, then this becomes a real good fight. So I don’t think an upset is out of the question, even though you have to favor Ruslan because of his punching power.

Have we seen the last of Paulie Malignaggi inside of a boxing ring?

Never say never. I definitely haven’t made up my mind yet, I’m waiting to heal up 100 percent first and then decide. Right now we’re not 100 percent yet, so if we reach that level where I’m not suffering any post-concussion symptoms or anything like that then I’ll give it some thought. But I can’t give it any thought until I’m 100 percent first and even if I am, I still may not [fight], so we’ll see.