Tomorrow night at the CenturyLink Center in Omaha, Nebraska, WBO lightweight champion Terence “Bud” Crawford (23-0, 16 KO’s) makes the first defense of his crown against former world featherweight title holder, Yuriorkis Gamboa (23-0, 16 KO’s) in the nights scheduled 12 round main event. The contest will be aired by HBO and Box Nation.

In Omaha’s first world title contest in 42 years, this will be quite the homecoming for Crawford, who will be fighting in his hometown for the first time since a National Golden Gloves loss in 2006 at the same venue. Just four months ago the Omaha native fought then champion Ricky Burns in Scotland, taking a 12 round unanimous decision to win the title; quite 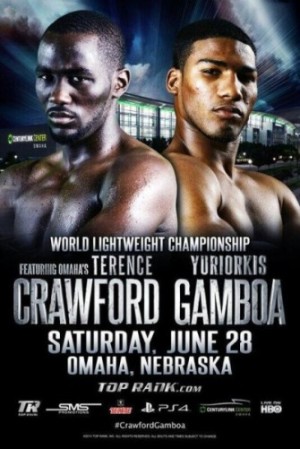 the accomplishment considering Burns had benefited from questionable judging in his prior fights. “I have a sense of what the magnitude of this fight is. This is not just for me, but to the entire city of Omaha, Nebraska,” Crawford told The Ring.

Holding the title for barely four months, Crawford has already expressed interest in moving up to the 140 pound division. The difficulty of making weight along with the potential for bigger fights being the lure to junior welterweight, this may be his only defense of this title. Despite his future plans, he has his work cut out for him against Gamboa, the hard hitting Cuban who’s looking to return to the top of the lightweight mountain.

A 2004 Olympic gold medalist, Gamboa hit the pro scene hard in 2007. Within two years and 15 fights, he was a world champion, winning the interim WBA featherweight title and winning the full championship one bout later. He would be elevated to WBA “super” world champ and add the IBF strap to his accolades when he defeated Orlando Salido in 2010. He seemed destined to cross paths with fellow featherweight title holder Juanma Lopez, but when Lopez was stopped by Orlando Salido that fight pretty much fell by the wayside. Recent promotional issues have brought his career to a crawl, and the former champ has only fought twice since 2011, though he did win the interim WBA lightweight title in his last contest over a year ago. The title has since been vacated while Gamboa has remained idle: out of sight, out of mind.

As cliché as it may sound, this is a match-up of opposing styles against two physically different fighters. Crawford holds the edge in height, reach, and is the naturally bigger fighter. He’s a well-rounded boxer with a stiff jab, good head movement and tight defense. In contrast, Gamboa is an aggressive power puncher, a guy that can end a fight with one shot, though his porous defensive abilities have seen him visit the canvas more times than one would expect from a world class fighter. He’s faced a higher level of opposition that Crawford and with equal knockout tallies between the two, it has to be taken into account that the champions stoppage wins have come against a lower level of opposition while Gamboa’s have all come in a lower weight class.

Coming in off a huge win, the momentum will be in Crawford’s favor. How the fight plays out will be determined though on how well he can control the pace of the fight and establish a safe distance, keeping the on-rushing challenger at a comfortable range. With just two fights since 2011, ring rust could also be a factor for Gamboa; defense and timing will be critical for him to get in close and get off the damaging shots he’ll need to break down the champion. This is a contest that could turn out to be highly entertaining, or just another dull 12 rounder.