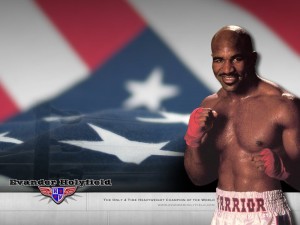 Evander Holyfield finally gave in to the inevitable march of time this week, and officially announced his retirement from the sport and the end of a glorious, drama filled, boxing career that stretches back thirty years, to 1984. At three months short of 52 years of age, Holyfield’s retirement is perhaps one bourn of necessity, rather than desire. His last fight was back in 2011, when he out-lasted fellow veteran Brian Nielsen. Since then, there had been rumours and talk of further fights, big fights even, but nothing came to fruition. In the end, the offers had simply dried up, along with the boxing public’s appetite to see Holyfield continue to ply his trade into his 50s.

Recent years have not been kind to Evander, and his financial problems are well documented. The long good bye, which the last years of his career became, unfortunately, leaves a bittersweet taste in the mouth. Despite all of his extraordinary achievements in the ring, Evander Holyfield has fallen into the same traps that all too many other greats of the past also stepped. ’The Real Deal’ as Holyfield called himself, and indeed proved himself to be many times over, deserved a better ending to his long career, than the slow fade out which it became. However, like so many great fighters before him, Evander Holyfield was reluctant to leave the arena that he made his own personal theatre for the best part of three decades. At the same time, it could have been much worse. When the final curtain came upon Holyfield’s career, (presuming that this truly is the end and that nobody is foolish enough to tempt Evander back into the competitive ring sometime in the future) it was not prompted by one final defeat too many, and with the once great warrior being humiliated in the ring. Holyfield actually exits boxing a winner, after winning six of his last nine contests, including his last fight against Nielson.

Yet, there is no avoiding the fact that Holyfield retired about 14 years too late. The almost unnerving mix of courage and stubbornness that made him carry on fighting, long after most of those around him wanted him to hang them up, are the same attributes that allowed him to defy the odds in so many fights during his career, and come back from almost certain defeat to snatch victory in his most famous ring moments.

There are those who wrote Holyfield off as far back as his first encounter with Riddick Bowe in 1992, when he lost his World heavyweight title to Bowe following a fight that was so thrilling and violent, that it immediately drew comparisons with the Ali vs. Frazier classics of the 1970s.

Those who foolishly questioned whether it was the end for ’The Real Deal’ saw Holyfield produce one of the greatest displays of his career when he defeated Bowe in their rematch, and regained the world title, after a fight that was an even more dramatic battle than their first match. Then, there was the upset defeat to Michael Moorer in 1994, when Holyfield lost his championship once more, and followed two fights later by a knockout defeat to Riddick Bowe, in what was their third and final bout.

Now, the whispers became a crescendo, and when Holyfield signed to fight Mike

Tyson in late 1996, most of the talk wasn’t about who would win, but how badly a

faded Holyfield was to be injured by a still frightening ’Iron’ Mike Tyson.

Evander was never more ‘The Real Deal,’ than when he twice encountered ‘Iron Mike’; out-boxing, out-fighting, and finally stopping Tyson in their first fight. In the much awaited rematch, Holyfield then out-bullied the one-time ‘baddest man’ on the planet to such a degree, that Tyson fouled himself out of the fight with his now infamous bites upon Holyfield’s ears.

It would have been so much better had Evander retired following his victories over Mike Tyson, but few great champions retire when they should, especially after the biggest wins of their career. Instead, Holyfield carried on, but his career was pretty much a long slide down hill after his defeats of ’Iron Mike’.

There was an impressive revenge win over Michael Moorer, then a more workman-like victory over Vaughn Bean. However, when Holyfield faced Lennox Lewis in early 1999, he looked all of his 36 years, and was lucky to escape with a controversial draw. In their rematch eight months later, Holyfield was out-pointed, and despite giving his usual spirited performance, it was clear that Holyfield was no longer able to produce the speed and workrate that had been at the base of his greatest successes. The spirit was willing, but the flesh was growing weaker.

After the Lewis fights, there came the three bouts with John Ruiz, with Evander scoring a point’s win, followed by a loss, and then a draw. These three fights, which spanned late 2000 to late 2001, revealed that at the age of 39 years old, Holyfield no longer had the tools to overcome a fighter whose fistic talent laid mostly in his awkwardness. The Ruiz fights are one trilogy that boxing fans do not choose to re-watch willingly.

Holyfield followed the Ruiz fights with a controversial 8 rounds technical draw against Hasim Rachman on June 1, 2002. Evander then suffered three consecutive defeats that effectively ended his career as an elite fighter. Losing to Chris Byrd, James Toney, and Larry Donald. The defeats to Byrd and Donald were both via points, but the loss to Toney came via a punishing 9th round stoppage.

Following the loss to Donald on November 13, 2004, Holyfield had his license revoked by the New York State boxing commission. For most, that would have been the end of the road but, Holyfield refused to be told when to retire and carried on, claiming that his run of defeats were due to chronic shoulder injuries, rather than simple old age.

Holyfield returned to the ring in 2006, after almost two years out, and over the next five years, despite being effectively banished from the major venues in America, and restricted to fighting in either Texas or Europe, ‘The Real Deal’ would take part in nine fights, of which he would win six, lose two, and have one no contest. The two defeats were both on points, while fighting for fringe portions of the World heavyweight championship. On October 13, 2007, Holyfield travelled to Moscow Russia, to be out-pointed by Sultan Ibragimov, for the WBO portion of the world heavyweight championship, as Ibragimov proved to be just too young and quick for the slower Holyfield.

Fourteen months later, ‘The Real Deal’ was controversially out-pointed by the giant Nikolay Valuev when challenging for the WBA world heavyweight title, with many believing that at 46 years of age Holyfield had done enough to outpoint the seven foot two inch giant, Valuev. It was to be Evander’s last chance of regaining a world title. Although he lost these fights, Holyfield could still point to them both as proof that he could still compete with world-class opposition in his late 40s. Happily, Holyfield’s often spoken desire to face one or both of the Klitschko brothers for their portions of the heavyweight crown never became reality.

With hindsight, it is a huge accomplishment for Holyfield that he was able to stay at the top of the heavyweight tree for as long as he did. He was considered a ’small’ heavyweight, who often had to give away weight to his opponents. Holyfield’s high energy, all-action style, doesn’t usually lend itself to long careers, but Evander was able to prolong his career with a rare mixture of heart, stubbornness, and a dedication that never seemed to leave him.

Holyfield’s heart and incredible fitness would always remain intact right up to the end; never would Evander enter the ring flabby or overweight like so many fighters tend to do in the final years of their careers.

This dedication, and his underrated ring intelligence, is what allowed Evander to stay competitive at the highest level until his mid-40s. Few champions can boast the amount of classic ring wars to compare to the resume of Evander Holyfield. From his first world title winning triumph, at Cruiserweight, against Dwight Muhammad Qawi in 1986, then his exciting rise to the heavyweight crown, with classic fights against Mike Dokes and Alex Stewart, and his multiple reigns as heavyweight champion of the world. Holyfield proved himself ’The Real Deal’ in thrilling encounters with the likes of George Foreman, Larry Holmes, Bert Cooper, Riddick Bowe, and Mike Tyson, amongst many others.

Holyfields’s latest plans include him becoming an advisor and ambassador for ‘Dynasty Boxing’ promotions (headed by Dino Duva and Tommy and Terry Lane, the sons of famous referee Mills Lane). One of the first boxers whom Holyfield will impart his advise to, will be Zhang Zhilei, the six foot six, 255 pounds Chinese heavyweight, who gained Olympic silver at the 2008 Olympic games. Zhang makes his professional debut in August, and if he can absorb just 10% of the knowledge and experience which ’The Real Deal’ has collected over the course of his 30 year career, it would be invaluable. Hopefully, Holyfield can now contribute to the fighters of the future.

Perhaps nature never intended Holyfield to be a heavyweight, but he always had a heavyweight heart in the ring. While Evander Holyfield may not go down in boxing history as the greatest heavyweight champion of all time regarding ability, he was most certainly one of the most exciting. He was a throwback to the ring warriors of the past who would fight anyone, anywhere, and never shy away from going toe-to-toe when the opportunity presented itself. If ever a fighter deserved to call himself ’The Real Deal’ that man is Evander Holyfieild. One of the last true warriors of the ring and we will not see too many more fighters like him.