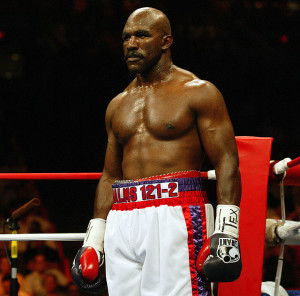 Last week was a busy one for former heavyweight champion Evander Holyfield. He signed on to be an advisor to Dynasty Boxing’s Zhang Zhilei, he officially announced his retirement as a fighter and Saturday was the 17th anniversary of his infamous “Bite Fight” with Mike Tyson.

Holyfield’s fought everyone from George Foreman to Lennox Lewis, and his trilogy with Riddick Bowe rates as one of the best ever. But when you hear his name or look at his right ear, you can’t help but think of his second bout with “Iron Mike”, which ended after a frustrated Tyson bit Holyfield’s ear—ripping part of it off—before being disqualified.

While Tyson added to his ferocious persona, Holyfield forgave and moved on. A deeply religious man—who wore biblical verses on his trunks—it was his faith that got him through the fight’s aftermath and allowed him to forgive Tyson.

“I am who I am because of Christ, so I don’t try and hold somebody else back by not forgiving them,” Holyfield said. “Because I know that if I don’t forgive them, I won’t be forgiven. That allows me to overcome anything, and the people that are able to overcome situations are the ones who will be successful.”

He may be the most famous bite victim in sports, but the most recent incident happened last week in the World Cup, when Uruguay’s Luis Suarez bit Italy’s Giorgio Chiellini. It was the third time Suarez bit an opponent and Holyfield believes it could’ve been prevented by harsher past penalties.

“Here’s a guy who got frustrated and reacted the way he had before,” said the 51-year-old. “He had bitten people before, but because the punishment wasn’t serious enough he decided to do it again, which is usually why people keep doing the same thing over and over.”

FIFA has since banned Suarez from any soccer activity for four months, a penalty which doesn’t seem to impress Holyfield.

Although negative, the Suarez attack drew global attention to soccer, the same way the “Bite Fight” did for boxing. Yet, Holyfield doesn’t see any good that can come from that kind of press.

“I definitely think it’s bad because that means a couple of more people have to get bit and there’s nothing good about that,” said Holyfield. “Nothing’s good about bad anyway. The way that you handle it can ease things up but bad is bad.”

What’s been bad in recent memory has been American heavyweights. But there’s one fighter out there who Holyfield thinks will become a champion, the undefeated knockout artist Deontay Wilder. Holyfield is impressed by Wilder’s power and doesn’t buy into what many critics believe is a padded record.

“I like Deontay, I think he’s going to be the next American heavyweight champion,” said Holyfield. “It [Deontay’s record] is no different than anyone else’s, who did they beat? I say if the whole pool is weak than who cares. There’s always somebody holding the championship belt for somebody else to take it, that’s how you have to look at the game of boxing.”

At just six feet tall and about 220 pounds, Holyfield was small compared to today’s heavyweights, Zhilei, Wilder and Wladimir Klitschko. Because of their size, this era’s big men have become robotic, throwing one punch at a time instead of the high volume combinations once enjoyed out of Muhammad Ali, Mike Tyson and Holyfield himself.

But now that he’s mentoring the six foot six Zhilei, instead of teaching him how to fight like he did, the emphasis will be on using his size as an advantage and his power to please the crowd.

“As a large man he doesn’t have to throw those combinations, but he has to be dominant,” said Holyfield. “Look at Lennox Lewis who was one of the most boring heavyweights ever until his last four fights. He ended up as a good fighter but isn’t considered a great because he had a career where he wasn’t as aggressive as he should’ve been. You got to have some pop. If you’re a big man you fight like a big man. You got the power to knock him out, you have to use your power.”

Another active boxer Holyfield admires is Floyd Mayweather Jr. And although he doesn’t always agree with his behavior, he understands that everyone is different.

“I like Mayweather. Everyone has their own persona that works for them, he makes more money than any fighter has ever made, so whatever you want to say about him he makes the money,” said Holyfield. “Particularly there’s a lot of antics that I don’t like, but there’s nothing that anyone’s going to do that everyone’s going to like.”

When it comes to a potential Floyd Mayweather-Manny Pacquiao bout, Holyfield believes it will eventually happen and the reason it hasn’t already is because there’s doubt in Mayweather’s mind.

“I think they’re going to fight eventually,” said Holyfield. “This is just like the Tyson-Holyfield fight. It looks like Floyd may beat him but I’m not for sure. Everyone said “Tyson would kill Holyfield, but Tyson didn’t believe it. Just like people say why don’t he go on and fight Pacquiao, he would kill Pacquiao, but he don’t believe it. That’s why he won’t fight him, because when people believe something they do it.”

There’s another Holyfield we should be on the lookout for, his son Evan, who’s an amateur boxer and is growing faster than his heavyweight dad was at his age.

An Olympic Bronze medalist himself, Holyfield expects his son to make his own run at the games and is in no rush for him to fight professionally.

“I think he’ll be close to the one [Olympics] that comes in two years,” said Holyfield. “He’ll be on the low end of it because the maturity won’t be there, but I think in six years, no doubt. But you got a lot of people that think they know more who don’t fight, and they want to throw him in there [professional], but I would like to see things done right.”

Wise words from a man who more times than not has represented everything that’s right in the sport of boxing.