Golden Boy Promotions never had a perfect track record while under the watchful eye of former CEO Richard Schaefer. But since taking over the airwaves at Showtime, Golden Boy has, more often than not, put on quality fight cards. Many of those cards featured Al Haymon clients, who may or may not have been under contract to Golden Boy, according to a lawsuit recently brought about by Main Events Promotions. It is that lawsuit that is said to have led to the ousting of Schaefer and the return of Oscar De La Hoya to full-time duty. 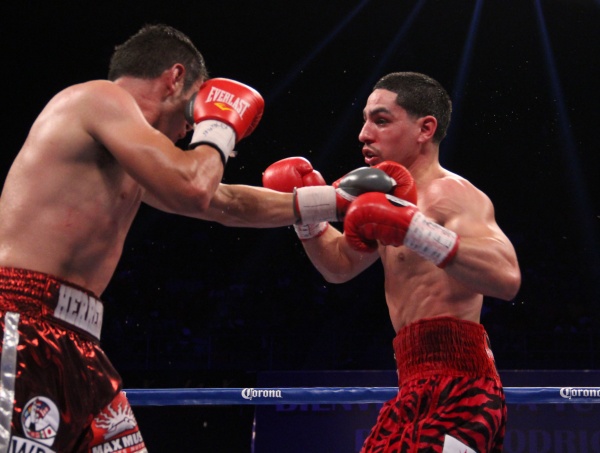 The first confirmed Schaefer-less Golden Boy card is on the books (and my inbox has been inundated by positive spin), and with three stinkers highlighting a Saturday night in August, the Schaefer-less era is off to a bumbling start.

Danny Garcia, the 26-year-old rising star from Philadelphia has seen his star’s rise fall a bit since an impressive two-year run that featured wins over Erik Morales (twice), Amir Khan (TKO4), Zab Judah, and the fearsome Lucas Matthysse on the undercard of the second largest Pay-Per-View of all time. Garcia, of Puerto Rican descent but born and raised in Philadelphia, Pennsylvania, was sent “home” to Puerto Rico to take on Mauricio Herrera back in March. Garcia was subjected to intense criticism and ridicule for his part in the farcical “homecoming” aspect of the promotion coupled with his inability to answer basic interview questions in Spanish. His lackluster performance against Herrera only helped to fuel the fires of criticism.

The nigh-anonymous nature of his August 9, 2014 opponent, Rod Salka, won’t do anything to help his cause.

Golden Boy, who seems to have done a good job in taking Canelo Alvarez from Mexican-Ginger attraction with a lot of upside and turned him into a bona fide star with the potential to make many millions over his career, is in danger of setting Garcia way back on his path to stardom. After Garcia dominated Lucas Matthysse in such impressive fashion and such a huge stage, Golden Boy dropped the ball in trying to shoe-horn him into the Puerto Rican market; a market so desperate for a torch bearer (once Miguel Cotto finally hangs up the gloves), putting him in with a tough-as-nails style mismatch in Mauricio Herrera. And while many will argue that Garcia is due a soft touch after facing an extremely tough level of opposition in 2012 and 2013, Rod Salka is beyond Charmin soft for someone on Garcia’s level.

And congratulations should go out to the World Boxing Association (WBA) for reminding us again why they’re quite possibly the biggest joke of the Big Three alphabet soup organizations. The first of the three August 9 Showtime Championship Boxing bouts (headlined by the aforementioned Danny Garcia) will pit Daniel Jacobs against Jarrod Fletcher for the vacant WBA middleweight title. Jacobs’ back story is feature film-worthy, but his resume since his return from cancer in his spinal column is hardly world championship-worthy.

“But wait, isn’t Gennady Golovkin the WBA champ?” you might have just asked. Yes, he is. Golovkin has been the champ since 2010, and was recently elevated to “Super” Champion, based on his multiple successful defenses. The WBA, however, stated its desire to have up to three World Champions in each division, lineage be damned. The “Super” Champion, is like the gold medal winner, while the “Regular”, or “World” titlist and the “Interim” titlist are the silver and bronze medalists, respectively. That’s a pretty neat little idea, on the surface, but BS spin aside, it is merely an opportunity for the WBA to syphon sanctioning fees from up to three World Champions at the same time.

Just this weekend, the WBA watered down its heavyweight title yet again, when former world champion Ruslan Chagaev turned back Fres Oquendo to win the “World” WBA heavyweight title, while “Interim” titlist Luis Ortiz sat on the sidelines. Five more divisions, including super middleweight, junior welterweight, featherweight, junior featherweight, and flyweight all have three World Champions. And while it is sometimes easy for the hardcore fan to identify the true champion in each divisions, it is shady shenanigans such as these that keeps casual fans at bay.