This is a tough one for me to call…On one hand, Saul Alvarez has problems dealing with superior boxers, but on the other, Erislandy Lara has a tendency to wilt slightly under constant pressure. If I had to pick (and I do) I’d say that the Mexican wins rounds 1-4, while Lara looks fantastic in taking 5-9. Down the stretch they trade a few frames in a back and forth fight…Conventional wisdom says that the cash cow gets the decision, but the walk over Canelo had in his last match was hardly preparation for the hunger and experience Erislandy Lara will bring. Official prediction: Lara by SD 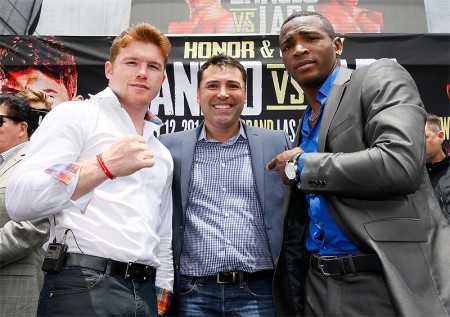 I think this one will come down to which fighter will be first to establish the pace of the fight. We’ve seen how Canelo reacts when he faced with a master technician; Lara’s not Mayweather, but he is the better boxer of the two and if he can discourage Alvarez early, he can run away with the fight. Lara on the other hand was dropped twice by Alfredo Angulo, and was barely winning the contest when he scored a 10th round stoppage. Angulo in turn, was beaten fairly easily by Alvarez, so you can see how this one can go either way. I’ve always felt that given two fighters of close equal skill, the better boxer will usually win so long as his chin holds up, and this is why I’m picking Lara. He held up against Angulo, and I think he’ll hold up here against Canelo’s aggression. Given some scary moments and maybe even a trip or two to the canvas, Lara takes a close split decision.

Canelo-Lara is the epitome of a 50-50 fight. Lara has the edge in amateur experience but Canelo’s fought some highly skilled pros like Floyd Mayweather, Shane Mosley and Austin Trout. They both had the same results against their only common opponents, stopping Alfredo Angulo in round 10 and scoring unanimous decision victories over Austin Trout. So what I’ll look at are the intangibles. Canelo will have the crowd on his side as well as what I anticipate will be a small ring, to help negate Lara’s movement. I’ve seen Lara knocked down twice against Angulo and put up a stinker against Vanes Martirosyan. If Canelo can pressure Lara the way he did against Angulo, but this time for 12 rounds, he’ll pull out the decision. Canelo wins via unanimous decision.

Canelo should have a tough go in the early rounds. Lara will move and make Canelo work for his supper – but Canelo will be landing enough lefts to the body that Lara will start to slow down after a few rounds. Once Lara starts to tire, Canelo should push the pace and let his hands go when Lara stands and trades, as Canelo’s power will win those exchanges. Lara was winning by the hair of his chinny chin chin when Angulo began to fade and had his eye explode; Lara won’t have such a luxury in this fight. Canelo stops Lara late.