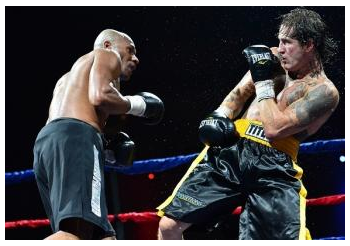 In March 2003, he KOd Jesse Magana in Huntington Park, California to win the IBA featherweight title and then engaged in a NC against Argentinian Carlos Alberto Ramon Rios (48-4-2) before stopping (and retiring) Raul “Jbaro” Perez (61-5-3) in Las Vegas in 2000. He also stopped and ruined Columbian Evan Belano (37-2) at the Great Western Forum in 1997. Many of his former opponents have since retired. Last year, the active 39 year-old Velazquez fought five times and remains competitive in a career that began in 1993.

Hector is always willing to fight in his opponent’s backyard so it was no surprise when he signed up to fight crafty Paul Spadafora (48-1-1 at the time) at the Rivers Casino in Pittsburgh in a Roy Jones Jr.’s TNT Promotions show on July 11. The “Pittsburgh Kid” was coming off his first career defeat, an MD, to the very talented Venezuelan Johan “El Terrible” Perez (19-1-1). Perez will now have his hands full as he goes up against Mauricio Herrera for the interim WBA World light welterweight title on the Lara-Canelo undercard.

I always go deep in fights with guys younger than me…“It will be a good fight.” –Hector Velazquez

“This is it,”“I’m in a position where I have to win.” –Paul Spadafora

The dirty tactics took their toll in the sixth, when Spadafora spun Velazquez around and into the ropes, then threw a punch into his lower back. It isn’t the first time that Spadafora, no stranger to street fights, channeled Fritzie Zivic. –Pittsburgh News

Spadafora relied less upon his slick defense and more on his ability to counter allowing Velazquez to initiate the action. Spadafora caught him with a right hook to the head in the third, then a straight left that opened a cut above Velazquez’s right eye and the subsequent bleeding hampered Hector from that point on.

The “Kid” dominated and won a convincing 8-round decision by scores of 79-73, 79-73, and 80-72 moving his record to an astounding 49-1-1. Spaddy’s long and incredible undefeated streak is over, but so is the related pressure. Now, he can go after that big payday with laser-like focus.

In a career marked and interrupted by extremely serious troubles outside of the ring, Paul continues his remarkable rebound from rock bottom. In fact, to even think that he is still viable in 2014 is mindboggling given the nature of his troubles.

As Chico Harlan wrote in 2005, “At the height of his fighting career, Spadafora spawned a circus: He employed trainers and managers and promoters; he allowed street friends to tag along for the ride; he met women — lots of women; then, T-shirt salesmen hopped on board, and sat right next to corporate sponsors and nutritionists and physicians and anybody else looking for the ride of a lifetime. Finally, when the crowd assembled, Spadafora’s career became a living, breathing, disastrous enterprise.” Pittsburgh Post gazette February 27, 2005,:  http://old.post-gazette.com/pg/05058/463277.stm#ixzz37IVO3ZDL

But that was then and this is now—and now he has worked his way back from the brink and is on a final title run.