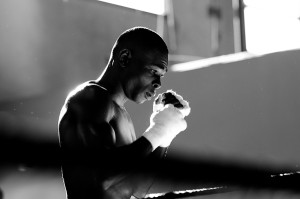 Boxing is looked upon by many as a bloody and brutal endeavour, in which the object of both fighters is to inflict physical damage upon the other fighter. This is, of course, is a huge over simplification of the sport that is as much about the mental and spiritual side of the fighters, as it is about their physical attributes. At its best, boxing is a duel between two combatants on every possible level, the type of which cannot be found in any other sport. This is one of the reasons why boxing has been called ’The Sweet Science’. There are times when boxing can be almost ballet-like, with both offense and defense coming together in a seamless flow. Unfortunately, boxing’s defensive artists are often the sports unsung heroes. Everybody likes the sluggers, and the knockout artists, but the boxers who give as much thought and ability top defence as they do to offence, are often a more acquired taste. In today’s boxing, the defensive masters are a dying breed. Along with Floyd Mayweather and Bernard Hopkins, Guillermo Rigondeaux (13-0, 8 koes) is one of the few pure defensive geniuses in boxing today.

The Cuban is a smooth boxing technician, whose defensive skills are so profound, that he can go through whole fights against top competition, and hardly are hit with a clean punch. The only boxer, who is comparable to Rigondeaux, in terms of overall boxing skill and technique, is Floyd Mayweather. Like Mayweather, Rigondeaux is a master of the art of self-defence, but he also has a knockout punch in each hand. In many ways, there lies one of Rigondeaux’s main problems, faced with his overwhelming skill and his formidable punch, many of Rigondeaux’s opponents choose to retreat into their shells and wait until it is all over. Rigondeaux is that rare thing in boxing, with the ironic gift of being too good for his own good.

Following an amazing amateur career, in which he won Olympic Gold at Bantamweight, at the 2000 and 2004 Olympic games, in addition to winning the National championship of Cuba seven times, Rigondeaux defected to America in 2009, with dreams of being able to test his skills against the best professionals in the world, and achieve the kind of wealth and glory that would be forever denied him in the Cuban regime. However, the American dream hasn’t worked out quite the way it was supposed to for Rigondeaux. It all started so well for ’El Chacal.’ In just his ninth professional fight, he knocked out Rico Ramos with a body shot, on January 20, 2012, to win the WBA world super-bantamweight championship. Fifteen months later, on April 14, 2013, after two successful defences of his title, Rigondeaux was matched with WBO world champion Nonito Donaire, in a big unification fight.

Donaire went into his showdown with Rigondeaux unbeaten in his last 29 fights (going back to his second professional fight in 2002) and regarded as pound-for-pound, one of the best boxers in the world. Although entering the match a clear underdog, Rigondeaux rose to the occasion and produced a sublime exhibition of boxing, to not only outpoint Donaire, but dominate and ’school’ him. Indeed, at times, Donaire looked like a novice against the fast and silky skills of the exiled Cuban, it was a masterful performance by Rigondeaux, and should have established him as an elite star and attraction.

What should have been Rigo’s greatest night, and his pathway to stardom, turned into a bittersweet experience when his own promoter, Bob Arum, turned on him post-fight, and criticised his performance as dull and boring. The problem was that Rigondeaux was not supposed to beat one of Bob Arum’s and Top Rank’s biggest cash cows, Nonito Donaire, and he was most certainly not supposed to have out-classed Donaire and make him look like a hurt and befuddled novice at times.

With one of his biggest cash cows beaten and humiliated, Bob Arum responded by attacking the credentials and reputation of Rigondeaux. ‘The Jackal’ was now too boring, and a hard sell, according to Arum. Apparently, it was Rigondeaux’s fault that after being hurt in the first round of their showdown, that the usually extremely offensive-minded Donaire chose to fight a rear guard action against Rigondeaux.

Fairly quickly, Rigondeaux’s network, HBO, had been dragged into the act as well, with Arum gleefully describing how the very mention of Rigondeau’s name provokes HBO executives to ‘vomit.’

In the ensuing, fifteen months since he defeated Donaire, Rigondeaux has fought just once(a one sided points decision over Joseph Agbeko, last December) all the while, being over shadowed by the bitterness and negativity aimed at him constantly by his own promoter and network.

The career of Floyd Mayweather Jr. has shown how high a defensively brilliant boxer can climb when he is promoted correctly. While Rigondeaux doesn’t have the out of the ring persona or American back story that Mayweather Jr. has, his ability and achievements still deserve much better treatment than what they are getting at the present time from Bob Arum and HBO. One wonders where Mayweather Jr.’s career would have gone had he stayed with Arum ,rather than opting to break away from him some years ago. He almost certainly would not be the global star in the same way that he is today. It is not hard to imagine, that with a little work, Rigondeaux could attract far more positive publicity and attention than he does at the moment. After all, in addition to his brilliant boxing skills, Rigondeaux has a compelling back-story of his own, having been forced to leave his wife and children behind in Cuba in order to chase his dream of becoming a professional boxing champion in America.

Unfortunately, HBO’s and Arum’s treatment of Rigondeaux has done a good job of putting a negative slant upon the Cuban’s reputation. He has found himself out in the cold and avoided by the other big names and so called ’world title’ holders at his weight. Now the managers and promoter’s of fighters such as Scott Quigg, Carl Frampton, and Kiko Martinez can avoid putting their men into the same ring as Rigondeaux, by using the excuse that he is too negative and not a ’draw’ with the fans.

This Saturday, July 19, Rigondeaux finally enters the ring for the first time in 2014, when he defends his WBA and WBO world super-bantamweight titles against veteran Thai contender, Sod Kokietgym, at the Cotai Arena, Venetian Resort, in Macao, China.

With all due respect, to Kokietgym, this is the kind of fight that is more or less an insult to a boxer of Rigondeaux’s talent. Instead of being given the kind of big fights which his ability deserves, Rigondeaux is being matched up with a fringe contender who has fought much of his career in obscurity, and will be a total unknown to many boxing fans outside of Thailand. Despite a statistically impressive record of (63-2-1, 28koes), Kokietgym’s only real claim to having operated at anything approaching this level before in his career, is his two fights with Daniel Ponce De leon, for De Leon’s WBO world super-bantamweight title, way back in late 2005 and mid 2006 . Kokietgym actually gave De Leon all he could handle in their first fight, dropping the champion in the 2nd round, and making a battle of it all the way, before losing on points. In the rematch some months later, Kokietgym was knocked out in the 1st round. These encounters with De Leon remain Kokietgym’s only career defeats, but in the years since, he has fought a long parade of mediocrity in Thailand, and this, along with his advanced age of 37, does not bode well for his chances against Rigondeaux. In all honesty, Kokietgym looks to have little chance against the Cuban maestro, outside of being able to pull off something truly extraordinary. The main question about this fight is whether or not Kokietgym will be able to last the distance. If he comes forward and really tries to make a fight of it against a master counter puncher such as Rigondeaux, then the answer must be a firm no.

Rigondeaux’s title defence has been hidden away on the same bill as Zou Shiming’s first ten-rounder. Shiming is a former Olympic champion in his own right, but far less accomplished than Rigondeaux. With a possible audience of over 1 billion Chinese fans eager to follow Shiming’s professional progress, Uncle Bob is being very accommodating to his budding Chinese star.

If there is a silver lining for Rigondeaux this Saturday, beyond finally being able to enter the ring again, it is that this fight will be the last under contract to Bob Arum and Top Rank, and that once it is over, Rigondeaux will be free to pursue new promotional avenues. Hopefully, Rigondeaux can find a promoter and network who will appreciate him for the special talent that he is and be willing to put the work in to promote him as an elite world champion. Rigo deserves as much.

It doesn’t really take much of a search to find some interesting and exciting matches for Rigondeaux, provided that certain fighters can be tempted out of their comfort zones, and perhaps a new promoter, with a new and positive attitude towards Rigondeaux, can make some of these possible fights become a reality.

This weekend will hopefully signal the end of Rigondeaux’s bitter falling out with Arum and HBO, and the start of something fresh and new. One of today’s best exponents of the sweet science may finally find himself reaping the benefits that his ability deserves.

The star of the show, for the Chinese, will be Zou Shiming, (4-0, 1ko) who will be having his first 10-rounder, when he takes on Luis De La Rosa (23-3-1, 13koes). This fight will also be Shiming’s first professional title fight, as he and La Rosa, will be fighting for the WBO International Flyweight championship. Bob Arum will be hoping that this fight represents Shiming’s first step towards a world title, how realistic that hope is, remains to be seen. Despite all of his fans, and uncle Bob’s best intentions, Shiming has so far shown himself to be woefully short of the type of talent needed to win a professional world title, even in these times of multiple and diluted, world championships.

Also on the card, will be former World flyweight champion Brian Viloria, (33-4, 19koes) who begins the road back with an undemanding looking fight against Jose Alfredo Zuniga (11-5-1, 5koes.)

There is further Chinese interest with: