Last week, an article published in Deadspin by Iron Mike Gallego (AKA Daniel Roberts) brought a direct focus on Floyd Mayweather and his many cases of violence against women. It was a well-written and likely well-intentioned piece that has generated more questions than it possibly strove to answer. 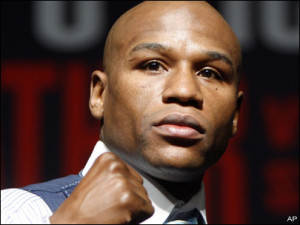 The big question, though, is the following– how relevant, exactly, is a fighter’s history of domestic violence to his profession as a prizefighter? Is there a need for a dogged media focus on such issues as part of general boxing coverage? And, if so, shouldn’t there be a burden placed on those willing to point fingers to assess everyone with the same critical eye?

The late Diego Corrales is a beloved figure among hardcore boxing fans. He is rightfully revered for his warrior’s spirit and willingness to put his heart and soul into each and every fight. (His image has even been worked into the unofficial logo of this site). In Gallego’s article, Corrales is referred to as “a deeply troubled, but usually benevolent soul.”

However, back in 2000, prior to his bout with Floyd Mayweather, Corrales assaulted his pregnant wife, breaking her collarbone and bruising her spine in an attack the deputy district attorney called “absolutely brutal.” Corrales would spend fourteen months in prison for the offense. (Ironically, Mayweather would go on to dedicate his dominating TKO of Corrales to “all the battered women in the world.”)

So, a “right-minded” media interested in social justice would certainly have to re-write and reassess the boxing legacy of Diego Corrales, right? Were we supporting spousal abuse when we watched him fight or shared his videos online?

Are we promoting domestic violence when we laud Carlos Monzon, Jake Lamotta, Sugar Ray Robinson, and a legion of other fighters whose brilliance inside the ring was countered by some ugly emotional and psychological defects outside of it? Many of boxing’s greatest heroes would find themselves forever tarnished if subjected to the same scrutiny some would like to apply to Mayweather.

The double standard with Mayweather is that, for the same reason he is coddled by the cheerleaders of the boxing media, he is being reviled by his dedicated critics. It’s because he’s successful, very successful, that he wears this singular target.

Simply being a bigger target doesn’t necessarily make Floyd Mayweather a correct target. Mayweather’s money and success, as well as his disagreeable public behavior, make it easy to sidestep the nuances of this complex issue and dial up the lynch mob. In other words, it’s okay to go for Mayweather’s jugular because he’s such an unmitigated, unrepentant prick. Nobody, like in the case of Corrales, ever calls for the heads of the “nice” guys or the guys who fit into the media’s romantic notion of what a fighter should be. Carlos Monzon is approached with reverence by the boxing writers of today, and properly so. Monzon, the man, was a monster and a serial abuser of women, who killed his mistress by throwing her off an apartment building balcony. But people instinctively know to separate the man from the work– especially in the world of big-time prizefighting where a great number of those competing come from dark places in society. Pointing fingers of righteous indignation in the seedy world of boxing will get you absolutely nowhere.

Domestic violence, on all levels, is an infinitely delicate and complicated issue. Right or wrong, most people (media included) steer away from it. I don’t see guys like Dan Rafael and Kevin Iole as particularly qualified to speak to these issues, nor do I see these issues as relevant to any sort of fight coverage. All of the instances mentioned in the article in question have been reported previously and are on the public record. How often are we to bring them up during the course of Mayweather’s life and how loud do we scream if the stories fail to deliver the result we like?

Gallego mentions the media’s refusal “to ask any of the questions raised by his conduct, let alone hold Mayweather responsible for it” and that this, somehow, has enabled him to continue in his abusive behavior. But what’s the alternative– hounding him day and night with angry rhetoric? Filling each press conference with media members acting the role of social worker? Maybe a lynch mob is in order. To what extreme do we take this if, once again, details of Mayweather’s unsavory personal life fail to deliver the result we had expected?

Boxing has become a niche sport and one of the last bastions for the non-politically correct, drink a beer and cheer for blood male crowd. Maybe that is the reason that Mayweather’s sins don’t resonate as loudly as they would in a more mainstream environment. Boxing has a long history (tradition) of giving shelter and support to extremely bad men who would not be accepted and allowed to thrive in any other legal line of work. What allows for a street thug to find saving grace through the sport may also allow guys like Mayweather to get away with more than would normally be the case in other sports and/or showbiz. The kids who take up boxing are usually not saints– and neither are the fans who seek out man-on-man brutality as a form of entertainment. Nobody in and around the boxing business has much room for moral indignation.

The reality is also that celebrities are judged differently than us normal folk. It’s not just Mayweather, but a whole cast of men and women whose fame gets them an easier ride through life and whose talent allows them a wide berth for all sorts of pathological personality flaws. It’s not fair, but it’s the reality. Bringing Mayweather down won’t do anything but appease those looking to settle some unspoken score. Maybe, for some, that’s been the point all along.

I’m not claiming to have the definitive answer to these question of whether Mayweather’s violence towards women is pertinent to the coverage of his boxing. But if it is, those media members who treat his familial strife like their own personal sandbox better be ready to point the finger at every guilty party, all of the time, with the same self-righteous fervor. Otherwise, the Mayweather hunt comes off as little more than a personal vendetta brought to the black and white of a major website.

I don’t have a problem with the Deadspin article being written, nor in any way, shape, or form am I defending Mayweather. I do have a problem, however, with the idea that the end game of this particular piece seems focused on knocking Mayweather off his pedestal. It comes off like the real crime isn’t that he does these things, but that he’s so rich and successful despite doing them. The impression left is that the author feels people haven’t properly scorned Mayweather and, because of this, Floyd has a collection of sports cars and wears a fresh, out-of-the-pack pair of Macy’s boxers each day.

The situation is similar to that of Adonis Stevenson, who served twenty months in prison for his role as enforcer in a human trafficking ring in Quebec. Stevenson was accused of some disgustingly brutal crimes against the prostitutes working under his command, but the issue had not been very well-documented during his rise to prominence in the boxing world.

With Stevenson, as with Mayweather, the issue is whether we can (or should) treat him any differently as a fighter for the crimes he committed far away from the ring. I wrote this about the dilemma back in May’s Man and Superman (Adonis Stevenson in Full View) and I think it applies to Mayweather’s situation as well:

But, in boxing, the bad guy often wins and, very frequently, the good guys aren’t very good people at all. The best and most gregarious of good sports can really be a foul, ugly beast behind closed doors; the arrogant villains can sometimes be good, humble family men. Boxing is a sport of extremes and its characters are human beings raised on the fringes of society and far, far away from the well-fed middle class pleasantries known by the sport’s media.

The modern boxing writer has not been able to deal very well with this dichotomy of character in the sport he covers and has become almost belligerent in not messing with anything that serves as a buzzkill to his naive romanticism.

These days, the major roadblock to reform in the sport comes from this reluctance to “ruin” the boxing facade by dwelling on the dark and complicated.

This is also the reason behind the boxing world being the last to know about Adonis Stevenson’s sins.

As a fighter, Adonis “Superman” Stevenson is a joy to watch. Heavy-handed and bursting with self-confidence, he walks through opposition and crushes their will. One can almost see his opponents’ spirit shrinking in the face of the onslaught, slowly falling to pieces in the presence of a fighter with an almost supernatural will to dominate.

As a man, Adonis Stevenson is a wretched, pitiful beast who has never truly made amends for his sins nor even expressed real remorse for what he did. Twenty months in prison is nowhere near “paying his dues to society.”

It’s okay to acknowledge both sides of Adonis Stevenson…

The story of Adonis Stevenson isn’t one of black and white, movie of the week redemption. It’s the story of a man who used brutality to force women into a life of virtual slavery and, frankly, to this day, doesn’t seem too torn up or repentant about any of it. Stevenson’s story is also the story of a talented man who can do tremendous things in the ring and has earned his spot among the elite of the sport.

Both stories should be told. In the real world of boxing, neither cancels out the other. And, really, that’s okay.

You can email Paul at paulmagno@theboxingtribune.com or watch as he enters into his sixth straight year of outraging boxing nerds everywhere. You can also buy his book, Notes from the Boxing Underground! Paul is a full member of the Burger King Kids’ Club, a born iconoclast, and an ordained minister in the Universal Life Church.