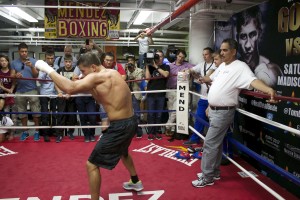 Today, the press assembled at Mendez Boxing Gym for the fighters media workouts, here are quotes from the four combatants;

The Boxing Tribune- You’re smiling a lot and seem very relaxed, are you always this confident before a fight?

Mike Perez– Always, always. People say that my last fight wasn’t the best fight and it wasn’t. But my concentration wasn’t there after what happened in the Magomed Abdusalamov fight. And people didn’t help either, I was getting bad messages from my friends asking me what I did to that guy, and all I did was my job. But I thank god that he’s doing better and everything’s good.

The Boxing Tribune– So are you 100 percent focused going into this fight?

The Boxing Tribune– All of the major sanctioning bodies have you ranked in or right at their top 10, If you win this fight have you thought of the route you want to take to get a title shot?

The Boxing Tribune– Are you concerned with the length of time you’ve taken off in between fights?

Bryant Jennings– I’ve had two six month layoffs In my career, so I know what it’s like to deal with so called ring rust.

The Boxing Tribune– Many heavyweight greats like Philadelphia’s Joe Frazier have fought at Madison Square Garden, how does it feel to know that you’ll be on that stage?

Bryant Jennings– It’s two different era’s and I wish I could relive that era because I would probably fit in that era better. Nowadays we have more things to fight; I’m not only fighting my opponent, but I’m fighting my critics, the unhappy fans and the fans that want to see a knockout instead of some ring generalship. So, fighting in Madison Square Garden is great, history wise, but in today’s world, I think we have to reevaluate that question.

The Boxing Tribune– Golovkin’s promoters have built him up as somewhat of a hometown fighter here in New York, and you’ve defeated boxers, like Felix Sturm, in their own backyards before. How do you think that experience will impact you in this fight?

Daniel Geale- That experience is going to be great for me, I’ve basically had the whole crowd against me when I was in Germany and it fueled me on, it pushed me and made me want to work harder and prove people wrong. So, I’ve been this position and it motivates me, I like it, I prefer to be the underdog.

The Boxing Tribune– Your last fight in the United States didn’t go so well, while other fighters in or around your weight class like Sturm, Sam Soliman and Arthur Abraham fight mostly in Europe and Australia, you’ve made the decision to come back and give it another go in the U.S., why?

Daniel Geale– Well, it was a close fight in that last one, but I felt I have more to give. I wasn’t quite at 100 percent in that fight, but I knew I would give it another chance, whoever it was going to be, whether it was the best fighter in the world or not, I’m going to be better and that’s what I want to do in this fight.

The Boxing Tribune- You’ve spoken openly about your mother’s current battle with cancer, has that motivated you at all going into this bout?

Daniel Geale- It’s motivated me huge, it’s a big reason why I really wanted this fight. I want to fight the best fighters and I’ve got so much motivation back home, my mom has got a fight of her own back home and she keeps telling me, you keep working hard Daniel and I’ll keep fighting this and that motivates me a lot.

The Boxing Tribune– Are you concerned with the layoff you had to take after the death of your father?

The Boxing Tribune– Have you done anything different in training to try and offset it?

The Boxing Tribune– Do you think you’ll add to your impressive knockout percentage on Saturday night?

The Boxing Tribune– How does it feel to headline the arena at Madison Square Garden?