When a the 6-foot-4-inch, 250-pound Mexican American heavyweight named David “Nino” Rodriquez ran up an impressive record (on paper) of 36-0 with 34 wins coming by way of KOs, many took notice and asked, is this guy for real; is he another Deontay Wilder? But 24 of his stoppages came in the first round signaling that if anyone took him deep, something unexpected might happen? Moreover, his level of opposition reads like a Who’s Not Who in Boxing. Said Pedro Fernandez in Ringtalk on January 7, 2013, “LOOK AT THE NUMBERS, 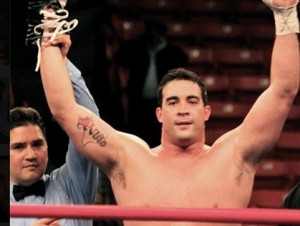 HIS FOES & TRY NOT TO PUKE!” None the less, he won the Texas heavyweight title, the New Mexico heavyweight title, and the WBC Fecarbox Latin title. His KO of the shot Owen Beck left “What the Heck” on the canvas for a scary 15 minutes.

After Rodriguez knocked out Brian Polley in spectacular fashion in December 2011, he was the victim of a knife attack (an altogether intriguing story in and of itself) that left his face badly scarred, but he survived. After surgery and a lengthy rehab, he badly injured his knee—and this too required surgery and still another long recovery. If nothing else, David displayed plenty of grit, for many a lesser man would have given up.

The stage was set exactly two years later for an interesting six rounds of boxing in Atlantic City and that’s exactly how it turned out in what might have been the most exciting fight probably no one ever witnessed. The seasoned “Ding-A-Ling Man, “Darnell Wilson, upset Nino with a dramatic last second KO—yes, last second. The fight was reasonably close until the articulate and affable Wilson cut Rodríguez and then, aroused by the blood, went after him with crunching and whistling left hooks—his signature punch. It looked like the bigger David would survive forcing the fight to the cards, but Wilson swung a final nasty and scary left and it landed flush and fully leveraged sending Rodriguez down and out as referee Lindsey Page waved off matters without a count at 2:59 of the sixth and final round. David fell like he was hit by a lead pipe. It was reminiscent of when Wilson almost decapitated Emmanuel Nwodo on ESPN Friday Night Fights back in 2007 with one of the most devastating KO’s ever seen on ESPN or anywhere else

Had the fight lasted one more second, Nino would have won the decision. Here is the end: http://www.youtube.com/watch?v=P_yvnF1xyyQ

In July, 2014, Nino met the heretofore dreadful Raymond “King Kong” Ochieng (24-17-3) from Kenya in a 4-round affair in El Paso. Kong had been beaten in 8 of his last 12 including a first round TKO to 49-year-old Bronco Billy Wright which begs the question, what is a guy from Kenya nicknamed “King Kong” doing fighting a 49-year-old in Jefferson, Missouri? Moreover, seven of Kong’s wins have come against hapless Robert Ochung (0-17-1). However, every time Ochieng stepped up, he was quickly dispatched.

As for Nino, Ochieng seemed to be the perfect confidence-builder. But the long layoff revealed a different 36-year-old than the one who destroyed Owen Beck as Ochieng quickly landed a big left hook that dropped Nino in the early seconds of the fight. Unable to recover, he then was the recipient of a quick mugging that included a left and punishing right that brought him down one more time. Referee Robert Velez then waived it off and that was that as the stunned crowd looked on in disbelief. The official time was 1:37 of round one. Here is a link but you have to be patient to see the entire Kenyan assault: http://www.kvia.com/video/david-rodriguez-gets-kod-during-sportscast/27039846

“I’m sorry I let my fans down. I haven’t been the same since two years ago”—David Rodriguez

Here is David’s retirement announcement and you can’t help but feel for him, but like so many others, he found out that the harsh business of boxing grants few happy endings.
http://www.kvia.com/video/in-his-own-words-el-paso-boxer-david-rodriguez-retires/27042996