In the ring, Marcos Maidana is all about business, but this fighting fire he displays after the opening bell is offset by a cool, calm, and casual attitude away from the ring. Some would argue that it was precisely this nonchalant, unflappable-under-pressure attitude that allowed him to be so competitive against Floyd Mayweather in last May’s big money showdown between the two. The heavy-handed Argentine seemed to be completely unaffected by the bright lights of boxing’s biggest stage and went at his mega-star, future Hall of Fame opponent like he would go after any other fighter. 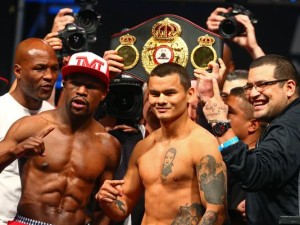 At the end of twelve rounds, Maidana lost via majority decision, but the real story was how well he would manage to do in issuing Mayweather his toughest challenge in about twelve years.

Now that the rematch is set for September 13, though, the pressure will be extra intense for Maidana. The oddsmakers at My Top Sportsbooks think that Maidana will once again be hard-pressed to beat the five-division world champ, making him a +500 underdog (and Mayweather a -800 betting favorite).

Of course, this is no surprise. However, expectations will be greater this time around and, most of all, Mayweather will likely be sharper, more focused, and eager to prove that last fight’s relatively close encounter was just an anomaly.

Mayweather, who makes it a habit of avoiding punishment in the ring, tasted his own blood in the last fight and was made uncomfortable for long stretches of the bout. There’s little doubt that, this time, Mayweather will be taking Maidana as a more serious threat—and, when that happens, we tend to get Mayweather at full speed.

So, the Catch-22 when it comes to Maidana is that he must be more consistent and perform better this time around if he wants to push Mayweather to defeat, but he also has to maintain his cool, calm demeanor. The unflappable, unaffected Maidana who disregarded the flashing lights and increased media scrutiny of boxing’s biggest stage must show up once again—but with extra fire for the actual fight.

Early indications are that Maidana is the same old Maidana. When not taking selfies from the main table at his own press conference or playfully pushing an increasingly-enraged Mayweather in a face to face staredown, Maidana calmly talks to the press with, seemingly, not a care in the world.

Only time will tell if Maidana, the cool customer, has a few surprises in store for boxing’s cash cow. But what we do know is that, once the bell rings, we’ll get the best he has to offer.