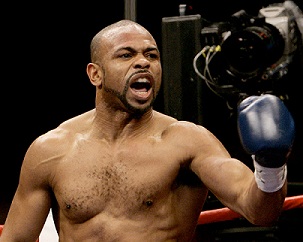 It was a one sided affair for as long as it lasted, with the 45 year old Jones being too fast and accurate for Fry, who barley landed a clean shot the entire bout.  Jones scored a knockdown in the closing seconds of the fifth frame, courtesy of a left hook, and through Fry beat the count and returned to his corner at rounds end, it was decided he couldn’t continue and the bout was stopped, awarding Jones the TKO victory.  It was his first stoppage win since 2009 when he scored an RTD 10 win over Jeff Lacy.

Jones thanked the fans, and Fry in the post-fight interview and closed out the night’s event with a live performance of his song “Can’t be Touched”. This was the fourth straight win for the future Hall of Famer since suffering three consecutive losses in 2009, 2010 and 2011.  After closing out 2011 with a decision over Max Alexander, Jones has fought once a year, winning the WBU cruiserweight title in his last contest in Russia.

This was Fry’s third straight loss.