There was something beautifully brutal about Gennady Golovkin’s (30-0, 27koes) three round demolition of Daniel Geale (30-3, 16koes) on Saturday, in defence of his WBA world middleweight title, at New York’s famed Madison Square Garden. Although this was Golovkin’s third appearance at ’the Garden,’ it was his first in the ‘main room,’ and he delivered a performance worthy of the historic venue. 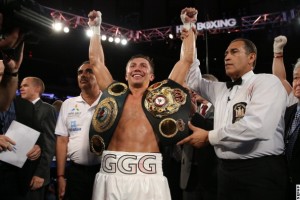 Daniel Geale arrived with the credentials that made him the champion’s most formidable challenger so far. He was a former world champion himself, who had never been stopped during his career, and had not been so much as floored, for many years. However, in the end, Geale fell like all of the rest. Indeed, when faced with what was on paper, his greatest challenge so far, Golovkin gave one of his most comprehensively destructive performances to date. It was a performance, which surely took Golovkin one-step closer to the super fights that he craves. After this victory, the excuses of the divisions other ’world champions’ (specifically WBC, and lineal champion Miguel Cotto) for not facing the ‘GGG’ man, are becoming ever weaker.

The challenger entered the ring seemingly unnoticed by the crowd, but when Golovkin entered, the buzz around the historic hall became palpable. Golovkin approached the ring to the rocking strains of The White Stripes “Seven Nation Army” which is a fitting track for the hard-edged fighting style of the champion. The entrance music aside, Gennady was all business as he approached the ring like a man in a hurry. As he would later say in the post fight interview, ’This is no joke’. Golovkin’s business is destruction.

Daniel Geale came to fight. That much was evident from the start of the first round, when the challenger looked to make use of his herky-jerky style by moving about on the outside of the ring, and firing off some jabs and uppercuts at the already stalking champion. Despite his ferocious reputation, Golovkin tends to use the first round or two of his contests to feel out his opponent, before committing himself totally to his decisive attacks. Even so, such is the destructive power in his hands that Golovkin usually manages to hand out some crucial damage, even while studying his competitor. While Geale tried to circle around him and landed some determined looking jabs, the champion stalked, taking centre ring, and fired some early jabs of his own, which were finding the challenger’s face already.

Golovkin’s punches are understated at first sight; they are not dramatic or flashy, his shots are short and precise, and delivered with perfect balance. It is this mixture of precision, balance, timing, and speed, allied with a strength that seems to belie his almost slight frame, which merges together to create such impressive effects.

Perhaps the timekeeper was especially engrossed in this opening round, as it ran on for close to five minutes, before finally being brought to a halt.

As the over long round moved on, Geale continued to stay on the outside of the ring, while stopping his movement every now and then to fire his sporadic attacks. The challenger’s strategy seemed to be to move in and out, scoring with jabs and flurries, then getting back on the move, and providing as slippery a target as possible for his heavy-handed antagonist. As strategies go, it made sense, and seemed the perfect fit for a durable, all-round boxer such as Geale. Yet, as the fight unfolded, it would become evident that it will take much more than simply a good strategy to derail the fighting machine from Kazakhstan.

Golovkin was already beginning to land his jab with more regularity the further the first round travelled. In the last minute of the round (which was actually its 4th minute), Geale slipped to the floor after getting his foot caught upon an over zealous camera operator’s camera. No harm was done, but it was a portent of things to come.
When the round was finally called to its conclusion, Geale was already cut over the right eye, by virtue of the champion’s pinpoint jabs.

Geale began the second round fast, landing some multiple jabs, and a good right hand. The GGG man responded with a scything left hook, and a series of left jabs that drove his challenger back onto the ropes, where a body shot, followed by a right-left-right combination, dropped Geale to the canvas by the ropes. No slip this time.

On regaining his feet, Geale was wearing the expression of surprise and bemusement previously seen on the faces of past Golovkin opponent’s. For all of the talk surrounding his punching prowess, Golovkin’s challengers still seem genuinely shocked when they experience the full force of a GGG attack. Perhaps it is the speed and subtlety with which it strikes. Who can forget Curtis Stevens’ almost comical expression when he was floored in the second round in his fight with Golovkin last year. Certainly the impression Golovkin’s attacks have on his challengers is a lasting one, from beginning to end.

Showing admirable spirit, Geale returned to the fray, with a look of grim determination, although perhaps knowing deep down, that this fight was heading towards only one conclusion. With his cut right eye reopened, what had been a bright start to the fight by the challenger just minutes earlier was swiftly falling apart.

Despite this disintegration, Geale continued to fight back, but there was a tinge of desperation in his work now, as his punches were mostly being deftly blocked, by the muscular arms of the champion. All the while Golovkin continued to take his time over his work, like a surgeon performing an operation, or an artist putting the finishing touches to his latest work. Nothing is wasted by Golovkin, every punch, and every step is measured, and has a reason and a purpose.

In the closing moments of the second round, Golovkin landed some thudding body shots that were all of the better to soften up his prey. While Geale’s punches seemed to simply bounce off the world champion, if they were not blocked or deflected by his long muscular arms, every punch that the champion lands seemed to have an ever-more debilitating effect upon the challenger.

The challenger’s spirit was unbowed, as he came out for the third round defiantly throwing leather, a left jab, then two right hands, first to the head, then to the body. Once more, they seemed to simply bounce off the champion, who resumed his forward march behind a probing, pole-like left jab. Geale grabbed onto a brief moment of glory, when after skilfully slipping some Golovkin punches, with a nifty bob-and-weave, he allowed himself some celebratory showboating. Geale’s mischievous display produced not a flicker of emotion on the champion’s visage, and yet, this is the point where Golovkin chose to step up his attack. Geale was shaken by a left hook to the head, which backed him up into a corner, where Golovkin landed thudding lefts and rights to his body. After gingerly escaping from the corner, Geale skirted around the edge of the ring, with the GGG man in cool pursuit, picking and probing, looking for that final opening. Geale’s movement, which at the first bell of the contest was part of his strategy to try and win, became his only method of survival.

Geale couldn’t avoid the GGG man’s pinpoint shots for long, as the ring became smaller and smaller for him. Golovkin fired a right, then a left hook, which momentarily froze Geale, and then a straight right to the chin dropped the challenger onto his back by the ropes. Geale got up quickly, but he staggered backwards, his balance gone, his eyes bleary. When referee Mike Ortega asked him if he was all right to continue, Geale gave a brief disconsolate shake of the head and the fight was over.

This was Gennady Golovkin’s 10th defence of the WBA world middleweight championship that he won in late 2010 and his 17th straight stoppage victory. Some critics have questioned the quality of some of Golovkin’s challengers, but since the beginning of his career, the GGG man has impressed not so much by who he has beaten, but how he has beaten them. There can be no denying that Golovkin is one of the most efficient and destructive fighters, pound-for-pound, currently on the planet.
Perhaps it shouldn’t be surprising that the other ‘world champions’, at 160 pounds, are not beating down any doors to take on the GGG man.

In his post-fight interview, Golovkin called out (politely of course) all of the other ’world champions’, but especially Miguel Cotto, the WBC and linerel champion. While some would use trash talk and profanity to go with their challenges, Golovkin seeks to appeal to the fighting pride of his fellow champions. Golovkin wants to give the fans what they desire, the best fighting, and the best in unification fights. It is an almost quaint desire on the part of the Kazakhstan fighter. He is a throwback to the time when the best really did fight the best, and this is another reason for the GGG man’s growing appeal amongst the boxing public.