Hola family and welcome back to a cilantro, lime and guajillo chilli infused edition of Central Florida’s number one foul-filled weekly pugilistic paper, The Sunday Brunch. We are the shell fragment that totally ruins your otherwise creamy scrambled eggs.

In this episode we’ll be discussing the “Krusher” and how he’d fare in a Kumite-sponsored brick destroying contest with Frank Dux from Bloodsport, also, whether or not Brandon Rios can feel pain. Finally, we’re going to be wrapping it up with some Count Drakulich talk and some possible Walking Dead spoilers. Bust out the adrenaline 1/1000 and clear your cache of the boxingscene malware, we’re about to start the show… With that being said, I gave you your instructions in the dressing room; what I say you must obey – Cuidate, escucha me, toca los manos y buena suerte…Let’s get it on!

One has to wonder when they see a referee like Vic Drakulich warn a house fighter like Amir Khan (See:Khan vs. Collazo) for holding and fouling dozens and dozens of times before issuing a penalty late in the fight, what his real motives are.

On Saturday night in Las Vegas, Nevada, Argentine, Diego Chaves was warned once (and subsequently quickly docked a point) for doing something nearly every fighter in most every prize fight does – tie his opponent up when it provides an advantageous or tactical benefit.

From an unbiased, objective point of view, it seemed that referee Drakulich was listening to Brandon Rios (or perhaps a very wealthy outside pre-fight pep talk) a bit too much. At the time of Chaves’ disqualification, Rios was nearly non-stop headbutting and twisting the Argentinian’s arm.

So, the fight had some fouls from both sides. Rios walks in with his head down which initializes many headbutts, maybe a judo-style throwdown mixed in for good measure, while Chaves had a few veteran tricks of his own, though less blatant, aside from the DDT he performed (which left Rios laughing on the canvas).

Post-fight it was almost humorous listening to Rios’ trainer, Robert Garcia complaining about dirty tactics when his fighter was much more guilty and not to mention that Garcia has been on video several times in different fights telling his charge to fight dirty.

Aside from the highly questionable, suspect “refereeing” from Vic Drakulich, the fight was actually quite good. Rios still possesses his rock solid beard (though doesn’t seem to carry his knockout power with him at the higher weight) and ‘take two to land one’ style.

Diego Chaves was boxing well at range, keeping sharp his counter punches and one-twos in the face of the ever charging Mexican American. Chaves was actually up on the official scorecards by a point at the time of the DQ.

It’s not that often in today’s fight game that two guys have such a genuine dislike for each other. It is unbelievably counterintuitive (especially for the fans) to overly officiate such a bout. With any luck, the two will get together again, this time with a real referee and give another great account of themselves. 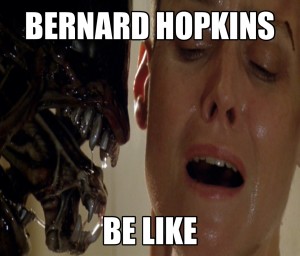 After Sergey Kovalev’s second round disembowelment of Australia’s Soda Popinski (which was preceded by a flash knockdown of Kovalev that appeared to be more a case of having his foot stepped on rather than the punch that landed), the “Krusher” was approached by none other than the artist formerly known as the Executioner, “The Alien”, Bernard Hopkins.

Kovalev’s power and aggressive style allows for his incredible knockouts, but he seems to have a problem with defense. On the other side of the same token, Hopkins’ ring IQ is among the highest in the entirety of the sport, however, he will be nearly 50 years of age by the time the two meet in the ring.

One could easily envision a scenario where Hopkins uses his superior intelligence and experience to befuddle the Russian over 12 rounds en route to unifying the light heavyweight division.

However, from a more realistic point of view (though, I’ve altogether stopped betting against The Alien), Kovalev need only catch Bernard with one or two clean punches to send him into a retirement home. This will be one to look out for, for sure.

Thanks for joining us again this week, team. Don’t forget in October The Walking Dead season five starts! Will Rick and the gang escape the train car prison? Will Beth and Darryl ever hook up? Is Glen going to die? Are the Terminus denizens cannibals? Will Tyrese and Carol be able to witness Rick, Michone, Daryl and Carl get captured and therefore somehow communicate with them in order to retrieve Officer Grime’s bag full of guns buried outside of Terminus? Stay tuned! We’ll have all these answers and more boxing talk in our next episode! Until then, sante.