I always get a kick out of messages and emails that accuse me of being Pro-Mayweather, pro-Haymon, or pro-Golden Boy, especially since I get just as much feedback saying that I’m anti all of those people.

Fans and media seem to be suffering through a peculiar affliction these days when it comes to boxing. Consider it a weird hybrid of mental conditions– 90% Stockholm Syndrome, 9% Dissociative Identity Disorder, and 1% General dullness.

For whatever reason, way too many observers of the sport, even those who like to consider themselves “informed,” seem intent upon “choosing sides,” and identifying with one particular management/promotional camp over another. This “us vs. them” mentality adds yet another roadblock to ever getting those with all the power and all the money to do right by the sport and its fans. 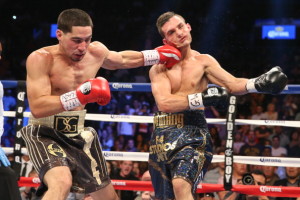 The funny part is that it doesn’t matter if you’re “Pro-Haymon” or “Pro-Top Rank” or “Pro-Golden Boy.” It doesn’t really matter one bit because the truth is that, at their core, they are all the same.

The business of boxing is set up to give the consumer as little reward as possible and, at the same time, maximize revenue for those calling the shots. It’s not much different than any other business where quality to the consumer is balanced against expense to the business. Although, admittedly, the bar is set a lot lower for boxing.

In boxing, there’s supposed to be a system of checks and balances built into the business structure. The manager looks after the best interest of his fighter by pursuing the easiest fight for the most money. The promoter looks to make the best fight for the money allocated. Finally, The TV network looks to put on the best show for the most cost-efficient price.

The end result should be a good, solid, cost-efficient card, forged like a diamond from a lump of coal by the pressure coming from all sides.

But what if there’s collusion among the parties involved or some weakness built into the three-branch fight-making structure? Well, then there’s no diamond– just a lump of coal.

And that takes us to Saturday’s bottom of the barrel suck-fest at Barclays.

There’s something screwy going on over at Golden Boy Promotions and it’s not too far of a leap to conclude that it has something to do with the whole Al Haymon mess. Suddenly, Oscar De la Hoya and company can’t put together a competitive bout and, honestly, don’t seem to care all that much about it. And Showtime, looking to fill TV dates, is taking the junk issued to them and passing it off as premium content.

On Saturday night, No. 1 ranked junior welterweight in the world, Danny Garcia fought the light-hitting no.71 ranked lightweight, Rod Salka in a 142 lb. catchweight bout.

As predicted, this was an ugly mismatch that could’ve resulted in serious injury to the underdog. Aside from a true disparity in talent, ability, and experience, there was a most obvious size difference between the two. It looked as though Garcia was beating up his 14-year-old nephew and as Garcia let his hands go, it was clear that Salka was deeply, deeply overmatched.

The best anyone could hope for was that Salka wouldn’t be seriously injured– and that’s hardly the thought that should be racing through fight fans’ minds in the main event of a high-end premium cable card.

Don’t blame Salka for this mess. When presented with his biggest payday to date ($125K) and the chance to headline a Showtime card, there was no way the game fighter from Pittsburgh would let this opportunity pass him by.

Salka came to fight, and he did, but he was matched so far over his head that the end result was never in question from the moment the contract was signed.

The rest of the Showtime triple-header wasn’t much better as Lamont Peterson battered former prospect Edgar Santana for ten rounds before a mercy stoppage was issued and Daniel Jacobs clobbered Australian no-hoper Jarrod Fletcher at will until deciding to close the show in the fifth.

All in all, it should’ve been a night of pure embarrassment for all of those involved in this card. Whatever political problems are going on behind the scenes don’t justify horrid nights of boxing like this.

Showtime, which will take most of the blame from casual fans, attempted to put a positive spin to a rancid situation, trying their best to intimate that this was some sort of prelude to Danny Garcia vs. Lamont Peterson, but as friend and Boxing Tribune colleague Phil Rivera said to me shortly after the fight, there won’t be any more money in Garcia-Peterson in November than what could’ve been had here in August. There was no need to “marinate” Garcia-Peterson.

Prior to the card, Showtime Sports bossman Stephen Espinoza vowed to fall on the sword if the card turned out to be a dud. However, post-fight, all attempts to position that sword underneath him were thwarted by world class corporate denial.

“It was an entertaining night,” Espinoza told Boxingscene. “That’s what I promised people. I said it was going to be an action fight in the main event. I said it was going to be action fights all night. The reality is, it was entertaining. These opponents were picked because they were going to fight. And we all know fans want action, excitement and that’s what they got. Everyone went home happy.”

If Espinoza truly believes that, he has no business putting together high-end boxing shows.

Golden Boy, however, was not so diplomatic.

“Because Salka earned the shot,” Golden Boy Vice President, Eric Gomez told the post-fight media when asked about why this bout was ever put together in the first place.

Later, Gomez would double down on his talking points when questioned by Boxingscene’s David Greisman.

As for Golden Boy owner, Oscar De la Hoya, his only post-Barclays statement as of this writing is via his official Twitter account:

“congratulations to my Goldenboy team for putting together a great show. As always You shine in Your work.”

And what about Al Haymon? What scorn does he deserve for his part in this debacle?

Well, unless information comes out that he is somehow manipulating Showtime execs into doing his bidding, he deserves zero blame.

Haymon’s job is to take care of his fighters and generate as much money as possible for as little risk as necessary– and he certainly did that by arranging for squashes across the board for his fighters and juicy paydays of $700K (Garcia), $400K (Peterson), and $100K (Jacobs).

But this takes us back to the initial theme of this Rant.

Boxing is a business– a great, big dysfunctional business that preys on the loyalty of its customers. It would be to everyone’s benefit if they stopped identifying with a certain side or camp. No matter how many “Money Team” shirts you own, you are NOT on The Money Team and whether you loyally buy every Top Rank pay-per-view, Bob Arum still thinks you’re a moron.

The fact of the matter is that everyone putting on a major show in boxing these days is looking to screw the fans to some degree. On Saturday at the Barclays Center, it just happened to be Golden Boy doing the screwing.