This Saturday at the Stub Hub Center in Carson, California, two undefeated welterweights square off in a scheduled 12 round contest as Shawn “Showtime” Porter (24-0-1, 15 KO’s) makes the second defense of his IBF welterweight crown against the U.K.’s Kell “Special K” Brook (32-0, 22 KO’s). The bout is the headlining contest on a 12 fight card, and will be televised by Showtime.

Porter is a work in progress, but the 26-year-old champ displayed much improved skills on his way up the ladder. After fighting Julio Diaz to a draw in 2012, he came back nine months later to take a comfortable 10 round unanimous decision in the rematch and win the IBF North American welterweight title as well as successfully defend the NABO crown he had won prior to the first Diaz fight. 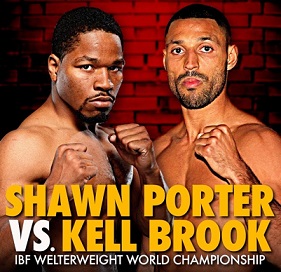 Just three months following his win over Diaz, he took a unanimous decision over Devon Alexander to win the IBF world welterweight title. Despite disadvantages in height, reach, and overall boxing ability, Porter was able to outwork the defending champ, wear him down, and hurt him on several occasions. It wasn’t the prettiest fight at times, but Porter got the job done and left with the title.

In April he took part in a four round drubbing of Paul Malignaggi. Again being at a disadvantage in boxing skill and over all experience, Porter was the aggressor from the outset, had the former two-time world champion cut in the opening frame, and out of commission before the end of the fourth round. If you know Malignaggi, then you know this was no easy task as he had been the distance with Miguel Cotto and Adrien Broner, went into the 11th round in his only stoppage losses to Ricky Hatton and Amir Khan, and had just come off an impressive NABF title winning effort over Zab Judah just four months prior. Porter however, had little trouble with the “Magic Man”.

Kell Brook brings something different to the table though. The Sheffield native is a former holder of four regional titles and comes in on a four fight knockout streak. He’s the mandatory challenger for Porter’s IBF strap, and he knows this is the only reason he’s getting this shot. As he put it in an interview with Sky Sports News, its “high risk, low reward” for team Porter, but he aims to capitalize on the opportunity.

Though his pro ledger doesn’t match up with the quality of Porters opposition, he brings not only boxing ability into this fight, but power as well. Porter had little to fear in his last two outings and was able to walk through his opponents’ best shots in order to get to his intended target but against Brook it may not be so easy. The Brits counter punching ability coupled with his power could cause the champ a few problems as the fight wears on as long as he can stand up to Porter’s power. He has been known to lack in defense at times, focusing on the attack while leaving himself open for incoming shots. Against a strong fighter like Porter he won’t last long if that’s the case.

For Porter to come up with the win, he’ll need to fight smart. He won’t be able to walk through Brook’s shots as he did with Malignaggi, so he’ll have to work his way in and take advantage of the challenger’s defensive shortcomings, wear him down, outwork him for as long as the fight lasts. Brook will have to do his best to control the pace of the fight, use his boxing ability to keep Porter at a safe distance and be patient, and pick his shots. He’s plenty confident and motivated by playing the role of the underdog, but he may be bordering on over confidence, as he stated to ESPN that he felt he could stop Porter as early as the first round. Not the best game plan when you’re fighting a world champion, and your toughest opponent, so far out of your own time zone.

A lot is at stake for both fighters Saturday night, aside from their undefeated records. For Shawn Porter, a win could lead to an opportunity highly coveted by any fighter between the light welterweight and middleweight divisions: a big money showdown with Mr. Money himself, Floyd Mayweather. For Brook, a U.K. showdown with Amir Khan could hang in the balance, as well as the simple fact that this could be his only shot at winning the world title.