Shawn Porter was simply awful in his failed title defense against the UK’s Kell Brook Saturday night. Flailing his arms in vain like an agitated turtle turned upside down, he smothered his 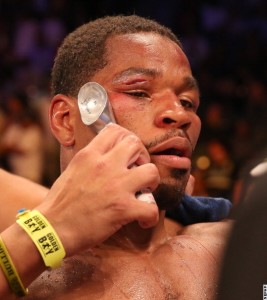 own punches whenever close enough to do any damage to his underdog challenger.

He looked extra awful because of the high expectations placed on him after April’s four-round demolition of the usually durable Paulie Malignaggi.

In sending Malignaggi to the hospital, Porter found himself jettisoned up to the top of the list of “next American superstars.” And like most fighters who make it to that list these days, he found himself quickly ousted.

Similar to Seth Mitchell and Adrien Broner before him, Porter’s reputation turned out to be greater than his reality. And, also like Mitchell and Broner, he would find himself beaten soundly by an opponent he was heavily favored to not only beat, but humiliate.

Moments after the decision was read at the StubHub Center in Carson, California, Porter was baffled by what he had just heard.

“I don’t get that,” Porter could be heard telling his father and trainer, Kenny Porter while Brook and his team were in mid-ring celebration.

If Porter truly can’t understand why he lost that fight, then he needs some very basic remedial lessons in what constitutes an effective fight strategy and main stage boxing execution.

Brook-Porter was a tough fight to score, mostly because of Porter’s awkward mauling and the rampant holding that anti-style inevitably generates.

A proponent of the high-tech, fancy-pants conditioning regimens being peddled by convicted PEDs distributor, Victor Conte, Porter has looked like an Adonis in recent fights, but has not added a bit of technical or tactical nuance to his game since avenging his 2012 draw with decrepit Julio Diaz with a unanimous decision over a slightly more decrepit Diaz in 2013.

By all accounts, Porter is a good guy and a dedicated professional in his training, but it’s painfully obvious that he needs less time with the hypoxicator mask, fewer naps in Conte’s hyperbaric chamber and more time learning some very basic fundamental boxing.

Like several other high-end American fighters, Porter is a wonderful athlete and exhibits a fighter’s will to win, but is sorely lacking in actual skill.

An incredulous Porter Saturday night actually believed that he had done everything necessary to win. Bull rush his way inside, flail arms wildly, fall into an awkward embrace, repeat– over and over again. To an extent, and with varying degrees of ability, this has been a successful formula for guys like Timothy Bradley, Andre Berto, Devon Alexander, and a few other high-profile American fighters.

Fighters who can’t fight on the inside don’t make for very entertaining bouts, yet more and more American fighters are reaching the top of the game as incomplete products.

There are many reasons for boxing’s diminished role in the minds of the mainstream sports fan, but not the least of them is the fact that very few American fighters these days are producing fights worth watching.

Only a true die hard fan would sit through a fight like Porter-Brook last Saturday night. A casual fan or one merely curious about the sport at its alleged highest level, would be reaching for the remote control after three rounds of that mauling mess. Imagine the Indianapolis 500 confined to one small lot where none of the cars have enough space to pull out of their parking spots. Awful.

This less-than-entertaining product goes hand in hand with the fact that a lot of these guys have failed to learn very basic inside fighting skills. As Bernard Hopkins recently said, “Boxing now is 99% trainers and 1% or less teachers…We lost the teachers.”

And this even affects those fighters who have mastered the art of prizefighting. Genius-level tacticians like Hopkins and Floyd Mayweather can break records and coast at 65% because they’re befuddling their opposition– the top 10% of their profession– with simple footwork and basic old school technique. This also makes for less-than-scintillating viewing.

Guys like Emanuel Steward and Eddie Futch are no more and the new crop of trainers seem more like well-paid baby sitters or fitness consultants than actual trainers in the historical boxing sense.

This isn’t a uniquely American concern, but it has become painfully evident during this last generation of fighter that the American is in decline. It’s not necessarily because foreign fighters, as a whole, are all that much better than before, although many Eastern European fighters have incorporated classic “American” training philosophies to their game to add some flexibility and improvisational skills to their usual straight up and down style.

No, America is losing ground on the world because many of our top-ranked fighters are no longer complete fighters with the kinds of skills real “boxing people” would expect from elite-level boxers.

There’s really no answer to this downward trend. It’s obvious why guys like Mayweather and Hopkins and Andre Ward (when he’s not suing a Goosen) are reaping such great in-ring rewards. Today’s young fighters and their people are merely choosing to overlook the real keys to success and longevity in the hope that science and supplements can fill the gaps.

But there’s a reason the greats of other eras spent a lifetime cultivating their skills– it’s because the details learned in the gym and perfected in combat work really, really well.

Unless there’s some sort of drastic, dramatic change, expect boxing’s American base to continue to grow weak as a long succession of “next big things” burn brightly for one or two fights, only to collapse under the weight of their own hype.

You can email Paul at paulmagno@theboxingtribune.com or do like his stalkers and rip off his ideas to the wild acclaim of others.  And if you’re feeling charitable,  buy his book: Notes from the Boxing Underground. Paul is a full member of the Burger King Kids’ Club, a born iconoclast, and an ordained minister in the Universal Life Church.