On a slow news week, a story like the latest flare-up between 50 Cent and former bestie Floyd Mayweather becomes an actual big deal. 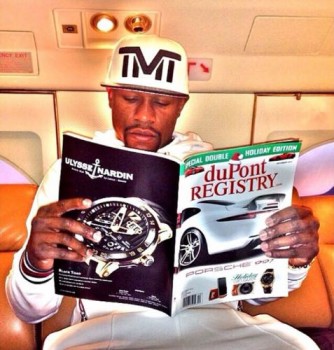 For those few that may not know, “Fiddy” issued a video challenge to Mayweather on Thursday in the spirit of the ALS Ice Bucket Challenge– $750K to the charity of Mayweather’s choice if the champ could read one page of a Harry Potter book without stopping, stalling, and otherwise fucking up.

The rapper would later release another video, making a concession and offering to allow Mayweather to read “Cat in the Hat” instead of Harry Potter.

Soon, the internet memes came out and, as things sometimes do on the internet, the gag took on a life of its own.

Radio host Charlamagne of popular morning show, The Breakfast Club, would release outtakes of Mayweather struggling to read a written promo handed to him when he last visited the show.

Everyone had a good chuckle.

Then some began laughing too hard…and it stopped being funny.

Boxing bloggers, usually about as unanimously liberal as a Berkeley, CA  Whole Foods checkout lane, lit up social media with snide remarks and promoted their cute articles about Mayweather being a dummy. And, as has been the case since Mayweather stopped having Bob Arum carry his sacks of cash for him, the purpose was really to just knock Mayweather off his pedestal.

Mayweather flaunts his money, flaunts his lifestyle. He treats most media with derision and seems not to care one single bit about the social mores of the time. Accuse the man of serial misogyny? The next day he’ll release a video of himself being bathed like a king by a sexy bikini girl. Talk about the money he wastes? The next day you’ll see a video of him tooling around in yet another big-ticket sports car.

Mayweather’s act is nothing new in the world of professional boxing and, sadly, not all the sickeningly PC posturing of a now ultra-metrosexual media can hide the fact that not much has really changed within the hearts and minds of the media through the years.

Back in the days of first black heavyweight champion, Jack Johnson, the elitist white media burned bright to “get” Johnson because he flaunted his money and lifestyle in the face of men who believed themselves to be inherently superior.

One hundred years later, the media still mostly consists of upper middle class men who angrily pursue the “uppity” types and enjoy laughing at the humbling image of the big, dumb black guy way too much.

Like Robert DeNiro’s “laughing in the theater” scene in Cape Fear, laughing too hard at a pretty weak joke can be truly disturbing.

The End is the Beginning

On Monday, September 1 The Boxing Tribune that you’ve come to know and (hopefully) love, will be no more.

In its place will be a new full-service Boxing Tribune aimed at the mainstream audience, but carrying with it the same hard-hitting, independent edge you’ve come to expect from the old site.

Five years ago, we began The Boxing Tribune with the following words:

No holds will be barred and I guarantee that toes will be stepped on and feelings may be hurt…but the truth is our primary goal.

Well, we certainly delivered on our promise and, in the span of five years, managed to introduce a new concept into this sport’s media– fair and independent coverage. Along the way, we made many enemies among the establishment voices and have been threatened, attacked, and ultimately blacklisted from the mainstream of boxing media discourse. On the other hand, however, we’ve made many, many friends who share our ideas and ideals. Fans, immediately receptive to the idea of a new media presence in boxing’s boy’s club, discovered us despite the blacklist and have demanded for us to deliver more to them. And, finally, we’re able to deliver.

The dirty secret about the boxing media is that much of it is owned and/or funded by boxing promoters, who definitely have a vested interest in presenting news coverage that is more advertising than actual journalism.

Major sites run deep in the red, hemorrhaging money, but still in business because someone with pull in the boxing industry is actually writing off the site’s expenses as advertising expenses.

Even some of the boxing media’s biggest names are really little more than marketing tools for the sport’s power brokers.

With this business model, is it any wonder why the sporting world’s most out-of-control corrupt sport has the weakest, most pandering media?

For those of us not running on a budget culled from the expense account of industry insiders, money is always an issue. Despite the growth of our site, our earnings have not budged much at all– and certainly not enough to fairly compensate staff, cover expenses, and put aside budget for bigger, more costly investigative pieces that take time to put together.

Unlike many who open sites and blogs, I never intended this project to be a hobby or cool side gig that occasionally gets me some free tickets to shows. Simply put, I would not treat The Boxing Tribune as a permanent part-time gig. My aspirations have always been greater than that. But, yeah, money is important.

Earlier this year we were faced with making the huge decision of closing up shop for good or doubling down on our efforts to prove that a truly independent boxing media outlet will be a hit with the mainstream boxing fan. We decided on the latter.

Our September 1 relaunch will not only debut an entirely new look and layout for the site, but it will also debut our efforts as a full-service and comprehensive boxing news site with updates around the clock.

We hope to become a trusted and reliable source for news coverage as well as a home for the sport’s best editorial pieces. Readers will also enjoy all of the bells and whistles they’ve come to expect from similar mainstream sites.

To relaunch in a big way, throughout September we’ll be featuring guest columnists who have chosen to show their support for our cause by contributing original pieces of work. Some are ex-staffers, others merely writer friends of the site. We’ll also feature a couple of celebrity guest columnists thrown in for good measure. What they all have in common is full support of the idea of an independent boxing media as well as a respect for what we’ve been trying to do here. Let it also be known that each and every one came aboard for our relaunch without the slightest bit of hesitation.

Please come in and check us out. Spread the word if you support the idea of a media not run by those already ruining the sport. Share our articles with friends and fellow fight fans. Also, pardon our dust a bit as there are bound to be some tech hiccups in our first few days.

Thanks for supporting us in our first five years. Thanks in advance for pushing us to that next level.

You can email Paul at paulmagno@theboxingtribune.com or watch as he enters into his sixth straight year of outraging boxing nerds everywhere. You can also buy his book, Notes from the Boxing Underground! Paul is a full member of the Burger King Kids’ Club, a born iconoclast, and an ordained minister in the Universal Life Church.