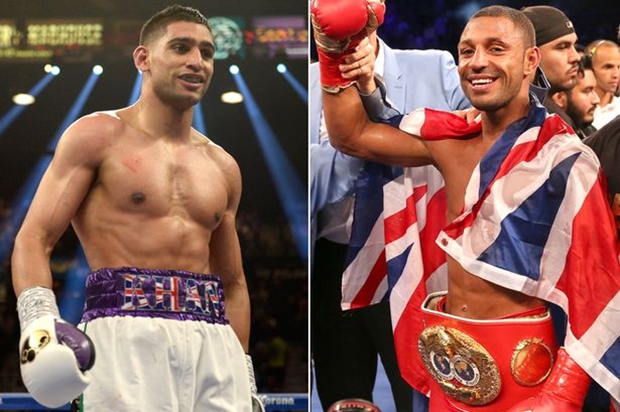 During the 36 minutes that a boxer can spend inside the ring exposed to the incoming blows of his opponent, it must surely be the most individual of endeavours despite the close proximity of cornermen and the thousands of fans who surround the squared circle cheering, heckling, baying for violence.

Yet despite that isolation that a boxer must experience as he goes mano a mano (not to ignore their female counterparts to endure similar conditions in their bid for ultimate glory) the sport is very much a tribal affair.

Think back to ancient times when villages would pit their finest warriors against each other for sport or for rights and titles. Consider also how in some communities, families settle their differences with a spot of hand to hand, Tyson Fury could perhaps talk about this in depth.

And so, after a few years of ‘maybe’ and ‘what if’, the UK appears to be drawing nearer to a humdinger of a grudge match, one that may even top the natural animosity that Froch v Groves 2 mustered. And one with a real sense of tribalism that’ll get the fans backing their man based on regionality AND personality.

Yorkshireman Brook has lived in Lancastrian Khan’s shadow for the past 5 years despite some fan’s belief that the Sheffield born Special One’s abilities were far superior to his flash-fisted Bolton rival. Khan, of course, was catapulted to self-proclaimed super-stardom following his 140lb title win against Andriy Kotelnik and unification triumph against Zab Judah with keynote wins over Marcos Maidana and Paulie Malignaggi in between.

Since that highpoint, however, it hasn’t been easy going for Khan either inside the ring or out. Losses to Lamont Peterson, marred by Peterson’s positive steroid test, and Danny Garcia where Garcia caught Khan flush under the ear and rendered the Brit utterly devoid of his senses in the subsequent crucial seconds, were followed up by shaky outings against lesser-regarded foes in Carlos Molina and Julio Diaz. The latter fight was another life or death affair for Khan and his propensity to get into wars that neither his skill warrants nor his chin looks like it can withstand, at times, gives Khan’s fans and haters alike the reasons they need to follow or berate him.

And Khan’s popularity, especially in Britain has nosedived since his heroics against Maidana in December 2010 to such an extent that he is now widely reviled by all but a hard-core of followers. As a newly-graduated professional with his 2004 Olympic silver medal still swinging around his neck he gained a reputation for being as fast in his procession of BMW’s and Mercedes Benz’s as he was inside the ring and the inevitable crash came at the infamous and seemingly never to be forgotten 70-second rinsing at the hands of Columbian swinger, Breidis Prescott.

With a seeming newfound dedication to his craft, Khan rebuilt and went on to capture 140lb honours, but with each fight came a growing air of inflated self-belief, a growing army of hangers-on and the sense that Khan himself was more about the stardom and the bling than the love of the game. Calling out Floyd Mayweather from 2011 onward and pronouncing that he was giving his former training partner Manny Pacquiao fits in sparring, the tide of popular support for Khan began to turn against him and he once declared that he was not going to return to fight in the UK because he did not feel properly appreciated. Even going so far as to accuse British fight fans of racism and claiming that had he not been of Pakistani descent he would have been more popular than he was. The claim was even repeated in respect of his brother Haroon who found himself dropped from the British amateur squad at one time, though the team coaches held that it was Haroon’s boxing ability and not his race, colour or creed that saw him relegated from the squad. Only Haroon’s pro career will prove or disprove that assessment in time.

So, while Khan enjoyed the limelight, the slightly older and slightly more experience Brook was paying his dues in the division above Khan at 147lb but there was evidence that Brook had potential and his installation as the mandatory challenger for Manny Pacquiao’s WBO belt as far back as 2011, was flattering, but a little premature– and Brook probably knew it.

But Brook, who was training at the Ingle gym, the team responsible for bringing the world Naseem Hamed, had time on his side. What he didn’t have, it seemed, was the right promoter and after an acrimonious split from Frank Warren, who subsequently claimed the Brook lacked the heart and appetite for the world level, Brook found his way to the Matchroom stable and to Eddie Hearn who was proving himself capable at developing fighters’ confidence and getting them in the right fights at the right time. With Carl Froch, Darren Barker (Eddie’s original original) and Tony Bellew at Matchroom, Brook began to refocus himself and barring a blip in his first fight with Carson Jones and some injury nightmares in the accursed challenge to Devon Alexander’s IBF belt, Brook managed to hold his mandatory position and in August 2014 fulfilled his potential and his dreams by dominating Alexander’s conqueror and Golden Boy/Haymon hot prospect, Shawn Porter.

In doing so, Brook silenced a growing army of critics from his home nation who had become wearisome of his injury crises and non-apparent world level credentials. And in accomplishing the rare feat of travelling to the states and beating an undefeated US world champion on the judges’ cards, Brook has really regained a huge amount of popularity with the British fight fan community.

And so having chased Khan for a fight when Khan had belts, and even when he didn’t, Brook now holds some cards of his own and has at least got Khan’s attention as was demonstrated in the post-fight ringside interview when Brook called Khan out from his commentary position in the TV studio and promised his long-time rival that he was ‘getting it next’.

Over 500 years ago, the British throne was fought over by supporters of two rival contenders for the lineage. One from Yorkshire and one from Lancashire. It was Henry Tudor, the Lancastrian, who succeeded in the original War of the Roses but in this modern day reprisal one suspects that the Yorkshireman, Brook, may have the edge in boxing ability. He’ll certainly enter any ring with a considerable advantage in popular support I suspect. But once they approach the middle of the ring, it won’t matter who is popular and who isn’t. Or how many tens of thousands will pay to attend and cheer, heckle and bay for blood and knockouts. It’ll just be the two of them.

Whenever it happens. It’ll be War of the Roses. The Battle of Britain. And maybe for the right to bring Floyd Mayweather over for his Showtime contract finale 49-0 challenge.

May the best man win!

A fan first and foremost, Ben Randall is as interested in the politics and behind the scenes goings on aka ‘the bullshit’ as the tales of humanity, triumph and despair seen in the ring aka ‘the truth’. Never afraid to speak his mind and holding fast to his Twitter ‘ego’ @BoxingBenZilla. Opinions with teeth. And sometimes bad breath’