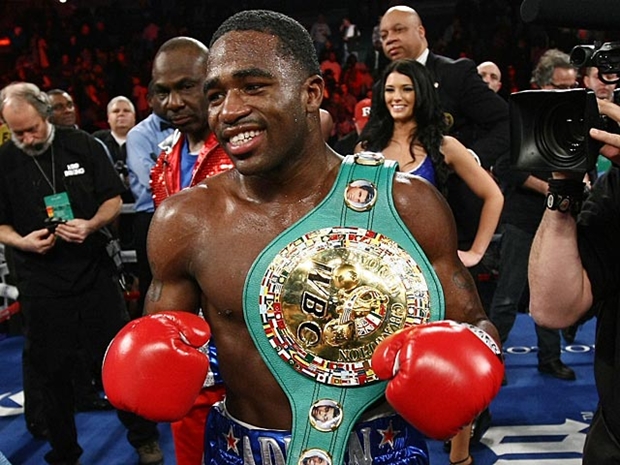 Ahead of his September 6 fight with Emmanuel Taylor, Adrien Broner is starting to sing a whole new tune.

The former three-division world champion has been in a rebuilding phase since being beaten up and humiliated against Marcos Maidana last December, and up to this point, it wasn’t looking like he was making a lot of progress. The brash and usually foul-mouthed former champion failed to impress the boxing community with a ho-hum win over “Not That One” Carlos Molina last May, and to make matters worse, it is starting to seem that Broner’s shtick was beginning to get a bit worn out.

That shtick of course, was basically being the equivalent of a parrot to Floyd Mayweather. Broner had been marketed as a mini Mayweather because he held his hands in the same modified shell stance and people thought he was an asshole every time he opened his mouth. His dominance of the lower weight classes displayed his prodigious talent, but it was far often overshadowed by his moments of pure idiocy outside of the ring.

Examples of his ill-advised behaviors includes a reprehensible act where he gave oral sex to a stripper and an even more disgusting act of using a bathroom at Popeye’s while flushing $20 bills down the toilet, as well as making a sex tape that he probably leaked himself to WorldStarHipHop.

The Taylor fight is one of the last stops in Broner’s rebuilding tour now that a big time fight with Lucas Matthysse is on the horizon. While many would have expected more of his outbursts, he has pleasantly disappointed the sport and maybe…just maybe…has shown signs that his identity crisis is over.

Where there was cocksure swagger and brashness, determination and maturity now seem to dominate. Broner has told anyone who has asked him that his top priority is winning a title at 140 pounds and has stressed that he must put in an impressive performance against Taylor before anything else materializes.

The mental adjustment is just one adjustment that looks like it is being made, the other one we’ll see on Saturday night against Taylor will be a better determinate of how far he has come since the Maidana calamity.

Broner is not a defensively sound fighter and throws far too few punches, instead waiting to land a big counter shot to stunt his opponent’s offense. It didn’t work against Maidana and wasn’t really working too well against Molina, either. The quickest solution to Broner’s in-ring issues is as simple as just throwing more punches and taking the fight to his opponent.

Taylor isn’t the kind of foe who is perceived as a threat to Broner, which is one of the reasons the fight card has been derided by the public and boxing press, but he is no pushover. Though he has graduated from the prospect level, he has fallen twice to the likes of Prenice Brewer and Chris Algieri, but is coming off of a career best win over Karim Mayfield in July.

If Broner isn’t prepared, Taylor is more than ready to seize what could be his last chance to make it to the class he has failed to move up to.

Broner is looking to put the 140 division on notice, and Taylor is the last obstacle to overcome to determine how serious that notice will be.

The boxing world might just be ready to meet the real Adrien Broner, and if all goes well, he may truly materialize as a “Problem” for years to come.

Danny Howard is a lifelong boxing fan and has had his works featured on FightHype and the Yahoo Contributor Network. He currently maintains his weekly boxing blog, The Spit Bucket, and is the author of “And Stay Down! Boxing’s Worst Comebacks.” Howard can be reached by email at daniel.howard6@att.net or you can follow the weekly additions at http://dannybhoward.wordpress.com