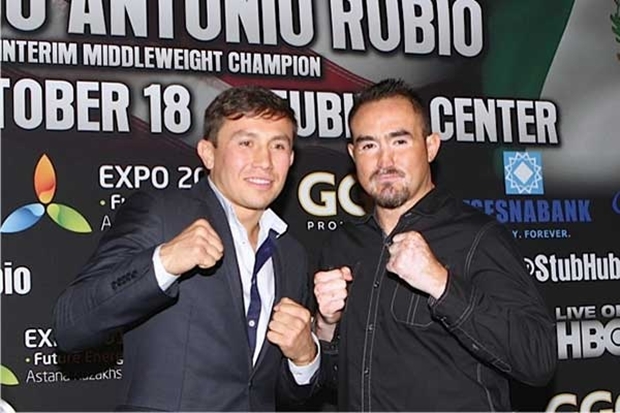 Back before WBC middleweight champ Sergio Martinez was signed to face Miguel Cotto, Rubio was supposed to be next in line. Even after winning the organization’s laughable interim title against Italy’s Domenico Spada, Rubio was no closer to the prize despite, obviously, being lead to believe otherwise.

After Cotto shocked the world and stopped Martinez to take the title last June, there was reason to believe that Rubio’s title shot would now be guaranteed. The WBC began to clear its throat publicly and hint at Cotto-Rubio.

Then, just a couple of weeks ago, WBA middleweight champ Gennady Golovkin swooped down from above and laid claim to Rubio.

In and of itself, it wasn’t an odd move for Golovkin to take on the challenge of the Mexican blue collar battler. Rubio is as credible as just about anyone else on Golovkin’s rather thin resume and as a “stay busy” fight between bigger bouts, it’s a pretty respectable choice.

But why would Rubio give up a bigger payday and a more realistic chance at victory against Cotto in order to face a raging machine of an opponent, seemingly tailor-made to tear him to shreds?

Rubio and his team insist that Cotto simply didn’t want the fight. Reading between the lines, that also shows how little power the WBC chooses to exercise when faced with a stubborn revenue-generator as a champion. Rubio, after all, has been the mandatory challenger for the better part of a year and was guaranteed his shot if he would just step aside and allow Martinez-Cotto.

So, while Cotto gets to calmly weigh his options, Rubio would be forced to either cool his heels and wait or take a couple of short-money bouts while waiting. Instead, Team Golovkin offered him a title shot, a spot on HBO, and, likely, a very generous cut of the purse. Golovkin’s previous opponent, Daniel Geale received an exceedingly generous purse split of nearly 45% to walk away with $600,000 after his TKO 3 loss to the undefeated champ. No purse numbers have been revealed yet for Golovkin-Rubio, but when they are, expect Rubio to be paid well over his market value.

But that still doesn’t really explain Golovkin-Rubio, scheduled to take place October 18 at the StubHub Center in Carson, CA.

By removing the mandatory from Cotto’s future, Golovkin is essentially creating a scenario where Cotto will have no choice but to fight him or symbolically pass the torch by passing on a face to face confrontation. The most likely option is that Cotto will opt not to face his WBA counterpart because a Golovkin bout would likely present a modest payday for an extremely ugly mismatch and possible career-killer for the Puerto Rican titlist.

The WBC is aiding this strategy by allowing Rubio to put up his interim belt against Golovkin in a kinda, sorta unification and by declaring that Cotto must face the winner of Golovkin-Rubio. But this, of course, allows Cotto the chance to have one voluntary defense in the meantime and hand over another 3% sanctioning fee to the Mexico City-based outfit.

Post Golovkin-Rubio, Cotto becomes little more than a name in a book and depending on what the WBC decides to do, it’s likely that Golovkin will be wearing the WBC belt by the end of this year.

Unfortunately, for a fighter like Golovkin, whose ability far exceeds his ability to generate revenue, these are the baby steps needed to reach the next level. With two alphabet belts in his possession and an indisputable claim to being the very best at middleweight, Golovkin will be just that much closer to reaching that next level of stardom reserved for the true elite main stage draws—passing of torch or not.