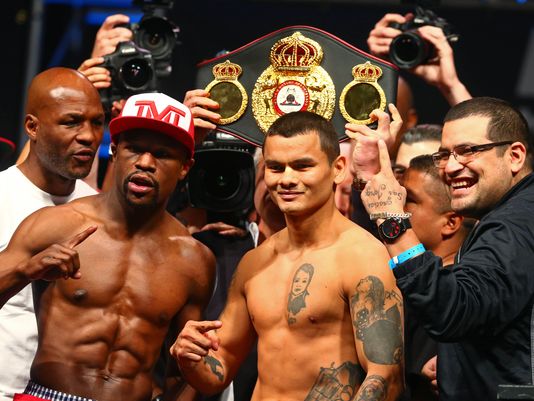 Mayweather-Maidana Fight Week is upon us and all the good media lemmings will take a break from posting Pacquiao-Algieri photo-ops as front page news stories in order to run photo-ops of Mayweather with sports cars and Maidana looking tough.

But even to the most click-conscious editor and SEO-juicing blogger, it has to be getting harder and harder to drum up interest for events that just aren’t all that interesting. And to call the Mayweather-Maidana 2 card “not all that interesting” would be a really, really kind assessment.

Advisor/Manager/Faux-promoter/Bogeyman, Al Haymon takes a lot of hits in the media, some deserved and some just because he’s not one of the “old boys” who divvy up the loot, screw the fighters whenever possible, and (pretty much literally) own the boxing media. However, what appears to be true about the man is that he absolutely can not put together a boxing show.

The last couple of months has shown us what a boxing under Haymon world may look like– and it hasn’t been a pretty sight.

By all accounts, Haymon has been getting his way in terms of matchmaking, while Golden Boy owner, Oscar De la Hoya, under whose promotional banner these fights are currently being staged, has detached himself emotionally from these shows in favor of bouts with fighters actually signed to Golden Boy contracts. And with go-between, Richard Schaefer  no longer around to inject some measure of common sense into the Team Haymon matchmaking, recent cards have become full of showcase squashes and preludes to nothing.

And that brings us to this upcoming Mayhem suck hole of a card, which, following the recent news of a lawsuit filed against Mayweather by his ex-fiancé could be retitled: The Fight to Pay Ms. Jackson.

At this point, it’s a cliché to complain about crappy undercards and the high price tag of main events that don’t warrant the PPV treatment, but this one is an especially cynical grab at your wallet.

On the undercard, two legitimately compelling fighters– Leo Santa Cruz and Alfredo Angulo– are featured in squashes against fattened-up no-hopers. Miguel Vazquez, the light-hitting IBF lightweight titlist, will defend his title against The Money Team’s Mickey Bey, who somehow parlayed a PED bust and KO loss to John Molina into a world title fight. The only truly interesting bout on the entire undercard is Bey conqueror, Molina vs. Humberto Soto, which will be shown on Showtime’s “free” Countdown Live pre-card show– and even that one has the potential to be a blowout in favor of the younger, bigger, stronger Molina.

The main event of Mayhem is something we’re getting used to when it comes to “cash cows” Mayweather and Pacquiao– a styles mismatch that counts on publicity, twisted logic, and a fan’s natural optimism in order to give the impression of competitiveness.

In this particular case, the logic for booking the Mayweather-Maidana rematch was that Maidana didn’t fall into a Mayweather-induced coma like most of his opponents do and actually fought for a full twelve rounds, keeping things relatively close (or, at least, close enough).

Forget the fact that the “close” fight was likely caused by the half-efforts of a jaded Mayweather last May, who fought the first half of the bout like he was going to be six points up, no matter what.

Mayweather will likely approach the rematch more seriously, meaning more movement and more defense with the end result being a virtuoso snoozer by the ninth round.

The only real intrigue of the evening– despite what is sure to be an honest, earnest effort from Maidana– is whether Golden Boy and the great unspoken boxing zeitgeist feel that Mayweather has outlived his usefulness as the main stage star.

If the winds (and whims) of change are against Mayweather, we may see a bout where Mayweather is not getting the benefit of any doubt when it comes to officiating or judging. But, even then, there’s no reason to believe that “Money” will come close to defeat.

Regardless of any spin to the contrary, a night of foregone conclusions awaits for those eager to purchase Mayhem– and that was obviously the central thought behind the entire event. Low risk, high reward, and it all stays in the family, anyway. In the two principle title fights, Haymon controls both challenger and champ. In the squashes, Haymon owns the favorites and would probably be quick to sign the underdogs if the upset somehow happened. Win-win for Haymon and his inner circle; lose-lose for the consumer.

So, as instructed by our trusted media, cough up that $65-$75 and support your sport; Support it despite the fact that it hasn’t done a whole lot to justify your loyalty lately.

I just wanted to offer a quick thanks to our readers, who made the week of our relaunch the biggest week, by far, in the history of The Boxing Tribune. We plan on keeping this up and growing even more in future weeks. Stick with us for several more guest columns from writers dedicated to our goal of creating a truly independent media.

Of course, our efforts have not gone unnoticed by the mainstream boxing media and, as expected, yours truly and the Tribune staff have taken some public shots, one specifically from a member in good standing of the Boxing Writers Association of America (BWAA), who took to social media, called me a silly, childish name and addressed our efforts as “more penny-click shit from a talentless hobbyist and his crew of BWAA rejectees.”

You can email Paul at paulmagno@theboxingtribune.com or watch as FULL members of the BWAA cyberstalk his every move.  Oh yeah, and  buy his book: Notes from the Boxing Underground! Paul is a full member of the Burger King Kids’ Club, a born iconoclast, and an ordained minister in the Universal Life Church.