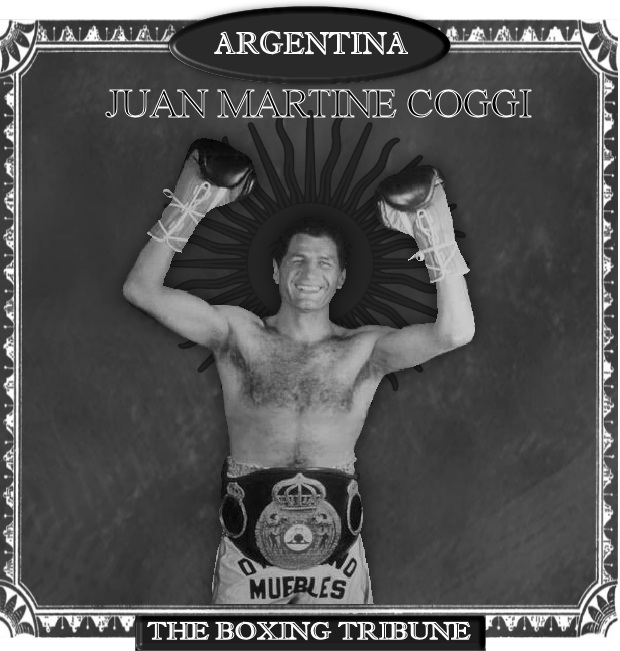 Juan Martin Coggi was a talented box-fighter who made good use of his southpaw stance. Coggi could box or brawl, and was involved in a number of exciting wars during his career.

Coggi won the WBA world light welterweight title on July 4, 1987, when he scored an explosive 3rd round knockout over Patrizio Oliva. Coggi defended the title successfully four times, before being out-pointed by Frenchman Loreto Garza in France, on August 17, 1990. Not one to be daunted by the setback of defeat, Coggi built up a thirteen fight winning streak, and then on January 12, 1993, he overpowered Morris East in 8 rounds, to regain the WBA world lightwelterweight championship.

Coggi’s second world title reign lasted 20 months and seven defences, until Coggi was out-pointed on September 17, 1994, by Frankie Randall. Sixteen months later, Coggi won the WBA title for the third time when he out-pointed Randall on a 5th round technical decision, after the fight was stopped early; Coggi being unable to continue due to a head clash. Seven months after, controversially regaining the WBA championship, Coggi faced Randall for the third time and was out-pointed again after another hard fought fight.

An ex-world champion once more, Coggi had six more contests, winning five, then being out-pointed by Michele Piccirillo, in a fight for the WBU world welterweight championship on May 29, 1999.

Prev5 of 11Next
Use your ← → (arrow) keys to browse
Peter Silkov