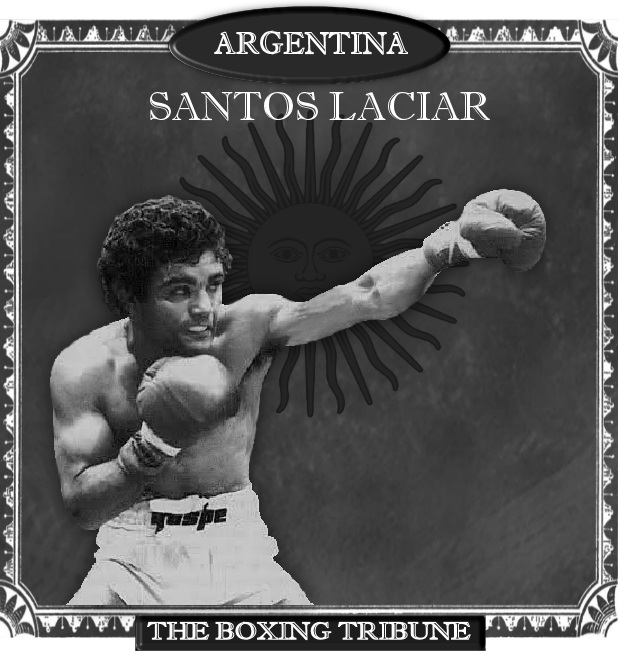 Santos Laciar was a little sawn-off ironman, who encapsulated many of the typical characteristics of the top Argentine fighters, that being both a strong offensive fighter, but also able to box with good technique when the occasion demanded it. Laciar was a formidable box-fighter, who fought the best that the flyweight division had to offer throughout the 1980s. After turning professional in 1976, Laciar soon proved himself a force to be reckoned with in the flyweight division.

On March 28, 1981, Laciar stopped Pete Mathebula in the 7th round to win the WBA world flyweight championship, only to lose it in his first defence when he was out- pointed by Luis Ibarra, 3 months later. However, Laciar was just beginning his time as a world class fighter, and on May 1,1982, he regained the WBA world flyweight title when he stopped Juan Herrera in the 13th round. Laciar proved himself to be a worthy world champion by defending his WBA championship nine times over the next three years, winning them all, and defeating fighters such as Shuichi Hozumi, Prudencio Cardona, Hilario Zapata and Antoine Montero.

Laciar’s reign lasted just three months, when he was dethroned by Sugar Baby Rojas on points. Laciar continued to operate at the top level for the next three years, and on September 12, 1989, he tried to regain the WBC super-flyweight title from old foe Gilberto Roman, only to be beaten on points. After this contest, Laciar fought three more times, before retiring in 1990, with a final record of (79-10-11, 31 KOs.)

Prev6 of 11Next
Use your ← → (arrow) keys to browse
Peter Silkov