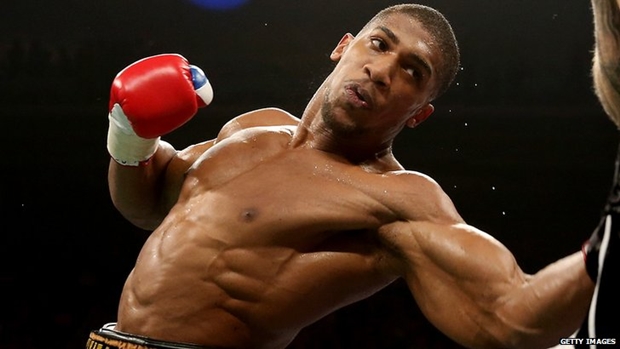 With August complete and all the fights recorded and reported, Anthony Joshua is our prospect of the month.

Joshua won the gold medal in the Super Heavyweight division at 2012 Olympic Games in London, England.

As a pro he’s complied a 8-0 record with 8 KO’s. In his most recent bout, this past Saturday, September 13 he stopped Konstantin Airich in three rounds. Prior to that, he stopped former Commonwealth and European heavyweight champ, Matt Skelton in the second round.

On October 11, Joshua is scheduled to fight for the WBC International Heavyweight title. His opponent is Denis Bakhtov (38-9, 25 KOs).

The biggest accomplishment of his young career will be, if all goes according to plan, winning a title within a year of turning pro.

Joshua, who is promoted by Eddie Hearn of Matchroom Sports, was serving as a sparring partner for heavyweight champ Wladimir Klitchsko prior to the injury that recently postponed Klitschko’s defense against Kubrat Pulev.

When searching for and choosing Prospect of the Month, 5 basic guidelines are followed:

1. Fighter cannot be ranked in the top 10 in any of the 4 major sanctioning bodies

2. Fighter cannot claim a major title in any of the major sanctioning bodies, including regional or continental titles.

3. Fighter must have what can be considered, a significant win

4. Fighter has to have at least been scheduled for an 8-round bout

5. Fighter has to have been active within the last 2 months.