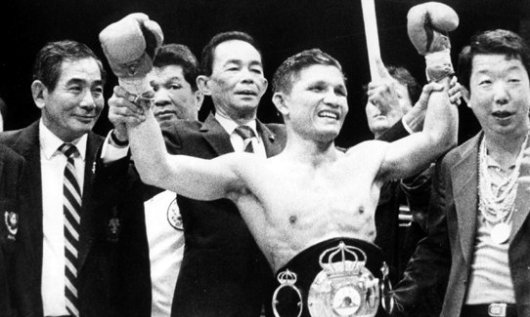 Others who had a knack for ending matters decisively were Carlos Zarate, Wilfredo Gomez, Thomas Hearns, Marvelous Marvin Hagler, and Pipino Cuevas. Their victims (especially Pipino’s) often paid dearly from the ferocity of their power. Broken noses, broken eye sockets and broken jaws sometimes resulted when these closers finished their work. However, for sheer finality, few could match the great Thai champion, Sura Saenkham who, following a Thai custom of adopting an attention-getting pseudonym became known as Khaosai Galaxy.

Now I dearly love Thailand. I love everything about it (except the urban traffic jams); I love the marvelous food, the beaches, the culture, the wonderful people, everything. And I dearly love the entire experience of watching boxing in Thailand. In Bangkok, boxing can be the linchpin that connects many other pleasant activities

First, one can enjoy a relaxing steam bath and rubdown to relieve the stress of the business day. Then dinner, maybe steamed Thai dumplings and giant prawns, spicy Viet Nam noodle soup with pork, ice cold Thai beer and then some green bean rice pudding for dessert with Thai iced tea.

After dinner, one can hop a taxi to the fights at Rajadamnern Stadium in Bangkok. The nights are hot and steamy. High –pitched reed music plays in the background, and drums and staccato cheers sound every time a heavy punch lands. The sounds are surreal..

But Back to Galaxy

When Galaxy hurt his foe, he moved in quickly for the kill and the crowd would go absolutely wild. In one fight I witnessed in 1990, he iced Cobra Ari Blanca in the fifth round. I also saw him starch a Panamanian named Ernesto Ford in Petchaboon later that same year.

Aside from his loss to Sakda Sak Galaxy Saksuree (9-9) for the Thai Bantamweight Title in 1981, which he quickly avenged by brutal KO, Galaxy never took part in what could be called a close fight.

When reigning WBA junior bantam king Jiro Watanabe failed to defend the title against Galaxy, the belt was declared vacant. On November 21, 1984, Galaxy won the vacant WBA Super Bantamweight Title in 1984 by knocking out Eusebio Espinal in Bangkok. He would defend the title successfully 18 times– the longest title reign in his division’s history– though it transpired mostly under the radar in the West. No other Asian boxer had defended a world title for so long.

Sometimes called “The Thai Tyson,” Galaxy possessed embalming fluid in his fists. With a staggering KO percentage of 86%, he had one-punch knockout power. But, like a spider paralyzing its prey with a sting, he could stun an opponent with a single punch, setting him up for the end. When this happened, his fists and arms would be held high ready to cut loose. As he got close, he would impose his tremendous physique and the frenzied crowd would be up and roaring. He became the very essence of a stalking predator closing off the ring, making contact, and quickly accomplishing the kill with a variety of savage power shots thrown with uncanny accuracy and evil intent.

Khaosai was an equal opportunity kind of guy. He did his thing against Mexicans, Venezuelans, South Koreans, Colombians, Indonesians, Panamanians, Dominicans, Americans, fighters from the Philippines, warriors from Japan, and even Thais.

He won the WBA Boxer of the Year award both in 1989 and 1990. In 1999, he was elected to the International Boxing Hall of Fame. Thailand’s greatest boxer retired with a record of 49-1 with 43 KO’s and was acknowledged by many as the best 115-pounder in history as well as one of the greatest fighters from Asia. He remains an immensely popular figure in his native Thailand.