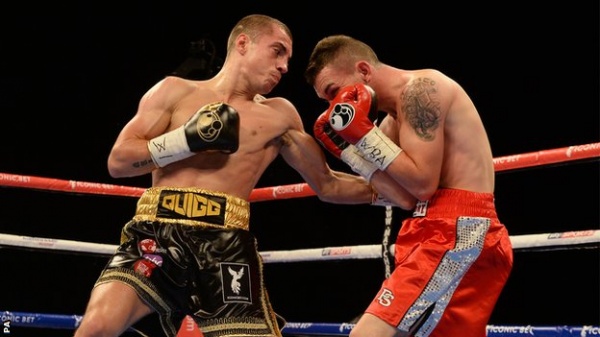 In a video interview posted on Seconds Out YouTube channel, Quigg stated “50/50 split down the middle, and that’s fair”. His rationale is that the match up isn’t a big one because of him or Frampton individually, but both of them together because they are two quality fighters who happen to be rivals.

Quigg has been a world title holder since winning the interim WBA belt in mid-2012. He went on to become a full world title holder in November of last year, stopping Diego Silva in two rounds. Saturday night he stopped Stephane Jamoye in the third frame to notch his fourth successful world title contest.

Belfast’s Carl Frampton fought one week prior to Quigg, winning the IBF title from Kiko Martinez in a one sided 12 round bout. Prior to becoming a world champion, he’s held the BBBofC Celtic, Commonwealth (British Empire), IBF Inter-continental, and EBU European title all as a super bantamweight.