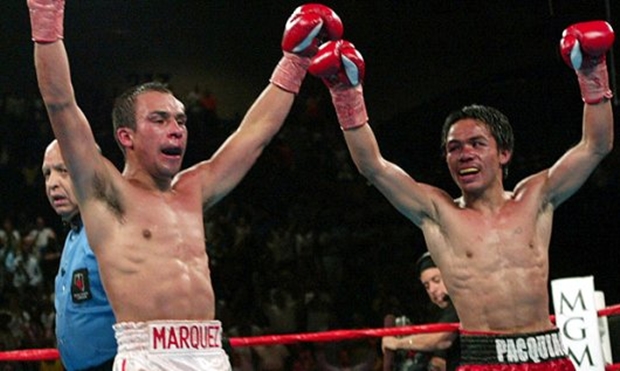 The only thing worse than a draw in boxing is a bad decision and sometimes you can get both in the same match. To watch twelve rounds of championship boxing and not determine a winner is such a deflating way to end fights, everyone feels cheated, fans and fighters alike. “A tie game is like kissing your sister” a quote that can be traced back to 1953 by Navy football coach Eddie Erdelatz after a scoreless tie against Duke, perfectly describes the let down.

As with everything else, boxing will be the very last to catch up. From drug testing to instant replay to ‘get it right,’ boxing is always behind the times. Each of the four major sports have done their part to try and do away with the draws and for good reason.

In MLB it’s ‘extra innings’ and they play until a winner has been determined. Just last month the Chicago Cubs played the longest game in franchise history, a sixteen inning marathon that lasted six hours and twenty seven minutes against the Colorado Rockies. Now I know some blood thirsty boxing fans would love to see a ‘fight til someone quits or gets KO’d’ type of ending. This is simply not a safe or realistic plan for eliminating draws in boxing.

It’s very much the same in the NBA where they play extra quarters until a winner has been determined. They make the quarters abbreviated at only five minutes each. Try to get a quick winner and get fans on the road. They will play as many of these quarters as it takes to have a winner when the time runs out. Championship fights were taken from fifteen rounds down to twelve in the name of safety (and fitting a championship fight into a one hour time slot for television, of course). Would adding an extra two or three rounds be a solution? Probably not.

In the NHL it’s always been ‘sudden death overtime’, first team to score wins. They even made it four on four rather than fives to open up the ice for scoring. If a winner has not been determined in the overtime period, they go to a ‘sudden death’ shoot out, where each team gets a few shots one on one with the goalie by players of the team’s choosing. Maybe we could let Freddie Roach and Robert Garcia take shots at one another to determine a winner? Although entertaining, simply not realistic.

The NFL has fooled around with their overtime rules and continue to tweak them for a winner’s sake, with fans to benefit as well. Originally, they played one more fifteen minute quarter. If nobody was able to get the lead the game was declared a tie. In the name of getting fans home they eventually went to what was called ‘sudden death’ overtime. The first team to score wins. In 2012 they tweaked that rule because it was determined that it ‘wasn’t fair’ that each team didn’t get a chance to score. Realistically it too was a let down after an intense four quarters on the grid iron. The team that won the coin toss usually drove down and kicked a long field goal for the win. Now both teams get a chance at scoring unless there is a touchdown and then it’s game over.

Right now ‘Buffalo Wild Wings’ has an entire advertising campaign based around a fictional set of circumstances and buttons and levers that allows fans to ‘get to watch’ overtime. But what if it wasn’t fiction at all, but reality in boxing?

The common theme to all of this is determining a winner. It should be even more so in boxing as it really creates problems that cannot be quickly fixed. On the elite level most boxers only perform two or three times a year at the most, a rematch for rectification simply takes too long. (Arum would say ‘It needs to marinate awhile’) These organizations understand how anticlimactic a tie ending is and they do whatever possible to determine a winner so fans don’t leave the game ‘unfulfilled’ by their sporting event. I believe we should do the same in boxing. I have an idea and a precedent to go with it.

I propose we have a ‘sudden death round’ in boxing to do away with the draws. Right now after the fight, the ring fills with ‘posses’, ‘dignitaries’, officials and such while the scorecards are being tallied and there is a pause for creating intense drama. As Charles Farrell put it so eloquently, the inflatable doll ring card girls are also brought out to fill up any free space in the ring not occupied by security, officials, or full-time hangers-on. The tension builds and then you hear it; “114-114, this bout has been declared a draw!”

Now the ring announcer says this with much enthusiasm but the boxing fans are far from enthusiastic. It’s a huge let down. And it’s even worse if it involves a poor decision, as in the ‘A’ side or hometown fighter looks to have been beaten by the underdog only to have victory snatched and a prospect’s ‘undefeated’ record preserved by the dreaded draw.

Let’s do away with the draw in boxing once and for all.

Take in this scenario. Two fighters have left it all in the ring. Both men deserve to have their hand raised and the cliché, ‘there are no losers in the this fight’ applies. But wait, we as fans actually DO want a loser, but more so a winner.

So here we go. The fight ends and the boxers go back to their respective corners and are immediately covered up in their robes to stay warm. Nobody enters the ring except the ring announcer. Corner men are on the apron, just the boxers staring across the ring at one another, waiting for fate to be determined. When he reads those scorecards and it’s a draw, the crowd goes absolutely crazy. There are wild cheers, some have even been chanting ‘Draw-Draw-Draw’ since the fight ended.

We have a sudden death round coming up to determine a winner once and for all. The rules would be simple, one round to determine the fight. Previous scorecards are a non factor and thrown out the window. Obviously a knockout ends it the same as in ‘regulation rounds’. Judges would be instructed that they are not allowed to score a sudden death round even. They must choose a winner.

Fans and the sport in general could benefit from this adjustment greatly. So much controversy could be avoided and fans well, they would be as enthusiastic as you could imagine. It’s a win win situation for all involved right?

Now, there is actually a precedent for this. Here in Colorado, many years ago, a local promoter, Jim ‘Smitty’ Smith had a stable of fighters he ’round robbin-ed’ if you will, on his club shows. The guys were pretty evenly matched and there were a couple of draws in a row. Smitty asked Colorado Boxing Commissioner Josef Mason, if they could add a stipulation to the contracts that if at the end of the six round bout it was scored a draw, they would fight a sudden death round. Mason came up with some protocol, keeping gloved up, getting robed up for staying warm and the cards being tallied very quickly so if there was an extra round, we get right to it.

So it has been done and Mason stated that as long as both parties agree to it, he had no problem with it and still doesn’t. This was the case between journeymen Brad ‘The Black Hawk Bleeder’ Jensen and Art ‘All Heart’ Medina back in 2004. They had a six rounder, ended in even scorecards, they fought an extra seventh round and Medina came away with a victory instead of moving sideways with a draw. To add to the drama, that round was scored a split, two judges for Medina and one for Jensen. The ring announcer builds it up; “Judge Ed Kugler scores the over time round for Jensen. Judge John Ulibarri scores it for Medina. And judge Novar Garcia scores it for your WINNER, by split decision in the OVER TIME round, Art ‘All Heart’ Medina!”

The crowd erupts in a frenzy. Some thought it should have went the other way, but, one thing for sure, nobody left the venue that afternoon with the let down of a draw.

Additionally, promoters are always looking for an angle for promoting fights. Would this not be a great marketing tool? Just rolls right off the tongue so nicely, ‘Sudden Death Round’.

I leave you with this. Can you imagine the difference a sudden death round would have made in the Pacquiao v Marquez I fight? It was an all out war of attrition and deserving of a winner. Many felt Marquez had pulled off an incredible comeback. Others thought Pacman did enough early to carry the fight. But neither was rewarded for their tremendous effort, the records moved sideways. And fans went home with disappointment for their boxing dollar. Not a fan that watched would disagree with an overtime round being needed, required even. Can you imagine the effort the boxers would put out, knowing they are winning or losing in three quick minutes?

And for me personally, being a huge fan of Tommy ‘The Motor City Cobra’ Hearns knowing he beat Sugar Ray Leonard in the rematch, an extra round would have been exactly what Hearns needed to settle the score.

So bang that drum fight fans, we as fans and the fighters making the sacrifices deserve the addition of a ‘Sudden Death Round’ for doing away with the dreaded draw in professional prize fighting!

I can hear Michael Buffer already; “Are you ready? I said ARE YOU READY, to RUMBLE for ONE MORE ROUND?”