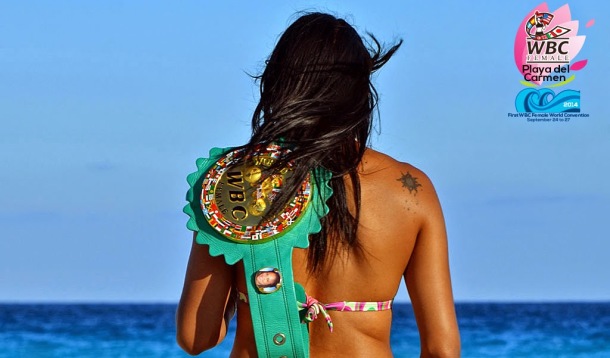 The Riviera Maya in Playa del Carmen, Quintana Roo, Mexico will host the first ever WBC women’s boxing convention.  The event will be held from Wednesday, September 24th through Saturday the 27th with the official opening on Thursday morning.

The convention is the first of its kind for female boxing.  Aside from the social aspect of the event, there will be award ceremonies, and in one of the most important aspects of the gathering, a 10 and a half hour slot dedicated to the discussion of the current state of women’s boxing and ways to promote and improve the sport while keeping its participants safe and healthy.

In recent years, interest in the female side of the “sweet science” has greatly diminished in the United States where a female contest rarely gets attention or God forbid television coverage.  Lou DiBella of DiBella Entertainment is one of the few promoters that showcase women boxers, New York fighters Heather Hardy and Sonya Lamonakis making regular appearances on his “Broadway Boxing” series.

After an initial surge in the 90’s where Christy Martin and Mia St. John were among the fighters that got regular television time, it’s been shown little love.  Former world champion Laila Ali kept the sport treading water but since her retirement in 2007, it’s become just about non-existent despite the fact that women boxers are now more talented and skilled than ever and there’s a greater depth of talent to showcase.  State side fighters are often put in apposition to travel to their opponent’s home countries to secure a reasonable paycheck or a title opportunity.

The inclusion of women boxers in the 2012 Olympic Games did little to garner interest, despite two of the three U.S. representatives being the only two fighters, including the men’s team, to medal.  Clarissa Shields brought home a middleweight gold and Marlen Esparza took bronze as a flyweight, while all but one of their nine male counterparts were eliminated before the medal round, and one was eliminated in the quarter finals.

Sue TL Fox, a former professional welterweight in the late 70’s has done her part in keeping the female side of boxing alive, creating the Women’s Boxing Archive Network as well as the newly formed International Boxing Women’s Hall of Fame, whose inaugural class was inducted this past July.  Sue will be in attendance as well, serving as a presenter and as a participant in the panel discussions.