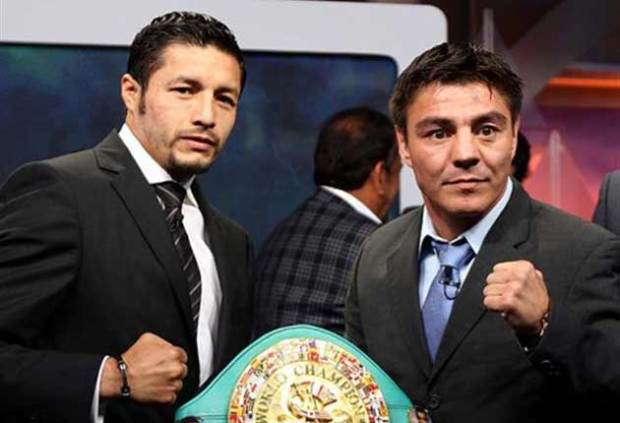 Boxing fans love Mexican fighters. Put quite simply, Mexican fighters are always guaranteed to entertain, from the talented, to the not so talented. Even the most limited of Mexican boxers can usually be counted on to fight their hearts out, until the fight ends, one way or the other. It is hardly a surprise when two Mexican’s clash together the results are often a good old fashioned classic slugfest, which is perhaps not for the squeamish. Combine two Mexican world champions and you have the recipe for something a little special.

Together, each of these fighters has spent the best part of two decades epitomizing how fighters in the lower weight divisions may be small in stature, but are often large on action and excitement. Both have engaged in countless ring wars and their impending collision looks destined to be anything other than dull or boring.

Arce is a no-nonsense all out fighter, who tends to turn every fight into a brawl.

It seems as if he has been around forever, and in boxing terms he has, having turned professional in 1996, and won his first world’s title just two years later in 1998. Arce had a meteoritic rise early in his career, and then withstood the kinds of setbacks that would have discouraged many other fighters, to keep his position as a world class fighter right up to today. In the course of his career travels, Arce has won world titles in four divisions, light-flyweight, super-flyweight, super-bantamweight, and bantamweight. One of the possible prizes in store for Arce, should he emerge victorious this Saturday, is that victory will make him the first Mexican boxer to win world titles in 5 different weight divisions.

Yet, now at age 35, Arce faces a tough task against defending champion Gonzalez, if he is to claim his record fifth world’s title.

Jhonny Gonzalez was considered by many to be on the down side of his own career when he faced the undefeated Abner Mares in August of last year. However, he produced one of the upsets of the year by knocking out Mares in the first round, snapping his undefeated record, and taking his world title in the process.

At 33 years of age, Gonzalez is hardly a freshman himself to the ring. Having turned professional in 1998, Gonzalez had a slower burning career to Arce, having to wait until 2005 before he picked up his first world championship. This slower burn has meant that Gonzalez has accumulated a significantly less amount of ring-wear than Arce. The champion has fought in nine fewer fights and swapped leather in 113 less rounds than his challenger.

In addition to being the fresher fighter of the two, Gonzalez also has the advantage in this match of being the naturally bigger man, having won his first world title at bantamweight, before moving up eventually to featherweight. It is an edge that may very well turn out to be a crucial factor when the two men fight on Saturday.

Although no stranger to toe-to-toe ring warfare himself, Gonzalez is more a box-fighter than a straight all-out slugger, and despite the miles on his own body clock, he has retained most of his speed and sharpness– Unlike his challenger, it would seem.

For all his longevity, there is little denying that Arce has been looking increasingly battle worn over the past few years. In fact, one has to go back to Travieso’s upset victory over Wilfredo Vasquez Jr. on May 7, 2011, when Arce captured the WBO world super-bantamweight championship, for his last vintage performance. That Arce was already considered by many to be on the slide before the Vasquez Jr. match, underlines both his stubbornness and tenacity, and why the odds are stacked against him when he faces Gonzalez.

Since the Vasquez Jr. victory Arce’s performances have steadily become more erratic and laboured. On December 15, 2012, Arce’s career seemed to be over after he was knocked out in the 3rd round by Nonito Donaire in their fight for the WBO super-bantamweight title. Arce announced his retirement following that defeat, after a performance in which he had looked slow and faded, and just a shadow of the fighter who had beaten Vasquez Jr. barely 18 months before.

Like so many other fighters, Travieso couldn’t keep away and was back in the ring before a year had passed. He has won three fights in a row on his comeback, albeit against lower level opposition. Despite the drop in the level of opposition, Arce has been showing his age in his most recent outings. Always a come-forward, all-action battler, Travieso now fights in spurts, and struggles to keep up a fast pace. His aggressive charges that he is so well known have been reduced to lunges, and the defence, which was never his strongest asset, has now become almost nonexistent.

Yet, how much of this decline is down to real physical deterioration and how much of it is down to Arce simply not being 100% fired up against lower level opposition.

Travieso’s big hope must be that the chance of yet another world title can spark something within him that will allow him to reach back and produce some of his old form from 3 or 4 years ago. He is bound to be highly motivated for a fight that almost certainly represents his final shot at a world title. Then there is the added factor of the show being staged in his hometown. Arce has already said that should he lose this match, he would most likely retire, but if he wins he would carry on fighting.

Saturday night will either be his swansong, or another memorable night within an already memorable career. Either way, it is natural to expect that Arce will enter the ring on Saturday in the best shape possible at this point of his career and determined, win or lose, to give a memorable performance in front of his hometown fans.

At first glance, Gonzalez seems to be so much the favourite in this fight that there seems to be a chance that this could become a blow out. There is definitely a possibility that Gonzalez will stop his challenger early, if he catches him right. If nothing else, Gonzalez’s win over Mares showed that the champion has one of the most dangerous punches in the lower divisions. With his aggressive lunges, and slowed reactions, there is a danger that Arce will just be a sitting duck for the rangy and powerful champion.

However, Travieso is one of those fighters whom you write off at your peril, and despite his impressive recent run, Gonzalez has a vulnerability that will give his challenger hope. The champion can be hurt and dropped and also has a susceptibility to cuts. There remains the chance that if Arce can recapture some of the form that he showed against Wilfredo Vasquez Jr., he will have the chance of pulling off another upset. Arce needs to work his way past Gonzalez’s long 69-inch reach and get inside where he will look to rough up and wear down the champion. The challenger’s only realistic chance of victory is to be able to work on the body, and therefore nullify much of the long-armed Gonzalez’s effectiveness.

If Arce can drag the champion into a close quarter’s brawl, then we could see him pull off a victory that will rank as one of his finest achievements. Even in this era of multi ‘world titles’ winning a world championship in 5 different divisions, over the course of 16 years, would be quite an achievement.

The question is, does Arce have enough left in the tank to pull off such a victory? There comes a point in every fighter’s career when the engine just won’t fire anymore, no matter what the motivation.

Part of the fascination of this fight is the number of possibilities as to how it could turn out. We could see a relatively comfortable victory by Gonzalez, using his extra speed and size to keep Arce at the end of his jab, then pot-shotting him with power punches as he tried to barge his way inside. If the fight goes this way, and then the chances are that Arce will be stopped by the mid-rounds on cuts.

There is also the possibility of either of these men being counted out early, if he gets tagged by the other, although there seems to be more likelihood of Gonzalez stopping Arce this way, than Arce knocking out Gonzalez. Arce’s best chance would seem to be to weather the early rounds and then attempt to grind down the champion. The possibility of cuts playing a role in this fight is also strong and perhaps more of a danger for Gonzalez.

Overall, this seems to be a fight that is Gonzalez’s to lose. He has clear advantages in size, freshness, and how much closer he is to his physical peak compared to Arce. Other than his huge experience, stubborn heart, and the fact that the fight is taking place in front of his hometown crowd, Arce has little in his favour going into this showdown. On the face of it, Gonzalez should be able to out-box and out-punch Arce, to score a bloody stoppage defeat somewhere between the 5th and 8th rounds.

Beware of the underdog, especially when that underdog is Jorge Arce.

One thing seems certain; this isn’t going to be decided by the scorecards (unless it goes to a technical decision due to a cut.) It might not turn out to be pretty, but it’s not liable to be boring either.