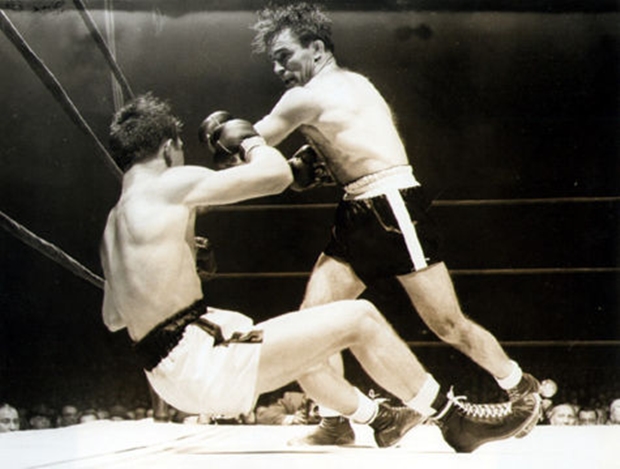 “Few Men in New York have ever had so many friends. Once you knew Lavern you always felt you gained a friend.” — Raymond “Laverne” Roach’s Pastor Romaine F. Bateman’s eulogy

On March 12, 1948, young and promising boxer Raymond “Laverne” Roach (23-1) was badly beaten by the legendary Marcel Cerdan (105-2 at the time) in front of an astounding 17,000 fans in Madison Square Garden. Cerdan, miffed because he was only a 2-1 favorite, clubbed Laverne (23-1) to the canvas three times in the second round and four more times in the eighth as his monster blows continued to rain down upon the handsome rawboned Texan. The slaughter was finally and mercifully stopped after eight punishing rounds.

The Texan had been brought along too fast to fight the likes of the great Frenchman, even though Laverne had easily taken the measure of tough and heavily favored Tony Janiro (63-4 coming in) two months before.

Two things contributed to Lavern’s elongated beating. First, when he had been drilled and mugged to the canvas in the second round, he was dazed and waited for the count, but timekeeper Jack Watson didn’t begin one until the referee ordered him to do so. Watson finally got his act together and Roach got up at the count of nine with the entire fiasco using up 32 seconds. As it turned out, the ex-marine would have been better served had he been counted out.

The second thing was the fact that just when Roach appeared ready to go, his fighting heart allowed him to fire back with just enough to stay in the fight. In fact, he was still countering in the seventh, but things finally ended in the eighth stanza when referee Artie Donovan put an end to what had become a merciless slaughter as Laverne crawled helplessly around the ring. The accumulation of brutal punishment and numerous knockdowns over eight rounds had been mindboggling. Still, up until that beat-down, Laverne’s sole loss came at the hands of rugged New Yorker Artie Towne, a gifted boxer with a great record (who fought as one Henry Johnson when he beat Roach). In fact, Roach had been Ring Magazine’s Rookie of the Year in 1947.

After Cerdan, Roach said goodbye to boxing and went back home to peddle insurance, but he would make an ill-advised comeback in the ring, perhaps –because of the Cerdan massacre– as badly damaged goods. He would go 4-2 before meeting talented Georgie Small (38-6) on February 2, 1950 at the fabled St. Nicholas Arena in New York.

In this much-anticipated matchup, Roach was well ahead and seemingly on his way to an easy points win. His “reward” would be a match with Sugar Ray Robinson. Suddenly, Small uncorked a desperation shot in the eighth stanza that landed squarely on the ex-Marine’s jaw and the tide changed just like that. The blow ripped into Roach like a sledge hammer and the blood immediately gushed from his lips and mouth. Bleeding profusely and staggering, he managed to hang on until the bell rang. Fortunately the fight had been televised in black and white, as the amount of blood that flowed was beyond description.

While Laverne somehow made it through the ninth using every survival trick he knew, the now one-sided turnaround continued through the tenth until another crunching right put Roach down like he had been pole axed. The fans at ringside were shouting for referee Frank Fullam to stop the beating and he responded the right way. However, as he stepped in, another shot came whistling in and sent Roach sprawling. The damage had been done.

As Lavern lay glassy eyed on the blood-spattered canvas, he seemed to know what was happening. He told the ref “I’m all right,” but then, the likable Texan suddenly went slack eyed and unconscious and lapsed into a coma. The fans yelled “oh no, oh no.” Their instincts told them that were witnessing something very bad—something very tragic. Fourteen hours later, Raymond “Lavern” Roach, just 25, passed away from a dreaded subdural hemorrhage in nearby St. Clare’s Hospital.