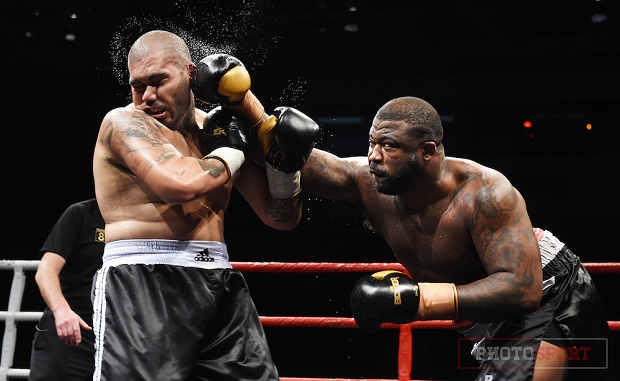 “I’m thrilled to be part of this historic event with Hank Schwartz and on demand and pay per view systems. This marks another major step in the promotion of the Montego Bay Convention Centre to the World. The primary goal is to give boxing fans the fights they want to see. By taking the best fighters who will actually fight anyone in the heavyweight division, will not only bring back the excitement to the sport of boxing for the fans, it will also help the fighters get the biggest fights for many years to come”— Dittie Guise, General Manager of the Montego Bay Convention Centre.

“When Hank Schwartz first contacted me about this tournament, his vision was simple. He wanted to bring the excitement back to the Heavyweight Division…” -Billy Calogero.

There will be a total of sixteen (16) Heavyweight participants and four (4) alternates for the Tournament. The World Television Heavyweight Boxing Championship Tournament, which begins on Friday, November 28, 2014 at the elegant Montego Bay Convention Centre in Jamaica.

The first eight selectees are::

Alonzo Butler is 29-3-1 and is a well-traveled heavy who has fought dreadful opposition over the years. In fact, he beat Danny Wofford (17-84-2) by points in his debut and followed it up with a stoppage over horrific Frankie Hines (14-106-5). His last win was over limited and chinny Louis Monaco in December 2013.

Mike Marrone is back after a 3 –year layoff, and while he won his first 18, his streak was ended by Francesco Pianeta in Germany in 2008. Mike will have trouble in this Tourney
Rhode Island’s Jason Estrada also started fast and has gone up against relatively tough opposition. He has won 5 of his last 6. I like his chances here.

I know nothing about global road warrior Shawn “The Sniper” Cox except that he has lost 4 of his last 5 all by KO. He did ice Wayne “Big Truck” Braithwaite in Guyana in February 2012 but that was then and this is now.

Zumbano Love’s claim to fame is that he has won a bunch of regional titles in Brazil but stumbles when he fights elsewhere. He did extend Shannon Briggs 12 rounds, but aside from that he remains a mystery.

Greg Brady lost his first fight in 2011 and then won his next 5 all by KO against equally unknown fighters. He will not do well in this tourney.

Mike Sheppard is 21-17 and has lost 5 of his last 6. He is 39 and has lost to some notables like Antonio Tarver, Ruslan Chagaev, Brian Minto, Vinny Maddalone, Dennis Boytsov, Chauncy Welliver, Ramon Garbey, Joey Abell, and Clifford Etienne way back in 2004. Mike will not last long here.

Frans Botha (48-11-3) is a somewhat tragic figure who no longer should be fighting at age 46. He has been through too many wars and has lost 7 of his last 8. I’ll be rooting for him for old time sakes but getting beaten by the likes of Sonny Bill Williams does not bode well for the White Buffalo.

The remaining eight fighters and the four alternates will be announced soon. And For any fighters that wish to be considered as participants, please contact: Bill Calogero at Bill@BillyCBoxing.com who has been retained to organize a field of Heavyweights to compete in the Tournament.

It’s easy to make light of something like this, but I, for one, will definitely be watching this and supporting the concept. Anything that is new and/or novel can only help the business of boxing. (much like the Prize Fighter Tourneys in the UK). Moreover, the winner of this event will earn some gravitas and may find himself in the mix for a decent payday.
One other thought, though admittedly a reach. Shannon Briggs has been screaming for a title fight. Well, get him into this as the odds on favorite. If he wins it, the green light just might go on.