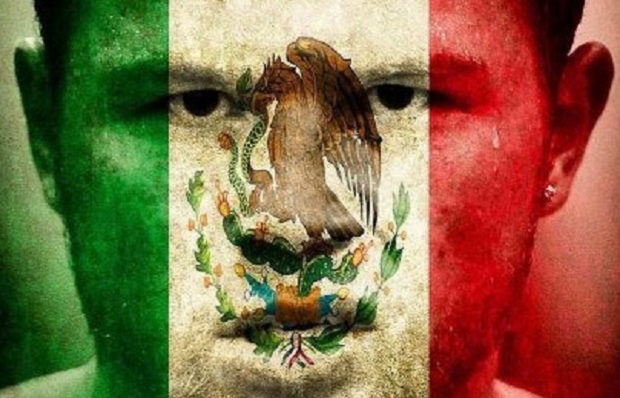 Often, the animosity between fighters or rival promoters is part of the show, a psychological ploy to get over on the other guy and/or the creation of an us vs. them dynamic with which to hook fans into the drama. In the case of Floyd Mayweather Jr. and Oscar De la Hoya, though, the animosity is very real.

The De la Hoya-Mayweather beef goes back to their record-breaking PPV bout in 2007. The newly-created 24/7 documentary format allowed fans to see an extended and intensified version of the usual pre-fight trash talk that goes on before a major fight. And what they saw was a Floyd Mayweather who not only promised to take the torch from De la Hoya as boxing’s biggest star, but to snatch it from the Golden Boy’s hands, tie it to the bumper of his white Lamborghini, and race down the strip with it trailing behind, making sparks while he laughed and tossed hundred dollar bills out the window.

Add to the mix a close, disputed split decision in the actual bout and then seven years of Oscar having to work alongside Mayweather as Golden Boy president, sacrificing his fighters, one after another, in order to keep Mayweather rich and powerful beyond comprehension.

Mayweather has long held disregard for De la Hoya as well, both as a fighter and as a promoter, frequently snubbing him in favor of Golden Boy CEO Richard Schaefer, who did much of the actual heavy lifting when it came to putting Mayweather’s fights together.

Mayweather went so far as to tell the public, during a high profile press conference prior to his bout with Saul Alvarez last year and in De la Hoya’s presence, that “Richard Schaefer is Golden Boy.” It was a move that left Oscar De la Hoya on stage, fake-smiling, and seething at having been humiliated by a smug, taunting Mayweather on what should’ve been a huge day in his career as a promoter.

Yes, the animosity is real.

And although the hate is there and the animosity has grown with each passing day, De la Hoya had no means by which to exact revenge, other than to offer up yet another foe for Mayweather and hope for the best in the ring.

Now, however, De la Hoya not only has a chance to get back at Floyd, but he has a chance to screw up Mayweather’s entire operation– and it all begins with a 24-year-old redhead from Guadalajara, Mexico.

Saul “Canelo” Alvarez has never been a typical young man. At eighteen years of age, he was already talking about beating guys like Mayweather and earning all-time great status as the head of his own promotional firm. By 21, there was already talk of him regaining the fight dates of Cinco de Mayo weekend and Mexican Independence Day weekend that Mayweather had completely co-opted as his own after beating De la Hoya.

The desire to take back his national holidays even pushed Alvarez, who lost to Mayweather in a September 2013 bout that would break records as the biggest money generator of all time, to recently walk away from a lucrative Showtime deal and sign a multi-fight contract with HBO, his old home network.

“There were many factors involved in making the decision but recouping the dates (was important),” Alvarez said after the deal with HBO was announced. “I always wanted to fight on Cinco de Mayo (weekend) and in September (on the weekend of Mexican independence day) because being Mexican those are always the dates that are celebrated and I am excited to fulfill my dreams of continuing that Mexican tradition.”

De la Hoya, of course, is extremely pleased at this turn of events, although he has publicly played it off as merely doing his duty as a promoter.

“Canelo Alvarez gave me my marching orders and that is fighting in May of next year and September of next year so, as his promoter, I have to do whatever I can to make that happen for him,” De La Hoya said.

Not surprisingly, President of HBO sports, Ken Hershman, echoed the words and feelings of Alvarez and De la Hoya while laying down some smooth corporate double talk.

“This is not meant to be any declaration of war or any kind of a challenge,” Hershman said. “It’s just that Canelo feels very strongly as a Mexican fighter that he wants to be able to be give his fans mega boxing events on those dates and that’s his objective. I don’t blame him. I think he’s right.”

Right now, the talk is of Alvarez meeting Miguel Cotto in a blockbuster bout on May 2 and, reportedly, all efforts are being made to get this bout signed and official as soon as possible. There are few guaranteed blockbusters in this sport, but Alvarez-Cotto, with their energized respective Mexican and Puerto Rican fans in full support mode, would appear to be one of them.

Meanwhile, Mayweather remains the biggest draw in the sport– by far– but is out of viable opposition. Other than the perpetually out-of-reach mega-bout with Manny Pacquiao, there’s nothing really out there that could generate true blockbuster interest.

With the burden of his guaranteed $32 million plus back end sales incentives, a profitable event is no guarantee under any circumstances, but especially without a quality B-Side. And if there’s an A+ PPV happening on the same day, at the same time, a break-even worst case scenario could turn into a tremendous loss for everyone involved in the Mayweather show.

Would, could Golden Boy and HBO be so bold as to go head-to-head with Mayweather?

The answer is a great big “hell yeah” as it would be a chance to push Mayweather completely from his pedestal, right at the end of his career, when his skills are diminishing and the pool of available opposition has completely dried up.

An HBO PPV could easily be designed with relatively low upfront money weighed against heavy back-end sales incentives for both Canelo and Cotto, as well as a slightly lower sales price for consumers. Even with a conservative estimate of 500,000 buys, both fighters could take home anywhere from $10-15 million.

Meanwhile, that conservative estimate of 500K would be pulled, to a great degree, directly from the group that otherwise would’ve purchased the Mayweather fight.

And if new De la Hoya buddy and fierce Mayweather rival, Bob Arum, would like to stick a dagger into the heart of his enemy, he very well could offer to donate a quality undercard bout to the Canelo-Cotto card in exchange for future considerations. Can you imagine Brandon Rios-Mike Alvarado III as the Canelo-Cotto co-feature?

More and more, it seems that if Golden Boy and HBO would push the issue, Team Mayweather would have no choice but to move, but don’t expect Mayweather to cop to that.

“Yes, I plan on fighting in May,” Mayweather recently told Fighthype’s Ben Thompson. “I mean, Canelo can fight on that date. He can fight in Mexico on that date.”

Mayweather clearly won’t budge as he feels that, as undisputed top draw, he should have first pick of fight days.

However, that only holds water because other fights wouldn’t have a chance at competing against a typical Mayweather show. Even Arum has been careful to not book Manny Pacquiao anywhere near Mayweather.

But Golden Boy and HBO see Alvarez as a long-term investment. They know that part of taking the throne as this coming generation’s undisputed top draw has to involve beating Mayweather– and since Alvarez couldn’t do it in a face to face confrontation, the passing of the torch will have to take place via hostile consumer takeover.

Although they may never admit it, those involved in a Canelo-Cotto PPV may be fine breaking even or even losing money if it meant pushing Mayweather’s next show deep into the red. Canelo-Cotto doesn’t have to outsell a Mayweather show, head to head, to be successful. All it has to do is draw away enough interest to make the Mayweather PPV an economic bust. From there, the suits with the plans and all the money behind the scenes will put the pressure on Mayweather to step aside.

The idea is to bring Mayweather down and then slowly lift Alvarez– in that order. And while Alvarez is nowhere near powerful enough, yet, to bring “Money” down on his own, he certainly can wreak havoc on Mayweather’s comfortable cash flow and reputation as the untouchable King Midas of boxing.

Expect Mayweather’s many enemies to lend every bit of support possible to the changing of the guard. With only two fights left on his Showtime contract and few truly viable opponents left, Mayweather is a lame duck King of Boxing.

A renewed focus will be placed on his outside-the-ring personal issues, expect his lifestyle to be attacked more than ever before, expect that every bit of negativity surrounding Mayweather will be brought back to the surface and once again held up for public scrutiny. Consider these favors from the media in the effort to bring down a man who never quite stroked their egos enough to get the type of free pass many other fighters get.

2015 may get very difficult for the five-division champ and the taking back of the Mexican holidays will just be symbolic of the effort to destroy all things Mayweather before the man can get to his career finish line.

If Canelo and Cotto take May 2, expect the buzz to start almost immediately about Canelo, should he win, moving on to face Manny Pacquiao on September 12.

If that happens, it means that Mayweather would’ve had to acquiesce to the whims of the Mexican kid he nearly shut out in September of 2013. It would be the professional equivalent of an active President of the United States choosing to clean out his office and give up the presidency before actually finishing his term.

But, again, it’s hard to imagine Mayweather going out, to any degree, without a fight.

“De La Hoya is a piece of shit. Oscar is a snake!” Mayweather recently told Fighthype. “I don’t take nothing away from Canelo or Cotto. I truly believe that Canelo is going down in the Hall of Fame and Cotto as well, but like I said before, when you’re talking boxing, you’re talking Mayweather.”

You can email Paul at paulmagno@theboxingtribune.com if you like or simply say catty things about him on social media, like your favorite fake mean blogger/Ring Magazine reject does. You can also buy his book, Notes from the Boxing Underground! Paul is a full member of the Burger King Kids’ Club, a born iconoclast, and an ordained minister in the Universal Life Church.