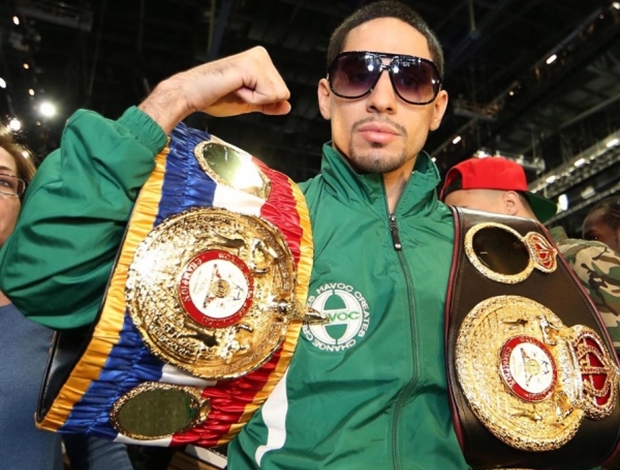 If there was anyone qualified to write the definitive handbook on how to destroy a fighter’s public image, it’s Danny Garcia– or, more accurately, the person behind Garcia’s recent career decisions.

Coming into 2014, Garcia was riding high on a wave of public support after his 2013 victory over Zab Judah in April and the shutdown of fearsome killing machine, Lucas Matthysse, in September, on the Floyd Mayweather-Saul Alvarez undercard.

There was pound-foe-pound talk for the 25-year-old from Philadelphia and just a general feeling of good will for the young fighter as someone “doing it right” by eliminating the veteran hanger-on like Judah and Erik Morales, while taking on the young studs like Matthysse and Amir Khan. If Garcia had passed through 2014 with wins over names like Ruslan Provodnikov and Lamont Peterson on his resume, there would’ve been premature Hall of Fame talk for the young world champion with still so much career ahead of him.

Instead, Garcia began his year in March with a cynical and ill-advised attempt to pander to his Puerto Rican roots against veteran spoiler, Mauricio Herrera, in a supposed “Homecoming” bout held in Bayamon, Puerto Rico.

Receiving just a tepid response from the Puerto Rican fans, things got even dicier when Herrera outworked and outhustled the defending WBC/WBA champ, but found himself screwed on the scorecards and the recipient of a majority decision loss.

Garcia followed up that public relations disaster with lots of hemming and hawing about who to fight next before settling on an undersized and deeply overmatched Rod Salka.

The Pittsburgh-based Salka, a light-hitting natural lightweight, was ranked no.71 in the 135 lb. division by Boxrec at the time. The bout was such a blatant mismatch that even the nefarious WBA and WBC championship committees refused to sanction the bout as a title match.

But instead of ditching Salka after the sanctioning bodies walked away, Garcia’s team used the bout’s unsanctioned status as an excuse for Garcia to cut training and stop trying to make the 140 lb. limit.

Garcia-Salka would be repackaged as a 142 lb. catchweight bout, becoming even more of a mismatch.

Predictably, a Garcia who hulked over his hapless opponent, won in a blow-out, brutally knocking Salka out the very first time he let his hands go in the second round.

After the fight, Garcia would double-down on the rhetoric coming from his team and try to rationalize Salka as a qualified opponent while simultaneously and subtly distancing himself from questions about fighting anyone actually worth fighting.

Garcia would just say this regarding what fans could expect from him in the future:

“You can expect Danny “Swift” Garcia to keep entertaining the crowd. From the ring entrance to the walkout song to the Instagram to the Twitter to my website to my clothes, I’m just gonna keep on entertaining.”

Notice that nothing was said about the actual fights. After making $700,000 for fighting a made-to-order walking punching bag like Salka, it’s easy to see how the real grind of battle may be significantly less appealing than a world full of soft touches wrapped around ring entrances and fashion statements.

Garcia would then cap off a disgraceful 2014 by paying “step aside” money to WBC no. 1 contender, Viktor Postol while issuing a statement that shows a true lack of self-awareness, especially in the Salka aftermath:

“No disrespect, but I didn’t even know who Postol was till about a week ago. He doesn’t even have any notable wins.”

Garcia still has a chance to salvage a lost year in the eyes of the public, but as time passes, that possibility looks less and less like a reality.

And it really is such a shame because Garcia is that good and can stand up to the best of the division. As the promotional Cold War thaws out, even more possibilities will start to present themselves and a true legacy can be achieved by the 20-something battler.

However, in roughly 180 days from March to August, Garcia went from a beloved future superstar in the eyes of the hardcore fans to a walking punchline and the crown prince of cherry-picking internet meme subjects. It’s going to take some hard work to win back the public’s good will.

But this can all change for the better, just as quickly as it changed for the worse. The question is whether Garcia is now more entertainer than warrior– and that’s a question only he can answer.