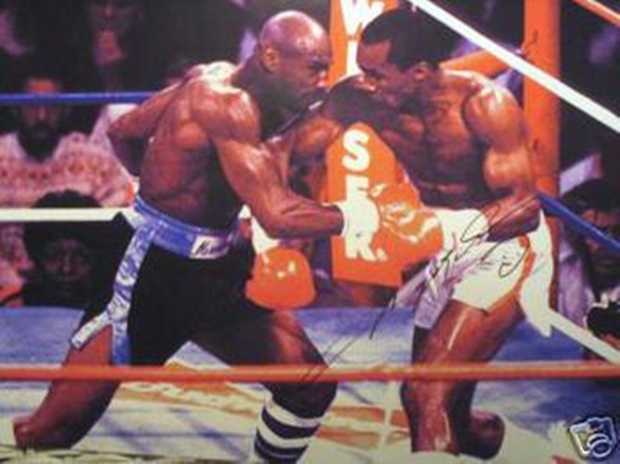 One of the most controversial decisions and biggest upsets in boxing history came on April 6, 1987, as Sugar Ray Leonard outboxed Marvelous Marvin Hagler over 12 rounds en route to a split decision win that ignited a firestorm of dispute at the time but which was, strictly speaking, in line with the press row consensus scoring (Wikipedia, aggregating the scores of the major press outlets covering the fight, shows six cards for Leonard, five for Hagler, and three drawn, although JoJo Guerra’s 118-110 score for Leonard remains a travesty of the highest order.)

There was so much in question in this fight.  Why did Hagler box out of the orthodox stance for the first two rounds?  How did nobody in Hagler’s camp know that Leonard had been engaging in “live” sparring (under actual fight night conditions, with a referee and judges and fight-night gloves rather than sparring gloves, proper rounds and rest, the whole nine yards) behind closed doors?

It’s hard to believe Marvin Hagler was a shot fighter, even after the wars he’d been in against Thomas Hearns and John “The Beast” Mugabi over the previous two years.  Let’s summon the chaos butterflies and take a look at what might have been:

April 6, 1987: Marvelous Marvin Hagler KO3 Sugar Ray Leonard
Hagler came out in the southpaw stance, not messing around, looking to catch Leonard and pour on the aggression early, using his natural strength and size advantages—Hagler, who turned pro at middleweight, had been at or above 160 his entire career, and even had a few fights at light heavyweight, was in with a guy who’d turned pro at welterweight and had fought only twice at middleweight, neither time against world-class opposition—to do to Leonard what he’d done to Hearns two years before.

Despite his best efforts to ring rust-proof himself, Ray Leonard was overwhelmed, and even though he tried to make use of a ring big enough to graze a cattle herd in, and even though Leonard tried to spend more time on his bicycle than Daffy Duck in Porky and Daffy (Tex Avery’s 1938 ode to the silliness of boxing metaphor), Hagler stalked him with the determination of Jason Voorhees in his prime.

Landing several body shots in the first two rounds, Hagler took the steam out of Leonard, making it easier to hunt him as Leonard wilted from the pressure.  Finally, right before the bell at the end of round three, Hagler landed a crushing right hook on the temple that sent Leonard unconscious to the canvas.  Referee Richard Steele could have counted to a thousand, but he didn’t get to one before waving his arms and stopping the fight without a count.  Marvin Hagler was still middleweight champion of the world, with only a few fights separating him from Carlos Monzon and a place in middleweight immortality.

October 23, 1987: Marvin Hagler KO4 Sumbu Kalambay
A planned fight with Iran Barkley for Kalambay fell through, as the WBA mandated the Congolese fighter as the next defense for Marvin Hagler.  Kalambay, with three losses already at this point in his career and having been on the floor in fights against Ayub Kalule and Duane Thomas (who?  Exactly), was ill-prepared for the unrelenting force that was about to be issued to him by a rejuvenated champion who a year before had been considering retirement but who had the wind put back in his sails by taking the bluster out of Ray Leonard six months prior.

Iran Barkley was ringside at this fight, watching with great interest, jawing to the press and trying to take some of the night’s thunder for himself, insistent that he, not Kalambay, should have been in there, and that furthermore the result would be different if indeed the New Yorker had his way.

After disposing of Kalambay, Hagler was asked what he thought of Iran Barkley’s boasts, and Hagler was dismissive, calling Barkley a “bum” and a “nobody”, and that Barkley would need to prove himself worthy before Hagler would waste his time on him.

March 6, 1988: Marvin Hagler KO3 Thomas Hearns
Same fighters, same distance, same result.  This was a cash grab for the promoters and the fighters alike, an attempt to puff up a guy that Hagler had beaten once and would beat again, this time with a lot less effort required insofar as the cut that opened up on Hagler’s forehead in the first fight had no such counterpart hindrance here.

The net effect of this fight was that it removed Hearns from consideration as a potential opponent for Iran Barkley, who had been eyeing a fight with the Hitman in June.  Barkley instead pulled some promotional strings and got himself onto the pay-per-view undercard for Tyson-Spinks, where he would make a statement to the champion:

June 27, 1988: Iran Barkley KO1 Mike McCallum
On a night of knockouts, the debate would rage which was the more vicious—Mike Tyson’s demolition of Michael Spinks in the main event, or Iran Barkley’s forty-second slaughter of McCallum in the pay-per-view opening television bout.

Barkley said before the fight that he was going to bring the wrath of God down on Mike McCallum, that he was going to “imagine Marvin Hagler’s face on him every time I throw a punch.”  Promoter Don King was only too happy to oblige, the opportunity to create a rivalry for a superfight too delicious to resist.

Barkley delivered on his promise.  The very first punch of the fight put McCallum on the floor, a hook that connected for what many thought was a flash knockdown but for the fact that McCallum wasn’t up until the count of six.  Seeing his opponent pulling a Serengeti gazelle routine, Barkley unleashed a barrage, capping it with a shot that would deal a decisive blow to any speculation that Mike McCallum was in any way fit to be seen as a challenger for the middleweight championship of the world.

After the fight, Barkley said in an interview, “Hagler wanted me to prove myself, well, I just beat the number one contender.”  Then, turning his attention directly to the camera: “Your move, champ.”

February 13, 1989: Marvin Hagler KO4 Iran Barkley
After nearly a year off, most of the latter half of it spent in “he said, he said” negotiations between rival promotional camps and television bidding rights wars, the flames fanned by the challenger’s high-profile victory that in any year not containing the Tyson-Spinks fight would have been Knockout of the Year, the fight that so many boxing pundits saw as inevitable came to pass.

Before the fight, Sports Illustrated ran a huge preview in its issue that week, in which Frank Deford pointed out that every time Hagler fought a guy with even a slightly suspect chin, a chin that had to that point been merely a suspect would be rounded up, tried, and convicted in the court of Hagler’s right hook.  While Barkley had never been on the floor to that point in his career, he had also never seriously been tested, and what’s more, Iran Barkley was never known as a defensive mastermind.

This was going to be exactly the sort of fight that bloodthirsty fight fans demand from their boxing entertainment.  Hagler pushed for and got a sixteen-foot ring; as Hagler aged and his speed got away from him, he did not want to give any opponent the chance to run from him the way Ray Leonard had tried to two years before.  Mind you, this fight could have been fought in a prison cell with the same net result, but this only further sharpened the commentariat’s opinion that the last thing any fighter should do is get a granite-chinned Marvin Hagler into a slugfest.

Barkley stood up to the shots well enough for three rounds.  The problem was that while Marvin Hagler was steadily wearing down his opponent with a consistent combination of shots to the body and jabs to the head, Iran Barkley’s best attempts at heavy artillery did not faze the iron man in front of him.  All the talk of Barkley’s “nuclear” power after the McCallum fight and all the bad intentions in the world behind the shots were not enough to dent the chin of Marvin Hagler.

Finally, the immovable object prevailed over the irresistible force; Barkley, loading up on a cross, got caught flush with a counter right hook and the fight was over.

Hagler made three more title defenses in 1989 and 1990, running his overall total to 19, leaving Carlos Monzon in his dust in the process.  The greatest middleweight of all time to this point in history, Hagler swore that he’d retire after making an even 20, setting a mark for all future champions to measure themselves against.  There was only one small problem with this arrangement:

March 31, 1991: James Toney UD12 Marvin Hagler
The up-and-comer from Grand Rapids, Michigan was seen as a good compromise between a legitimate fight and an opponent who was still too green and too unprepared to get a proper title shot.  While the IBF had Toney rated highly, the rest of the organizations had to be convinced to fall into line purely by the promise of a percentage of the take; they otherwise had their misgivings that this was a legitimate title defense.

When the actual fight happened, however, all those questions were answered by a guy who was younger, faster, slicker, and ready for a title run of his own.  As the 1980s had been left in the rear view mirror of history by the turning of the decade, as pop culture prepared itself to leave glam and big hair behind and embrace the coming of grunge and alt-rock that fall, and as the Soviet Union went from the greatest fear of every child to a teetering giant about to crash to the ground as a symbol of a dying age, so too did the man who had been undisputed middleweight champion for eleven years finally fall victim to the cold reality of old age.

The decision was not close.  Toney won at least ten of the twelve rounds on all three judges’ scorecards; Dave Moretti even gave it 120-108, telling Sports Illustrated that “this was an easy fight to score; any judge who knows the meaning of ring generalship could see it.”

For the nearly 37-year-old Marvin Hagler, there was time spent to reflect and consider a comeback, but an uphill battle simply wasn’t in the cards; Hagler formally announced his retirement on July 16, 1991, a surefire Hall of Famer and the greatest middleweight who ever lived.

As for James Toney, beating “the man” lent him a legitimacy that would carry him through the 1990s as a great champion in his own right; a signature win is every boxer’s claim to greatness.  He would, however, never equal Hagler’s greatness; Roy Jones and Bernard Hopkins would see to that.  That, however, is a scenario for another time.

NEXT WEEK: We load up Bill and Ted’s telephone booth and turn San Dimas High into the ultimate historical boxing gym for a heavyweight tournament for the ages!  Be excellent to each other, and PARTY ON, DUDES!

Fox Doucette writes the weekly What If series for The Boxing Tribune and contributes occasional features in the “prime” timeline as well.  He covered ESPN Friday Night Fights for this publication from 2011-13.  Fan mail, hate mail, and who you want to see in the all-time heavyweight tournament can be sent to beatcap@gmail.com.