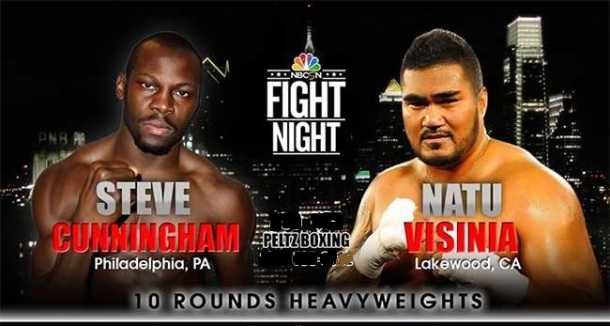 Where most fighters moving up in weight do so for money and notoriety, Cunningham did so out of necessity. It’s a not a simple need of money that drives him to step in the ring against bigger, stronger fighters, but a need to support his daughter Kennedy, who is in need of a heart transplant, and finance expenses that health insurance doesn’t cover.

Seeing a former world champion left high and dry is nothing new, and when Cunningham lost back to back fights to Yoan Pablo Hernandez that cost him his world title, there was little opportunity left for the U.S. Navy veteran in Europe, where he built his cruiserweight championship career. What he told Grantland.com summed it up: “No one wanted to fight me”. His only alternative to prolong his career was to move up with the big boys and return home to the States, which he did in 2012, seven months after the second Hernandez bout.

A win over journeyman Jason Gavern gave Cunningham his first heavyweight victory, but a highly controversial loss in a rematch with Tomasz Adamek, who had beaten him as a cruiserweight four years earlier, followed by a knockout loss to Tyson Fury set him back a bit. He has since comeback with wins over Manuel Quezada and Amir Mansour. Against Mansour he looked all but finished in the fifth round after getting dropped twice, but managed to turn the fight around, dealing Mansour his first pro defeat and winning the USBA heavyweight title.

Against Visinia, he faces an experienced college athlete, having played football for the Southern Illinois University Salukis. He’s also an MMA competitor with a 5-1 amateur record and 1-1 tally as a pro from back in 2007. As a boxer he’s fought infrequently and when he has, hasn’t faced anyone impressive which negates his impressive knockout ratio. He’s only been past the fourth round on one occasion, going six in his last outing in May. He calls himself “The Truth”, but the truth is that basically as a straight forward banger with little defense to speak of, he looks like easy pickings for a guy with Cunningham’s ability and resume.

Cherry has won eight of nine bouts since a decision loss to Timothy Bradley in a 2008 light welterweight title contest, with one no-contest with Eric Aiken three years ago. He was originally slated to face Jerry Belmontes, who pulled out with a wrist injury.

Replacing Belmontes is Akaba, a former regional title holder at featherweight and super featherweight who contested twice for the Commonwealth title, losing on both occasions. After a loss to Ricky Burns in 2008 he racked up 10 consecutive wins before dropping an eight rounder to Bahodir Mamadjonov his last time out.