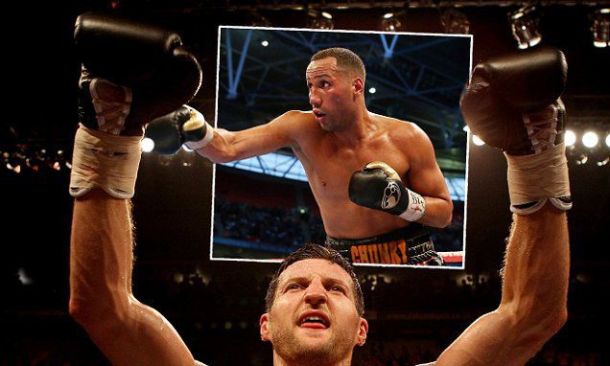 Froch has been looking to set up a Las Vegas bout against Julio Cesar Jr., and even talked of retirement if that fight can’t be made, but word is that the two promoters have been in touch, so the wheels are already in motion. Never having fought in Las Vegas, Froch refers to the town as the ” fight capital of the world”, and a contest held in sin city would be a dream come true.

“DeGale doesn’t make any financial or business sense for me, my promoter or the TV broadcasters”, Froch told BBC Sport. “He has not beaten anyone to justify being in the ring with me. He lost to George Groves. I flattened Groves and it would be even easier to flatten DeGale.” DeGale’s advisor Ambrose Mendy of course, accuses Froch of ducking the London native. Regardless, it doesn’t look like we’ll see Froch-DeGale any time soon.

DeGale is the mandatory challenger for Froch’s IBF belt so opting to face Chavez, Froch would vacate the strap and DeGale instead would face Gilberto Ramirez for the vacant belt assuming he gets past Marco Antonio Periban in November. Mendy also said he looks for DeGale to face George Groves in a rematch next year. Groves beat DeGale in 2011 via majority decision in a fight that was decided by one point.