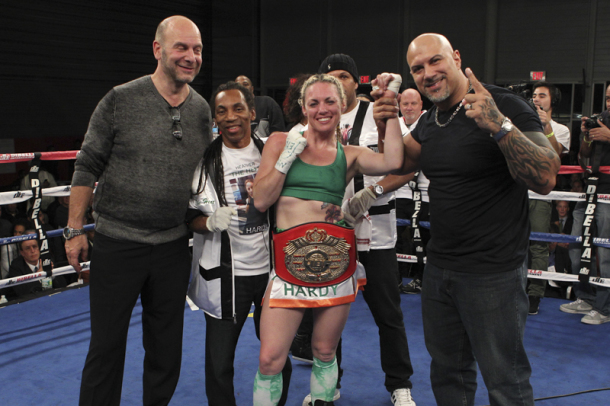 Hardy displayed superior boxing skills over Hoy, setting the pace of the contest, but also displayed effective defense when Hoy fired back. Her ability to avoid her opponent’s punches and counter effectively took the steam out of Hoy’s attack. She was the more effective fighter on the inside as well, getting the better of exchanges when the action was at close quarters.

There was no question with the final result, though one of the scores was a bit off; Hardy took a majority decision by scores of 100-90, 99-91, and an out of place 95-95 to win the WBC International super bantamweight title. It’s the second title for Hardy; last year she won the UBF International title in the same weight class with a second round stoppage of Ana Laura Gomez at the Aviator Sports Complex in her hometown.

This was Hoys sixth contest without a win. Her last victory came in 2010, since then she’s went 0-4-1, 1 no contest with three failed title attempts.

Undefeated Leonela Paola Yudica Andino (8-0-14) defeated world flyweight title challenger Florencia Roxana Canteros (6-7-1) by 10 round decision to win the Argentina flyweight title. This was the first 10 round contest for Andino, who’s been a pro for just over two years. Canteros challenged for the IBF flyweight belt last year, but lost to Gabriela Bouvier. This was her third straight defeat.

Former world super bantamweight champion Ana “The Hurricane” Julaton (13-4-1, 2 KO’s) took to a career in MMA this year and has a record now standing at 1-1 with 1 knockout. After a loss to Ann Osman in August, Julaton and her trainer Angelo Reyes decided it was time to improve her ground game, and have been working with Ricky Lundell, a 2nd degree Gracie Jiu Jitsu black belt with two gold medals in FILA submission grappling and three gold medals in Pancrase submission wrestling. Julaton is looking to be back in MMA action this December.